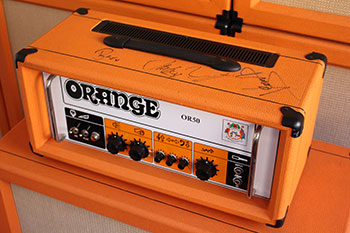 Orange Amplification is delighted to auction a classic OR50 amp signed by Biffy Clyro to raise money for Cancer Research, the charity chosen by Orange Fans. Mike Vennart, Orange Ambassador and longtime session guitarist with the band, toured with this actual amp for four years. It is signed by him and founding band members Simon Neil, James Johnston and Ben Johnston.

Based on the legendary Pics only amp, the versatile OR50 featured a traditional single channel with a three stage gain section and HF Drive control. Its wide range of vintage tones and that classic British Crunch, pay homage to the Orange amps that helped to define the music of the seventies. According to MusicRadar it is: ‘No-nonsense, single-channel simplicity for rock and blues.’ See Orange Amps Technical Director Adrian Emlsey talking about the OR50 here.

Biffy Clyro, one of the biggest bands to come out of the UK, have enjoyed high profile tours with Muse, Foo Fighters and Queens of the Stone Age as well as being festival headliners in their own right. They have released eight, madly innovative albums, the most recent being 2020’s Celebration Of Endings with which they were planning to tour prior to lockdown. They hope to tour October 2021, once again filling venues with bone crunching riffs and rousing choruses and are scheduled to headline the 2022 Download festival.

Talking about the amp Mike Vennart said: ‘This was my amp, I toured it for about 4 years. It’s signed by Simon Neil, James Johnston and Ben Johnston of Biffy Clyro, and myself. It’s an absolute classic workhorse beast of an amp. Never let me down. Goddammit I miss it!!‘

All proceeds from the auction will go to Cancer Research, the charity that works tirelessly to help prevent cancer, diagnose it earlier, develop new treatments and optimise current treatments by making them more personal and effective.