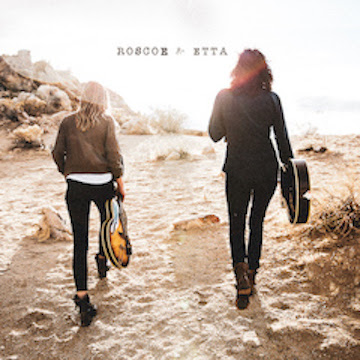 The album features 11 co-produced original compositions, 10 co-written by the duo and a Sharp co-write with Joey Ryan (The Milk Carton Kids) on “Broken Headlights.”  “Joey (with Sara Bareilles) did a beautiful version of “Broken Headlights” a few years ago,” says Sharp, “I was just waiting for the right time to give it another life and this was it. Producing it with Anna helped us uncover the grit to beauty ratio of Roscoe & Etta.” Schulze adds, “The union of organic and inorganic sounds turned out to be a reflection of our complimentary styles.”

Roscoe & Etta was recorded at their respective home studios in Los Angeles with Sharp and Schulze playing all instruments except a few performances by special guests Devon Eisenbarger (guitar) on “Play On,” Vanessa Freebairn-Smith (cello) on “Broken Headlights” and “You Already Know,” Fritz Lewak (drums) on four songs, Joshua Grange (pedal steel) on “Come Back Tomorrow,” and David Ryan Harris (wah wah) on “Stupid Pretty Face.”

A fall tour has been confirmed with stops in Nashville, Louisville, Los Angeles, Pittsburgh, Indianapolis, among many others. In addition, they will open for Edwin McCain September 18, in Greenville, SC. A full list of dates is below.

With seven solo releases and a collaborative project with Art Garfunkel and Buddy Mondlock, the critically acclaimed Sharp is a seasoned songwriter whose songs have been recorded by The Dixie Chicks, Bonnie Raitt, Trisha Yearwood, Keb’ Mo’, Cher, Art Garfunkel, Lizz Wright and others. As a producer, she’s worked with Edwin McCain, Art Garfunkel and Crystal Bowersox.  The Los Angeles native has appeared on Mountain Stage, Acoustic Café, World Café, NPR’s All Things Considered as well as CBS Early Show and the Today Show.

A multi-faceted songwriter, artist, and producer, Minnesota native Anna Schulze’s songs have been featured in the Oscar-winning documentary Icarus, Carmelo Anthony’s This is Melo and MTV’s Awkward. Working under producers Justin Meldal-Johnsen (Beck, Tegan, and Sara, Paramore) and Glen Ballard (Alanis Morrissette, Katy Perry), she learned her way around the studio. Hailed by No Depression as “genuine, dynamic, and insightful,” she’s released five solo albums, the latest Pickford Market garnered raves from NPR’s Morning Edition and MPR’s The Current.

September 12 – One Longfellow Square – Portland, ME