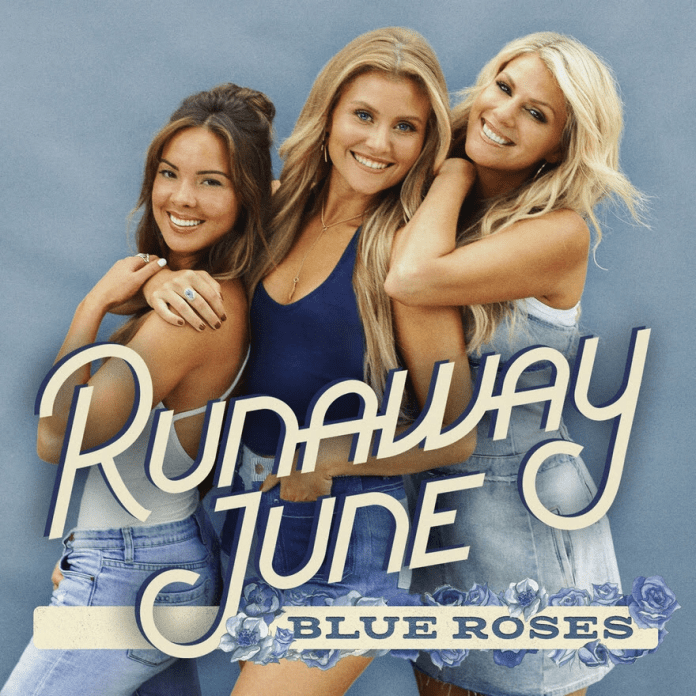 Nashville, Tenn. (May 31, 2019) –RUNAWAY JUNE officially announced today the release date, album cover and track listing for their long-awaited debut album on Wheelhouse Records. Titled “Blue Roses“ the project will be released appropriately in the month of June on June 28th. Produced by Dann Huff and Ross Copperman, the album reaches from the Top 25 anthemic sing along, “Buy My Own Drinks,” which Music Row Magazine praises as a “runaway hit,” to the soaring post-breakup heart-grabbing “I Am Too,” to the poignant and stirring title track “Blue Roses.”

Blue Roses is available now for pre-order digitally and fans will instantly receive four tracks (“Buy My Own Drinks,” “Got Me Where I Want You,” “Fast As You,” and “I Am Too”) with each purchase.

June has always had a special meaning to our band,” stated Jennifer Wayne, of Runaway June. “The name Runaway June is symbolic of the many pivotal moments in our lives and career that happen in the month of June. It’s only fitting that our first album comes out in June!”

Since Naomi Cooke, Hannah Mulholland and Jennifer Wayne formed four years ago, Runaway June has become the first all-female trio in more than a decade to earn three Top 40 hits. They have also become an ACM and CMT nominated band, been named CMT’s “Next Women of Country,” scored major tours and opening slots with some of the biggest names and icons in music (including Garth Brooks and Carrie Underwood), performed on national TV including the CMA Awards, ACM Awards, CMT Awards and TODAY, and received high praise and raves from dozens of critical outlets, all while constantly digging deeper to fill out a sound that connects them to the tradition of Country music and its devoted fans.

We’ve been together for four years now, but this is our debut album,” said Mulholland. “We really harmonized as a band through songwriting and being out on the road, so I feel like, through that journey we were able to learn more about ourselves as people – as women, as performers, as artists – and figure out what we wanted to say, all of that is reflected in these songs.”

Songs like “Good, Bad & Ugly” that dive into the acceptance of being in a relationship, juxtaposed with songs like “Trouble with This Town” and “I Am Too,” that address the universal post-relationship struggles that make up the human experience, round out this first full-length outing from the trio and further cements why they are “a band that’s well on its way to Country music superstardom” (People.com) and the ascending trio “is about to blow up…” (Whiskey Riff).

“The album has many different faces, and it really represents all the sides of who we are. Our songs are deeply Country,” added Cooke. “We aimed to make a compelling record that displays our character, personality and where our heart is. That’s why ‘Blue Roses’ is the title track. It’s a deeply personal song we wrote several years ago, but have kept for something special”

The title track “Blue Roses” is an emotional song that highlights the depth of the album. It was co-written by Wayne and Cooke along with Caroline Cutbirth and Marcus Hummon in the wake of Cooke’s loss of a family member. It took some time before the band was able to embrace the emotions of the song fully to perform it live, but once they did, it came to symbolize the openness of music, which they feel compelled to share with their fans.

The album’s first hit “Buy My Own Drinks,” co-written by all three Runaway June members along with Hillary Lindsey and Josh Kear is currently Top 25 and continues to climb the charts.

Runaway June is on the road through the fall, supporting seven-time Grammy winner and Pollstar’s three-time top female country touring artist Carrie Underwood on the Cry Pretty Tour 360. Sponsored by CALIA, the tour kicked off on May 1 in Greensboro, NC, and will play 55 arenas across the U.S. and Canada promoted by AEG Presents. Tickets for the concerts can be purchased here.

The trio who is nominated for their “Buy My Own Drinks” video is set to perform on the CMT Music Awards on Wednesday night. Vote for them here. Additionally, they will make several appearances across CMA Fest including the Chevy Riverfront Stage, the CMA Close Up Stage in Fan Fair X and Firestone Country Roads Stage at Ascend Amphitheater on Thursday, on Saturday they will perform on the Radio Disney Stage and at Nissan Stadium.