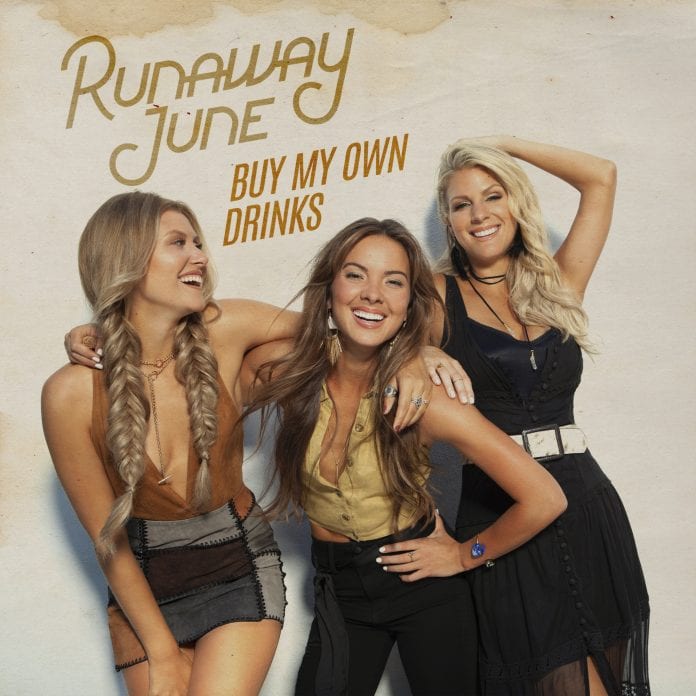 Nashville, Tenn. (June 10, 2019) – Today Wheelhouse Records’ RUNAWAY JUNE triumphs as their smash sing-along “Buy My Own Drinks” becomes the first Top 20 radio single by a Country female band or trio in 14 years. There has not been an all-female group since 2005, when the Dixie Chicks and SHeDAISY regularly topped the charts, to have a song go Top 20 on Country radio. Adding to the merriment, the trio was invited by the Grand Ole Opry to celebrate their album launch day, June 28th with a special performance and signing party.

“We love being a part of Country music! This has been an amazing year, being on tour with Carrie Underwood – and now to having our first Top 20 song and to be the first female group to achieve this in nearly 15 years is insane,” said Hannah Mulholland of Runaway June. “Thank you to our amazing team, and Country radio. We can’t wait to get our album out later this month and share our music with fans out on the road this summer.”

Titled “Blue Roses,” the trio’s first full-length project will be released appropriately in the month of June on June 28th. Produced by Dann Huff and Ross Copperman, the album is available now for pre-order digitally and with each purchase, fans will instantly receive four tracks: “Got Me Where I Want You,” “Fast As You,” “I Am Too,” and the “runaway hit,” (Music Row Magazine), written by all three Runaway June members along with Hillary Lindsey and Josh Kear, “Buy My Own Drinks” which earned the trio a CMT Music Award nomination for Breakout Video of the Year.

Since Naomi Cooke, Hannah Mulholland and Jennifer Wayne formed four years ago, Runaway June has become the first all-female trio in more than a decade to earn three Top 40 hits. They have also become an ACM and CMT nominated band, been named CMT’s “Next Women of Country,” scored major tours and opening slots with some of the biggest names and icons in music (including Garth Brooks and Carrie Underwood), performed on national TV including several award shows and TODAY, and received high praise and raves from dozens of critical outlets—with People.com calling them “a band that’s well on its way to Country music superstardom.”

Runaway June’s Grand Ole Opry event will be the ladies’ first appearance once the album is available and will sign albums after the show. For more details and to purchase tickets, visit here.

After wrapping a hectic CMA Fest week which included performances on the CMT Music Awards, the Chevy Riverfront Stage, the CMA Close Up Stage in Fan Fair X, the Firestone Country Roads Stage at Ascend Amphitheater and Nissan Stadium, Runaway June will return to the road through the fall, supporting seven-time Grammy winner and Pollstar’s three-time top female country touring artist Carrie Underwood on the Cry Pretty Tour 360. Sponsored by CALIA, the tour kicked off on May 1 in Greensboro, NC, and will play 55 arenas across the U.S. and Canada promoted by AEG Presents. Tickets for the concerts can be purchased here.