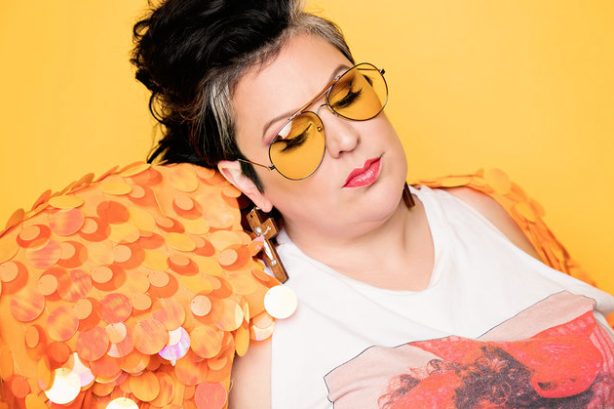 (Earthquake) is a make-up song of seismic proportions…”– Billboard

“Sarah Potenza’s songs may be universal anthems written with inclusivity in mind, but on the lead track off her upcoming album ‘Road to Rome’, she puts the spotlight squarely on herself….brimming with confidence and boasting production that calls to mind the Mark Ronson vibe of Amy Winehouse’s ‘Back to Black.'”- Rolling Stone

After making its premiere on Billboard on Wednesday, “Earthquake”, the latest track off Sarah Potenza’s upcoming LP ‘Road To Rome’ is now streaming everywhere:http://smarturl.it/sarahpotenza.

Billboard calls the track (which Sarah wrote expressly for her husband and collaborator Ian Crossman) “a make-up song of seismic proportions.”

The Nashville based singer-songwriter and vocal powerhouse is perhaps most well-known as a semi-finalist on season 8 of The Voice, but since then she’s gone on to release a critically-acclaimed debut solo LP ‘Monster’ in 2016, which prompted Rolling Stone to gush, “Potenza is to the blues what Adele is to pop: a colossal-voiced singer who merges her old-school influences with a modernistic sound.”

Road To Rome, her second solo LP, will be released on International Women’s Day, March 8th.

Road to Rome’ is an album of self-empowered R&B, swaggering soul, and contemporary blues. Co-written by Potenza, her husband Ian Crossman and friend Justin Wiseman, produced by Jordan Brooke Hamlin (Indigo Girls, Lucy Wainwright Roche), and recorded with a female-heavy cast of collaborators, the record isn’t just her own story. It’s the story of all artists — particularly women, who remain the minority within the male-dominated music industry — who’ve learned to trust their instincts, refusing to let mainstream trends dilute their own artistic statements.

Sarah recently performed alongside acts such as Andrew McMahon and The Wilderness, Matt Nathanson and Plain White T’s on The Rock Boat XIX and will join Melissa Etheridge, Shawn Colvin, Paula Cole and many more on The Melissa Etheridge Cruise III March 31-April 7. She is also scheduled to play in Austin, TX during SXSW. See dates below.

What others have said about Sarah Potenza:

“Potenza is to the blues what Adele is to pop: a colossal-voiced singer who merges her old-school influences with a modernistic sound.”- Rolling Stone

An empowerment anthem can be a beautiful thing, a dramatic transcending of suffering’s isolating power. But what’s glorious about Sarah Potenza’s blistering, riff-propelled personal anthem “M*nst*r” is that it doesn’t seek to transcend the unpleasantness of her reality — the fact that she’s been told countless times in countless ways that the body she inhabits is socially unacceptable. Instead, we hear a woman’s fierce determination to stay present, to stare down those who would shame her, to revel in her corporeality.- NPR (“Song We Love”)

“You won’t find any gimmicks on M*nst*r, just pure unadulterated rock and roll. As such, it should find an audience among Americana/Roots enthusiasts and traditional rock fans. Rolling Stone called her a “rock ‘n soul powerhouse” and Potenza has been rightly compared to commanding divas like Janis Joplin, Etta James even Aretha Franklin. We concur.”- No Depression

“Despite boffo ratings each year, NBC’s The Voice doesn’t have a strong track record of transforming contestants into stars. Hopefully that changes with Sarah Potenza—a casualty during season 8—whose scorching, take-me-as-I-am “M*nst*r,” the title track to her debut album, might be the year’s most spirited girl-power anthem. Potenza cut her teeth singing covers in Chicago blues bars before becoming a fixture in the East Nashville music scene, and she combines a fiery voice and crunchy roots rock with a distinct flair for showmanship.”- Garden & Gun

“Whether you’re new to Potenza or not, you need to hear this voice which has the power not only to move you. She might heal you too.”- Elmore Magazine