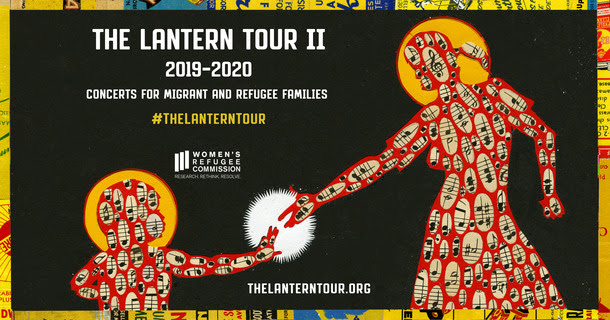 “The Lantern Tour II: Concerts for Migrant and Refugee Families” winter concert will take place on Saturday, January 11, 2020 at the War Memorial Auditorium in Nashville, Tennessee and is part of a nationwide tour happening between fall of 2019 and summer of 2020.

Tickets for the Nashville show go on sale at 10 a.m. this Friday, November 8.

The Lantern Tour II reunites Grammy-nominated and award-winning musicians Emmylou Harris, Jackson Browne, and Steve Earle for the concert series to benefit the Women’s Refugee Commission and its work on behalf of migrant and asylum-seeking families.

“The Women’s Refugee Commission is on the front lines in advocating for the safety of displaced women and children,” said lead tour musician Emmylou Harris, a supporter of the organization.  “I am thrilled to continue this important partnership and to bring my music friends along for another powerful tour in the coming year.”

“It’s an honor to be joining Emmylou on this tour as we stand with migrant and asylum-seeking families at the southern U.S. border,” said Grammy Award-Winning Musician and Indigo Girls Co-Founder Amy Ray. “Everyone has the right to be safe and to keep their children safe.”

WRC has a long history of documenting conditions for asylum-seeking women and children at the U.S. border and advocating for their rights and protection. Since the Trump administration came into power, WRC has taken an even more robust leadership role in identifying human rights violations.

“We go into detention centers to hear directly from women and children about how these policies are devastating their lives,” said WRC Executive Director Sarah Costa. “Right now, more than ever, we need voices from across the country speaking out in support of human rights, which is why this tour is so important. Together, we can make a difference.”