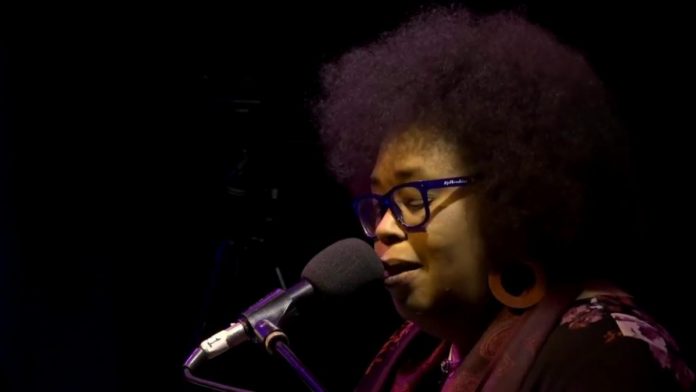 Thanks to the perils of five pandemic-era hurricanes, Americana was recorded across more than twice as many spaces, with the bulk of the load performed in New Orleans at Marigny Studios (recorded by Rick Nelson), and at Bingham’s own Nina Highway in Henderson, Louisiana. After performing for a full house at the New Orleans Jazz & Heritage Foundation’s last show before lockdown, Lewis conceived the album amid quarantine conditions that imposed an indefinite pause in an otherwise booked-out performance year. Without the pressure of upbeat, danceable shows on the agenda, Lewis turned to a bag of story songs that she felt didn’t fit the New Orleans club scene.

The record returned Lewis to her folk and roots origins, and reflects two sides of her America, that of her father’s church, and that of the “white-gaze” world that existed beyond those walls. Reuniting Country with its gospel and blues roots, the country-soul excursion begins with the Texas-tinged, Eliza Gilkyson inspired “Copper John,” but quickly shifts into the Rufus-esque country-funk anthem “Wrecking Ball.” If the heart of the record is found in its benediction “My American Heart,” a song Mandy Patinkin referred to as “like listening to light,” the soul of the collection may be “A Healing Inside,” an a cappella, sober declaration that features Lady A, the Seattle based Blues legend whose name has been famously usurped by the Nashville band formerly known as Lady Antebellum, who changed their name in response to the Black Lives Matter movement.

Of the collection, Lewis says: “these stories were meant to reflect the humanity of the forgotten, because in times like these, it feels like dignity can be really hard to come by.”

Trained as an opera singer and classical pianist, Lewis has been a composer, producer and performing artist for over two decades. She released her first album The Coming of John in 2003, and has been known as the Folk Rock Diva since performing in the Folk Rock band The Shiz, which she founded with her wife Liz Hogan in 2009.

Lewis has issued three critically acclaimed releases on Louisiana Red Hot Records where she serves as VP and the Head of A&R: the 2018 solo piano album The Henderson Sessions, 2019’s We Belong by the Lilli Lewis Project, and the 2020 My American Heart Red + Blue EP, which one reviewer compared to legendary opera singer Jessye Norman, if she had been part of the folk-rock genre. In 2020, Lewis also released a single she co-wrote, co-produced and performed — the “Mask Up” anthem for a public health campaign from Louisiana Red Hot Records and WHIV-FM featuring New Orleans favorites Kirk Joseph, Glen David Andrews, and Erica Falls.

Since the shutdown, Lewis has performed a powerful set for the Kennedy Center’s Arts Across America virtual series, played “My American Heart” for a streaming voters’ rights benefit (where Patinkin became a fan), and performed for WWOZ-FM’s Piano Night virtual benefit. She also was selected to be a Folk Alliance International delegate for Global Music Match, an online collaboration showcasing 78 artists from 17 countries.

Lewis has spent the better part of her 20 year career carving out space for herself in the music industry as an African-American queer woman of size. The Athens, Georgia native has recently been lending her voice to the industry’s need to diversify its precepts by facilitating Folk Alliance International’s “Committing to Conversation” initiative to provide safe space for developing diversity within the Folk community, and by frequently serving as a panelist to discuss challenges and solutions for the industry’s stated interest in diversity, equity and inclusion.

Lewis has gone beyond discussion by spearheading the “Country Soul Phone Book,” a directory (currently in beta) built in response to media outlets who reached out and asked for a central location to find BIPOC, LGBTQIA+, and disabled artists who are typically underserved in Folk, Americana, Country, and adjacent genres. Lewis is also co-producing an inaugural “Black Opry Fest” that centers the contributions and artistry of African American artists in these genres, as part of an ongoing effort to develop a sustainable ecosystem for artists who often feel isolated and marginalized. The virtual festival and conference is scheduled to occur October 27 to 31.

When Lewis was featured in the Americana Music Association’s virtual “Black Equity in Americana: A Conversation” live-stream, she stated: “Black artists and black art have been at the heart of Americana since its inception, and now we’re in a position to address what this means from a relatively new point of view. It’s as if we’re being invited to celebrate the reality of the genre and its participants in a more overt and direct way.”

Her new 2021 album Americana does just that.