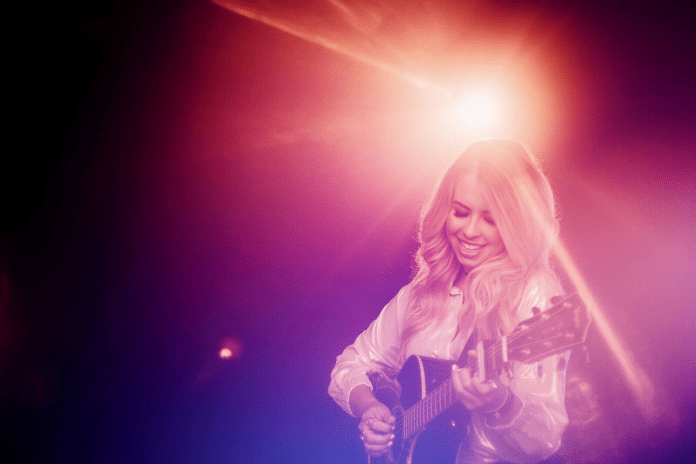 Known for maintaining a busy touring schedule (boasting 250 performances per year), Ashley showcases her virtuosity on this recording, at times sounding like percussionist, guitarist, and vocalist all in one. Her tightly rhythmic guitar playing channels the iconic groove performed on the original recording by John McVie and Mick Fleetwood, creating a foundation for her lead vocal to comfortably fit in. Performed in a key that hits the sweet spot of Ashley’s range, she sings as if she herself wrote the song, bringing an air of power and conviction to her performance. Making it, even more, her own, a hint of breathiness and country twang in her vocal timbre modernizes the flavor of the song.

Logan Ashley has been playing guitar and piano from memory since she was only 8 years old. She started busking at the young age of 10, playing guitar and singing for crowds at the famous Market Square in Knoxville. It is this experience that made her fall in love with the art of performance. She realized then she had the incredible ability to connect with an audience of all ages. “I played for older people who loved classic country, I played for younger kids who loved Taylor Swift, and I played for the crowd in between who loved James Taylor, Fleetwood Mac, and Chicago. I was connecting with a 7-year-old and someone who was 70 – and everyone in between,” says Logan about the experience.

Logan Ashley has dubbed her sound “Southern Blue-Eyed Soul” due largely to the influential female singers she emulated growing up from Dolly Parton and Patsy Cline to Karen Carpenter, Bonnie Raitt, and Stevie Nicks.

Even her nickname is an homage to her musical leanings, LALA. Nothing trite, it is an acronym for Logan Ashley and she has it tattooed on her left arm above her wrist as a reminder of the power of music to move people. Her mission is to influence people to be kind and not be afraid to be their true self – no matter where they start or where that leads

Logan Ashley will be releasing her debut single “God Save The Drama Queen” on 8/31- so keep your ears open!