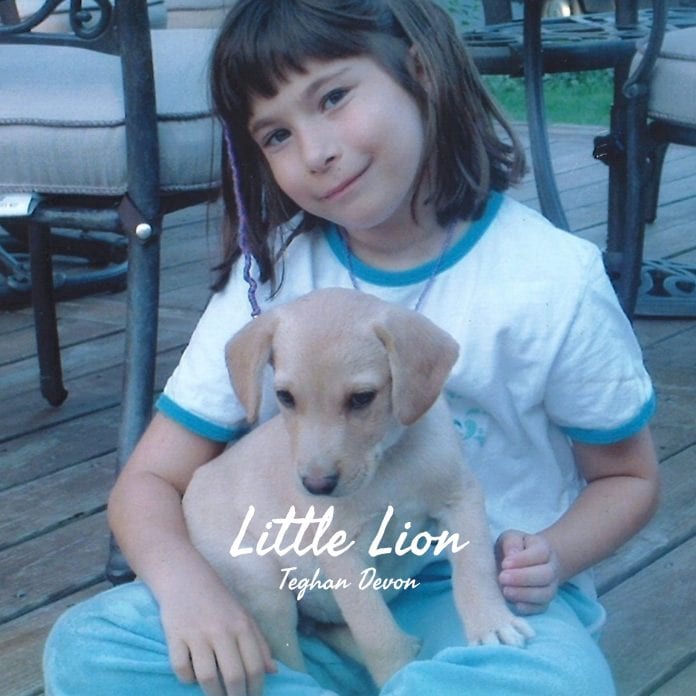 Boston based songwriter, Teghan Devon’s Little Lion is an EP of 4 extremely personal songs written in the thick of grieving the loss of a best friend, a 13-year-old yellow lab, named Sarge.
For those of you who are thinking, “she really wrote an EP about losing her dog?” Yes, she did. In doing so, she tapped into the universal feelings of grief, that come along with losing anyone that we care about.

Devon explains the EP and the decision to write about this subject,

Sarge was more than just a dog. He was larger than life. He fought through laryngeal paralysis, a broken leg, three surgeries, his heart-stopping for 10 to 12 minutes, a traumatic brain injury, and multiple arthritis attacks. He was a miracle and my guardian angel. He was by my side through every hardship, every challenge, always showing me the good in the world and in myself. He was meant to be in my life. Losing Sarge is one of the hardest things I have ever had to go through. A year later I’m still going through it. A part of me will always be going through it. We’ve all lost someone we loved. My someone happened to have paws, and the biggest, purest heart. These 4 songs really show my different stages of grief after he died. Missing him, disbelief that I might never see him again, feeling angry at the world, and again always desperately missing him.

The EP features a sweet and simple acoustic guitar, an aching fiddle, some dreamy synths, a raw electric guitar, and heartbreaking solo piano. I recorded the EP at a studio in a gorgeous old church in West Springfield MA, called Rotary Records. It is honestly the most beautiful studio I’ve ever been in. The EP was produced by Ryan Hommel, mixed and recorded by Andrew Oedel, and mastered by Kevin Butler. Making this EP was a very emotional but incredible experience and I am so thankful to all of the wickedly talented people who helped my vision come to life.

Teghan’s love of the craft that is songwriting began when she was little. She was raised on the ultimate and universal example of great songs: The Beatles (Her parents claim that there is an incriminating video of Teghan belting out “The Ballad of John and Yoko” from her booster seat). She started playing guitar and writing songs naturally followed. The first song she learned to play that really made her fall in love with the instrument was “Blackbird”. After that, she was hooked.

Teghan’s mission is to share her music with the world by writing, recording and releasing her songs, and performing them all over the world. Teghan Devon writes and performs personal and introspective music that touches people’s lives. Her mix of tender yet fiery vocals, pondering and pensive lyrics, and edgy yet intricate guitar parts create a unique experience that will leave you charged and soul-searching.

Teghan is from Maryland but has also lived in California, Texas, Michigan, and Minnesota. She was a student at McNally Smith College of Music in St. Paul before it unexpectedly shut down in December of 2017. Teghan made the best of a bad situation by returning to the twin cities in February of 2018 to record her first full-length album “Fingers Crossed” (released on July 6th, 2018). She is currently based in Boston, Massachusetts, attending Berklee College of Music.

In the summer of 2017, Teghan was selected as a New Folk Finalist to perform at the Kerrville Folk Festival in Texas. 32 finalists are chosen out of over 600 submissions. Teghan is in good company— past finalists include Lyle Lovett, Lucinda Williams, Shawn Colvin, Steve Earle, and Nancy Griffith, to name a few. Teghan was chosen again the next year as a 2018 finalist as well— the youngest contestant both years. Teghan also was a finalist in the 2017 Great American Song Contest and the 2017 Mid-Atlantic Song Contest and was awarded honorable mentions in the 2018 Rocky Mountain Folks Festival Songwriter Showcase, 2017 Telluride Troubadour Contest and the 2016 Mid-Atlantic Song Contest. In the summer of 2016, she performed her original song “No Exception” at the International Summit to End Sexual Violence in New York City.