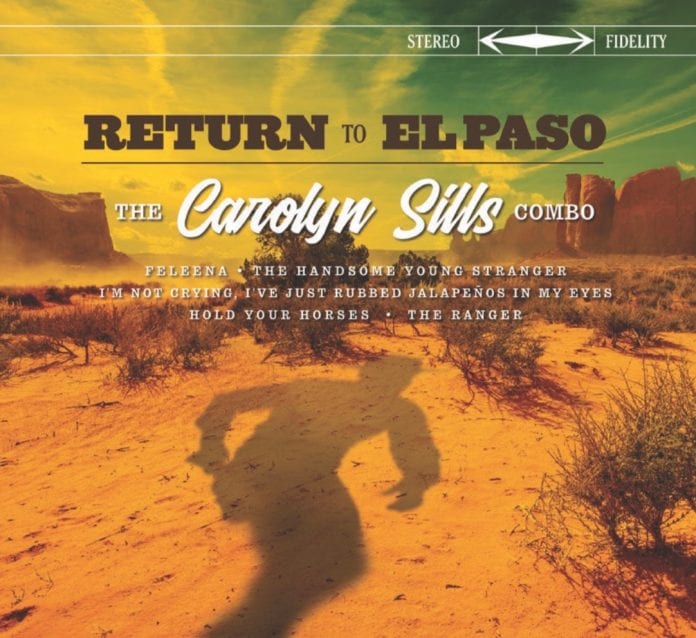 Known for their Patsy Cline-inspired lead vocalist and “Spaghetti Western Swing” style, The Carolyn Sills Combo has come together for a dramatic reimagining of a time-honored country classic: Marty Robbins’ “El Paso.”

In Return to El Paso, slated for release November 1st, The Carolyn Sills Combo creates a vivid backstory for that evening in El Paso, told from the perspective of each of its characters. Fans of Robbins’ epic song will find all of their favorites here – from the heartsick narrator to the unfaithful Feleena and even the fine horse on which the narrator makes his quick getaway into the desert.

The album was recorded in Joshua Tree, California, where renowned producer-engineer Sylvia Massy (Rick Rubin, Johnny Cash, Tom Petty) worked with the group over two days to tell the tale, from perfecting the beautiful Western harmonies to the aching Spanish guitar that evokes the sound that Nashville studio musician Grady Martin laid down for the original “El Paso.”

The record kicks off with “Feleena,” a voyage into the mind of Robbins’ jealous cowboy who begs for his love to refrain from heading to Rosa’s Cantina that fateful night. As the album progresses, the entire story unfolds, from meeting “The Handsome Young Stranger” to the humorously sorrowful “I’m Not Crying, I’ve Just Rubbed Jalapeños in My Eyes.” Our star-crossed narrator chooses his method of escape in the rollicking “Hold Your Horses” before the tale concludes with the “The Ranger.”

The release of Return to El Paso marks the 60th anniversary of the Grammy Award-winning Robbins classic, which appeared on the platinum-selling album Gunfighter Ballads and Trail Songs. In addition to taking listeners on an entrancing journey into the events of “El Paso,” Return to El Paso also features references to Robbins’ 1966 sequel “Feleena (From El Paso)” and his 1976 hit “El Paso City.” In October, The Carolyn Sills Combo will hit the road on a tour in support of the upcoming album.

The Santa Cruz-based band features the captivating vocals of Carolyn Sills, as well as the exceptional musical talent of Gerard Egan (guitar, vocals), Sunshine Jackson (vocals, percussion), Jimmy Norris (drums), and Charlie Joe Wallace (steel guitar). Sills also plays bass in the combo, which has been nominated for five Ameripolitan Awards in the last three years, claiming the 2018 honors for Western Swing Group of the Year.

It’s no mistake that Sills is often compared to Patsy Cline; she credits the country music legend with teaching her how to sing. “I had really good friends back in my early 20s that wanted to learn to play more country music. They invited me over and said, ‘Let’s just hang in the basement and play Patsy Cline songs.’ And who would say no to that?”

With Return to El Paso, Sills continues to pay homage to the country music legends who most inspire her.

Check out the video trailer for Return to El Paso.