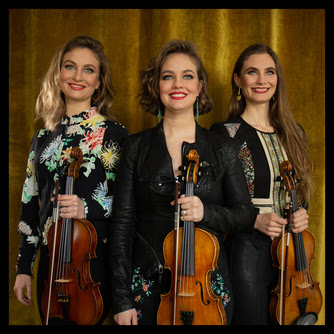 Album synopsis:
“Here we are again, for the first time”: It may be a strange statement from a band that has been delighting audiences with its unique take on Western Swing music for 15 years and counting. However, it was the perfect way for Dallas’ The Quebe Sisters to approach their fourth release, a self-titled album released on September 20.

The five-piece, centered around real-life sisters Grace, Sophia, and Hulda Quebe, is already well-loved for its glowing sibling harmonies and authentic Americana influences, but the group is never afraid of branching out and building on its roots. “This album represents a new phase of our band and the start of a new direction for us,” the sisters explain.

Fans of the Quebes’ previous three albums will doubtlessly appreciate the new directions they chose for this collection. In addition to including original compositions for the very first time–Sophia, Grace, and bass player Daniel Parr put their pens to three of the 10 songs–the trio chose to branch out from its signature triple fiddles and three-part harmony vocals to spotlight individual solos, showing off each member’s strengths.

While taking pioneering steps in that direction, the band worked at the same time to preserve its traditional vibes. In order to create an inviting audio experience, the band recorded together in one room, using vintage gear for a warm and classic sound. They also selected a range of covers perfectly suited to progression — from Jesse Harris’ “Always Seem to Get Things Wrong” to Willie Nelson’s “Summer of Roses.” The overall result is a collection of songs simultaneously strong and wistful; peacefully blending new and old waves.

“Don’t call The Quebe Sisters a throwback band. Sure, while listening to their new self-titled album you’ll feel like you’ve been transported to the old dancehalls of the Texas Hill Country where Bob Wills once commanded a crowd with his fiddle and a “ah-ha!” holler. But the Dallas, Texas-based trio, made up of real-life sisters Hulda, Grace and Sophia Quebe, is every bit as modern as they are steeped in tradition.”–Bobbie Jean Sawyer, Wide Open Country.

“….the sisters’ distinct yet inter-locking vocals add something new to a time-tested offshoot of both hillbilly and high-brow music.”–Bobby Moore, No Depression