September 16, 2021—”Brightest Light,” the new single from primal rock trio The Velveteers, is out today with an accompanying video; listen/watch HERE. The track is off the band’s debut album, Nightmare Daydream, produced by GRAMMY Award-winning artist Dan Auerbach and due October 8 via Easy Eye Sound; pre-order and stream HERE. The band is also set to tour this fall as the sole support for genre-bending rocker Des Rocs; order tickets HERE.

The Velveteers recently opened for Guns N’ Roses at Dick’s Sporting Goods Park in Commerce City, CO. Westword, whose cover story on the band is out now, praised the performance, writing: “Audience members around me were mesmerized as Fig and Pottersmith smashed their drums in sync and Demitro sang with unparalleled intensity” and further calling Nightmare Daydream “heavy, raw and filled with the spit-and-fire passion that makes the Velveteers stand out among competitors, a reminder that rock, as a genre, is far from dead.”

“‘Brightest Light’ is about navigating the ups and downs of life and trying to remember everything will be alright, even in some of the darkest times,” says lead singer/guitarist Demi Demitro. Drummer Baby Pottersmith adds: “Demi showed me her demo the day after she wrote it while we were driving to band rehearsal. It was raining and we were really stressed out because we were supposed to go to Nashville to record the album in the next couple weeks. Listening to that demo, it felt so magical and larger than life and made me realize everything was going to be okay.”

The track follows “Motel #27,” which Under the Radar called “fresh, nasty, and primal” and the album’s lead single “Charmer And The Snake.” 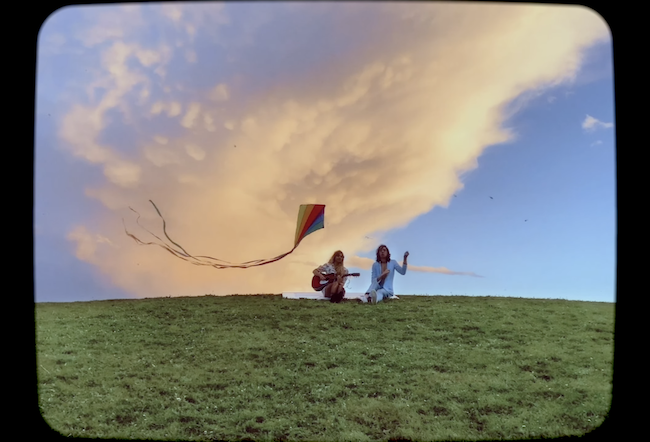 Growing up in Boulder, CO, Demitro rebelled through her guitar, practicing up to nine hours a day and neglecting schoolwork to develop a playing style that is heavy but agile, theatrical but nuanced, grounded in rock history but wholly idiosyncratic. With drummers Baby Pottersmith and Jonny Fig playing on a conjoined set, the band developed a reputation for their riotous performances. Clips of the band’s live shows and DIY videos made it back to Auerbach, who invited them to his studio in Nashville to produce Nightmare Daydream. The album finds The Velveteers stripping down rock and roll to its most primal elements—the riff, the rhythm, the snarl—and rebuilding it in their own image.

5. Charmer And The Snake

7. What A Smile Can Hide