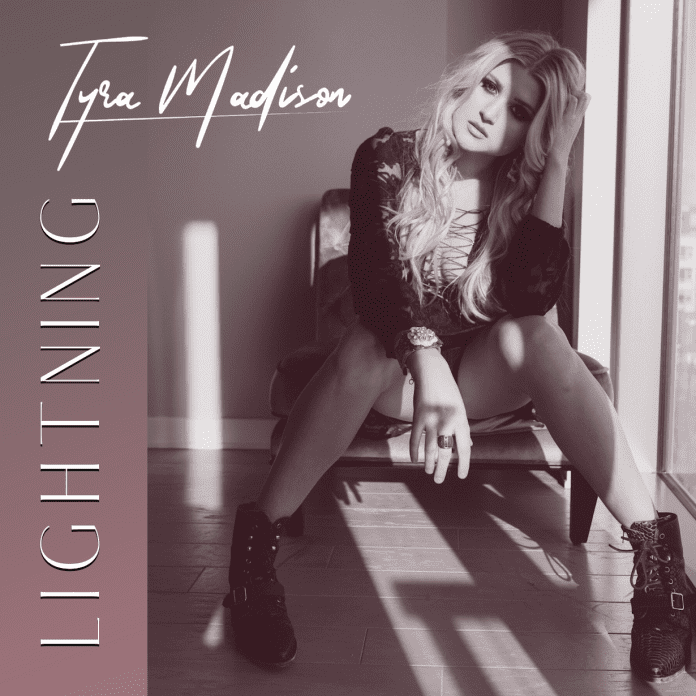 NASHVILLE, TN. (May 29, 2020) – Promising talent, Tyra Madison, is celebrating the release of her latest single, “Lightning,“ available now wherever you consume your music. Produced by industry vets Brad Hill and Lee Holland (Brothers Osborne, Maren Morris, Brett Young), the track was penned by Tyra along with Davey Arnold.

In support of the release, Tyra will be appearing on the nationally syndicated radio show, The Sam Alex Show, which can be heard around the country within the Top 50 DMA’s on Friday, June 5th.

She is also set to perform a live from home acoustic show on The Boot’s social platforms on Monday, June 22nd.

No stranger to the stage, Tyra began her singing career at the tender age of four, where she would attend the local “Pickin’ and Grinnin’ with her papaw. This time spent with bluegrass musicians, including her papaw and uncle, really shaped Tyra’s love for music and the trajectory for her life. It was winning her school talent show in Kindergarten by singing “You are My Sunshine” a cappella that sealed the deal. It was then that she knew exactly what she wanted to be.

Being from a one stop light town, Tyra performed anywhere she could from festivals, schools, sporting events, benefits, etc. It was an opportunity to perform in the prestigious Kentucky Opry Junior Pros that allowed the then teenager to hone her stage presence and mature as a performer. Her first break came when Tyra was noticed by talent scouts and was chosen to be in the cast of Lifetime reality series, “Chasing Nashville.” This opportunity led her to release her first EP Firestarter and land an opening slot for Maddie and Tae.

A recent graduate of Belmont University, Tyra has showcased her powerhouse vocals on the releases of “Saturdays Are For The Girl” and “Right Girl, Wrong Time.” The future proves bright for this promising talent with an infectious personality that effortlessly combines talent with small town charm.