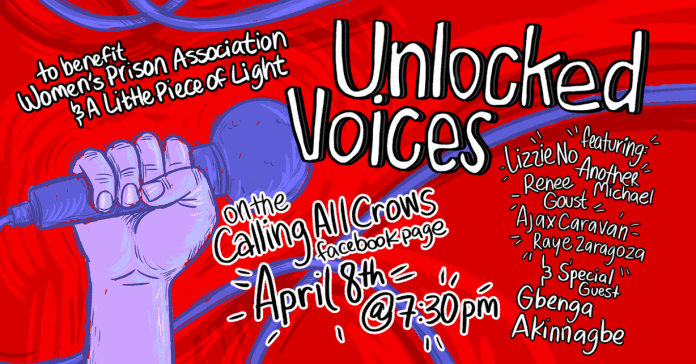 New York, NY (March 25, 2021) – Calling All Crows, with the MultiFaith Initiative to End Mass Incarceration, has announced the 5th Unlocked Voices livestream fundraising event, April 8 in New York City at 8pm EST. The event, hosted by Chadwick Stokes (Dispatch, State Radio) and Lena Charity-Shapira (Calling All Crows), will feature performances by Lizzie No, Another Michael, Renee Goust, Raye Zaragoza, and Ajax Caravan. Plus appearances by Donna Hylton (A Little Piece Of Light), Roslyn Smith (Beyond Incarceration), and actor/activist Gbenga Akinnagbe (‘The Wire/’The Deuce’). Proceeds from the night will benefit the Women’s Prison Association + A Little Piece Of Light.

Unlocked Voices was launched in 2020 by Calling All Crows with the Multifaith Initiative To ENd Mass Incarceration, staging livestream events in Nashville, Boston, Dallas & Charlotte. The events, featuring 21 artists (including Julien Baker, Maddie Medley, Anjimile), a wide array of speakers, and 7 local partners, raised over $25k and captured the stories from people directly affected by the mass incarceration problem here in the United States.

Rev. John Vaughn, Executive Pastor of the historic Ebenezer Baptist Church in Atlanta, noted, “Mass incarceration is one of the major human rights issues of our generation. The partnership between Calling All Crows and the Multifaith Initiative to End Mass Incarceration is an opportunity to leverage the combined power and influence of the music industry and faith communities to catalyze meaningful, systemic change.”

On taking part in the New York Ctiy event, artist Renee Goust stated, “As a feminist, the freedom of all women in public and private spaces is of utmost importance to me. To deprive women of their physical mobility en masse is a great assault on the freedom of all women. That is why I am collaborating with Unlocked Voices in this benefit event. With much love and respect, I’d like to dedicate my performance to all women of color who have been racially profiled into incarceration.”

The Women’s Prison Association is the nation’s first organization for women impacted by incarceration. New York City spends a staggering $1.4 billion per year on corrections. WPA’s alternative to incarceration program, JusticeHome allows women to avoid prison or jail. Instead they address the challenges that led to their arrest in the community. It costs more than $120,000 a year to send a woman to jail and her children to foster care. It costs less than $20,000 a year to offer her an alternative to incarceration with WPA.

A Little Piece of Light seeks to empower and facilitate healing for women, girls, and gender-fluid individuals who are directly impacted by trauma and involvement in the criminal justice system. Led by formerly incarcerated and family members of incarcerated individuals, ALPOL mobilizes those that share their collective trauma incited by sexism, racism, violence, poverty, and the criminal justice system. ALPOL offers safe spaces and delivers appropriately informed, evidence-based programs to individuals seeking to develop their own life skills, healing strategies, and personal agency. ALPOL facilitates an explorative journey in which participants overcome their lived experience of successive trauma and its cumulative, debilitating effects.ALPOL empowers its base to end the cycle of systemic trauma the criminal justice system perpetuates.

Discussing the Women Prison Associations’s involvement with Unlocked Voices, Directed of Donor Engagement, Rebecca Pak stated, “The WPA is thankful to Unlocked Voices for sharing our vision of a society where our reliance on incarceration has been replaced by constructive, community-driven responses. This partnership exemplifies how, when we use our collective voice and experience to drive change, we can positively impact families, communities, and society. Thank you Unlocked Voices for empowering women to redefine their lives in the face of injustice and incarceration. Together, we will forge pathways toward freedom, safety, and independence.”

Donna Hylton, Founder of A Little Piece of Light, and a speaker at the event added, “The Unlocked Voices campaign with the MultiFaith Initiative to End Mass Incarceration inspires us all to find our voice and be agents of change. It takes strength to stand up against injustice and to speak truth to power, but if we can begin to change minds we can also begin to change lives. For too long, the reasons why women and girls have been incarcerated have been overlooked, and the results are devastating. The majority have suffered from trauma and abuse. By sharing our stories we become part of the dialogue and can help find solutions to a problem that impacts families, communities and society: the alarming number of women in prison.”

Along with these live events, Unlocked Voices looks to amplify the stories of people, especially womxn, impacted by incarceration, while acting in partnership with existing movement leaders and community organizations. Through the 8-part concert series Unlocked Voices looks to educate and grow new supporters, to drive action and celebrate the movement.