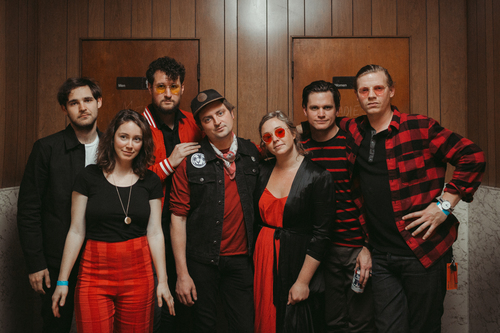 January 18, 2019: Wild Child’s performance on the 44th season of Austin City Limits will air this Saturday, January 19 on PBS. The Austin natives bring a hometown energy to the ACL stage in an episode which also includes a performance from The Arctic Monkeys. “Every season we include at least a couple of bands that represent the best of Austin, and Wild Child captures the spirit of Austin indie music better than any other,” says ACL executive producer Terry Lickona. The band performs songs from their best selling new album Expectations (Dualtone Records).

Watch “Back and Forth” from the show via YouTube:

Wild Child are currently in the midst of a headline tour that will make upcoming stops in Los Angeles, Portland, Seattle, San Francisco and more. Find a full list of tour dates below and on their website.

For the recording of Expectations, the band traveled across the world to work with multiple producers (and accomplished musicians in their own right) on the album, including Chris Walla (formerly Death Cab For Cutie), Chris Boosahda (Shakey Graves), Scott McMicken (Dr. Dog), Max Frost and Adrian Quesada (Brownout, Black Pumas). The album has been warmly received by fans, and been embraced byBillboard, Consequence of Sound, Paste Magazine, and The Austin Chronicle, who said, “Without sacrificing Wild Child’s signature pop swell, Expectations emerges soulful and serious. The band’s best selling record to date has also led to 1.5 million monthly listeners on Spotify, and over 112 Million aggregate streams and counting on the service for their entire catalog.

The album has been embraced by Billboard, Consequence of Sound, Paste Magazine, and The Austin Chronicle, who said, “Without sacrificing Wild Child’s signature pop swell, Expectations emerges soulful and serious.”