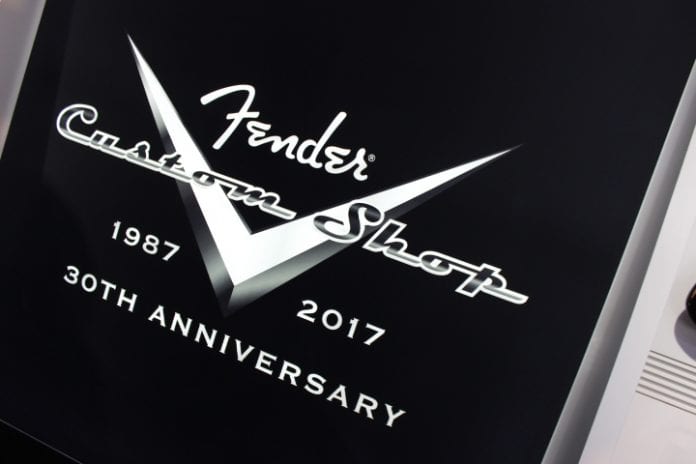 Fender celebrated its 30th Anniversary of its Fender Custom Shop at the 2017 Winter NAMM Show with an evening with the master builders that have created the gorgeous instruments for some of the most iconic players in the world.

On display this year were some very beautiful creations by these master designers that we consider “gems.”.The Fender Custom Shop has earned a reputation for creating the world’s finest custom guitars for both players and collectors, as the epicenter of creativity and quality craftsmanship in the music industry.

Among some of the “gems” showcased at NAMM: 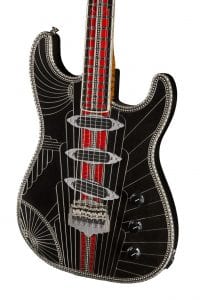 Yuriy Shishkov’s Studioliner Masterpiece – valued at $450,000.00 (pictured above): You may remember Yuriy Shishkov’s latest “Studioliner” Masterpiece featured at the Custom Shop party and the Fender NAMM Booth. Valued at approximately $450,000.00, this guitar is unlike any other. Inspired by and sold with a Kodak Bantam Special Art Deco photo camera produced in 1936, the “Studioliner” exemplifies a Custom Shop guitar; it is a true masterpiece that tells a story through both history and song. A whopping 1,000 precious diamonds trace the body of the guitar and travel up the neck, highlighting the remarkable shape and playability of the guitar. Silver work and Guilloche Enamel inlays add incredible design and dimension to the guitar, ensuring a stand-out performance and presence. Every aspect of the guitar has been customized, including custom designed and made hardware, Exhibition Grade wood and custom electronics. More information on the Studioliner from Yuri himself can be found in this video. 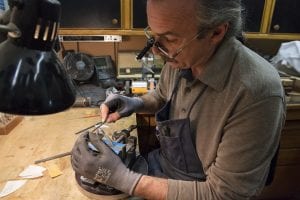 Old Ironsides Amplifiers – $10,000.00 (Champ) & $20,000.00 (Pro): You may have seen Fender Custom Shop Master Builder Shawn Greene’s Old Ironsides custom amplifiers at Winter NAMM last week. Starting out its 30th Anniversary year strong, the Fender Custom Shop is also unveiling its 26-watt Old Ironsides Pro and 5-watt Old Ironsides Champ® amplifiers. The pair of imaginatively designed amps are made of centuries-old wood left over from building the historically renowned U.S.S. Constitution. Both amplifiers also include several notable nautical touches, like the dock-cleat handles, nautical knotted handles (Champ only) and brass features, and truly share a build, sound and look as strong and elegant as the historic vessel they’re named for. Only one unit of each Masterbuilt amplifier was made available for sale to dealers at the NAMM show January 2017. 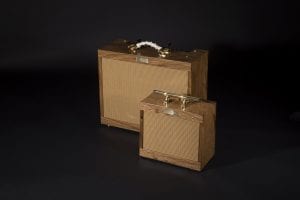 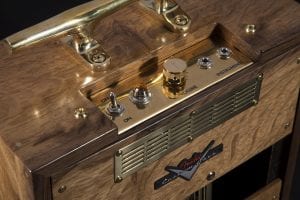 “Ha Penny Bridge” Master Built Guitars – $7,950 (IRISH ROOTS TELE® RELIC) – $8,000 (IRISH ROOTS STRAT® RELIC): John Cruz’s “Ha Penny Bridge” Master Built Guitars tell a historic tale. The guitars’ namesake, the Ha’penny Bridge, happens to be the most famous bridge in Dublin. Since its opening in 1816, the bridge was the only pedestrian bridge to span the Liffey River until the opening of the Millennium Bridge in 1999. When pedestrians crossed, the toll was a single ha’penny, which is short for half penny. Among those pedestrians were U2 – who were photographed on the bridge in their late 20s. The bridge was refurbished in 2001 by Harland and Woolf (the company responsible for the Titantic), and the timbers were replaced with a steel deck. Using that exact wood, John Cruz created his masterpieces. Each guitar has two inlayed ha’pennies, ranging from 1915 – 1917 to commemorate the 100th Anniversary of the Bridge in 2016. Two Ha’Penny Guitars were made available for sale to dealers at the NAMM show in January 2017. 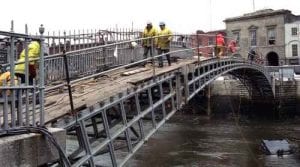 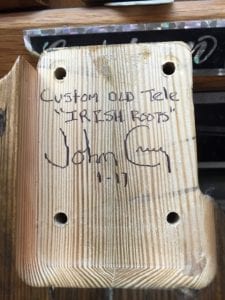 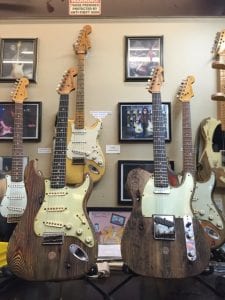 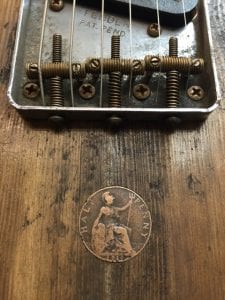 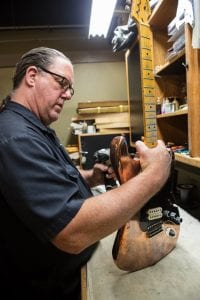 Limited Edition Robbie Robertson Last Waltz Stratocaster® – $14,500.00: Honoring influential guitarist Robbie Robertson of The Band, Fender Custom Shop’s Last Waltz Stratocaster is an exact replica of the bronzed Stratocaster he used during the historic ‘The Last Waltz’ concert. Master Builder Todd Krause replicated this classic instrument as closely as possible to the state it was in when Martin Scorsese filmed the concert. From the pickup configuration, NOS tone capacitors and knobs with the same tension as the original, to the airbrushed headplug and “wear beneath the wear” on the neck, every element was reproduced as meticulously and accurately as possible. With only 40 produced, the Last Waltz Stratocaster provides a rare, unique glimpse into the history of guitar modifications, specifically ones commonly performed in the ‘70s. Over the course of its life, Robertson modified his guitar to reflect his playing style and personal tastes. The most obvious modification is the instrument’s bronze coating, which was applied “Old World-style.”