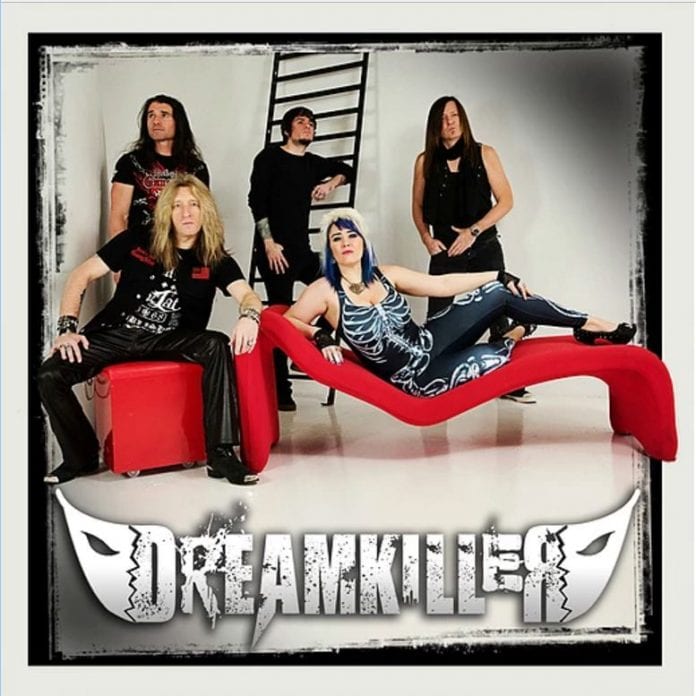 The world of Rock is a tough environment.  Whether you are fighting your way through an over saturated genre, creative oppression, elitism, financial struggles, or straight up sexism; this thing called Rock is far from easy.  I mean if you make this your career choice, you are considered by some to be either extremely brave or downright touched in the head!  This one profession is known for crushing dreams hard.  Well I had the chance to get associated with one band that is staring all these risks and stigmas squarely in the face with unrelenting defiance…

The band Dreamkiller is a bit of an oddity in the current world of rock music.  Its members are not trying to isolate themselves into a sub-genre segment, but rather breaking them down into minute little bits.  They seem to have taken the best in rock music’s past and present, and used those nods to create a sound that is familiar but hardly repetitive.  This band has wholeheartedly embraced their influences!

I had the chance to sit down with Dreamkiller’s guitarist Scott LaFlamme, vocalist Christy Johnson, and drummer Derrick Pontier at this year’s NAMM Show to discuss a few things like new music, influences in sound, upcoming plans, and being female fronted without falling prey to sexual objectification…

SS– So tell me about this new music you’re doing.

SL– Ahh basically it comes down to the four members, five members now…our other guitar player is based out of Memphis, TN, Chaise (Chaise Elliott)… Hey Chaise!  Anyway, we basically, now we’re a theatrical rock band but at the same time you know we’re kinda more of a modern edge.  It’s sort of if you took Lzzy Hale vocal wise, Joan Jett, Pat Benatar vocal wise, music wise Iron Maiden, Queensryche, Ozzy Osbourne, Eagles, Boston, and Journey and threw it into a blender.

SL– That’s correct!  (Laughter) That’s correct.  And the reason being is, I mean quite frankly there is no band that is out there today that sounds like Dreamkiller.  Dreamkiller is completely original.

SS– Looking at what we all grew up with music and what we thought was Rock-n-Roll, is this what you thought it was gonna be?

CJ– Absolutely!  For us, I mean we always kind of had a vision of what we wanted, and of course that has evolved throughout the years.  I like having people in my band that are also influenced by many different styles of music, many different bands.  Myself, I have like a huge musical theater background so I’m into like everything you know, from Idina Menzel to metal.  So, our music definitely reflects that.

SS– A lot of people get into the industry now and they’re like, “This is not what I thought it was gonna be.”  It’s not sex, drugs, and rock-n-roll.  This is not 1986, it’s not hookers and blow, (laughter all) it’s not a private jet; it’s not a tour bus.  It’s a shit ton of business.

SS– So when you think about doing this stuff now, was that something that crossed your mind?  Like, I should have had a real day job maybe…?

SL– Honestly, I mean I think everyone that is in the music industry… you know that, wants to make a living at it; they know there is good parts and bad parts with any job.

SS– It’s kind of a given if you’re getting involved.  I mean we are here; we’re at NAMM a convention that is supporting the music lifestyle for the most part…?

SS– If you’re coming here and you’re actually thinking you’re gonna have a real sound career choice, then this might not be it…?

CJ– It’s important you keep your feet on the ground, be realistic about things.  At the same time, you got to shoot for the stars and you have to believe you’re gonna be the biggest, the best.

SS– So let’s talk about women in music, female fronted bands.  Do you think there is more pressure on you… being female (Christy)?

CJ– I mean maybe a little, Ahh ‘cause there is a lot more competition.  Ahh it’s…there are less female artists…

CJ– Yes, it’s great to have Evanescence, Lzzy Hale.  We got Paramore but me, I’m heavily influenced by all the 80’s rockers that kind of paved the way for us and even further back with Janis Joplin you know.  I love all those artists and I’m so grateful they were able to be around.

SS– It really kind of seems like that the industry says if you’re gonna be female fronted, you have to be sexified.  You have to make it about your image, your look, how much you can entice people in the crowd.

CJ– Well and it’s gonna be an important part of this business with male or female… umm…and you know I can’t really control if someone is gonna like objectify me.  It’s kinda like part of it and life in general.

SS– It’s kind of a battle out there where you might think you’re going to put this kind of skirt on or you go out there in a flannel and make them respect your artistry; regardless of what your gender is.

CJ– You know what, this is Rock-n-Roll and I’m gonna wear what I want to wear you know…(laughter) to a certain degree you know.  It’s ok to be sexual, it’s ok to embrace your body and to love your body.

SS– David Bowie did it.

SS– So when you look at getting involved in something like this and trying to be a band out of all these influences; what would be your advice trying to get into this business for a young lady?

CJ– Hmmm… be very headstrong, know what you want, don’t take any crap from anybody!

SS– So where do we find all your music?

SS– What about touring?

CJ–  We are gonna be heavily touring in 2017, so stayed tuned for that.

Therefore, as you can see from our chat, Dreamkiller is setting out to do something personally original by looking at it all, old and new.  Moreover, as far as I can see, they are doing a damn good job of it, too!  Check out their new track ‘Live For The Dream’ and catch one of their shows near you.  Dreamkiller is a band that is clearly living their dreams regardless of their name and remember, DON’T TAKE ANY CRAP FROM ANYBODY!

DREAMKILLER is made up of:

DREAMKILLER lists home as the following:

For more info on the band and their music, please visit their site HERE.