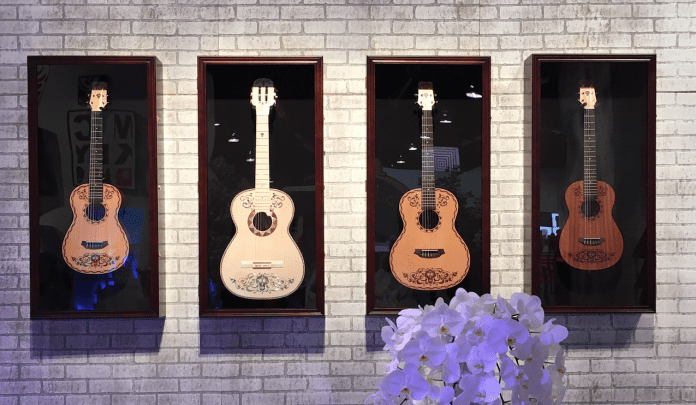 ANAHEIM, CA – Córdoba revealed an exciting new guitar product line made in collaboration with Disney•Pixar for their November 2017 release, Coco. During a presentation called “Bringing the Music of Coco to Life” on Sunday, July 16 at the bi-annual D23 Expo, Córdoba CEO Tim Miklaucic was interviewed about this inspiring collaboration and explained the the behind-the-scenes process of bringing an animated guitar to life and the impact Coco had on the Córdoba team. On first hearing about the project, Tim recalled thinking, “This is going to be one of the best things that ever happened to the nylon string guitar.”

The complete Coco x Córdoba collection includes two miniature nylon string guitars (spruce/mahogany and all-mahogany) in a colorful POP package, a 7/8 size nylon string guitar, and a high-end guitar Replica from the film, all ranging in price points. The collection is tied together by a beautifully intricate design that was inspired by the guitars and traditions of Mexico featured throughout the film. The products were on display and seen for the first time by the public at D23 Expo 2017.

The Coco x Cordoba line will be available in the U.S. beginning October 2017 and the film opens in theaters in the U.S. on November 22, 2017.

Despite his family’s baffling generations-old ban on music, Miguel dreams of becoming an accomplished musician like his idol, Ernesto de la Cruz. Desperate to prove his talent, Miguel finds himself magically transported to the stunning and colorful Land of the Dead following a mysterious chain of events. Along the way, he meets charming trickster Hector and together, they set off on an extraordinary journey to unlock the real story behind Miguel’s family history. Disney•Pixar’s “Coco” opens in U.S. theaters on Nov. 22, 2017.

Founded in 1997, Córdoba seeks to guide the evolution of acoustic guitars and ukuleles, blending traditional craftsmanship of the early master luthiers with modern developments. Inspired by the organic beauty and honesty of acoustic instruments, every Córdoba is lightweight, responsive, and a direct descendant of the Spanish tradition. Córdoba continues to challenge the definition of the acoustic guitar without sacrificing the authenticity of its heritage. Learn more at www.cordobaguitars.com.