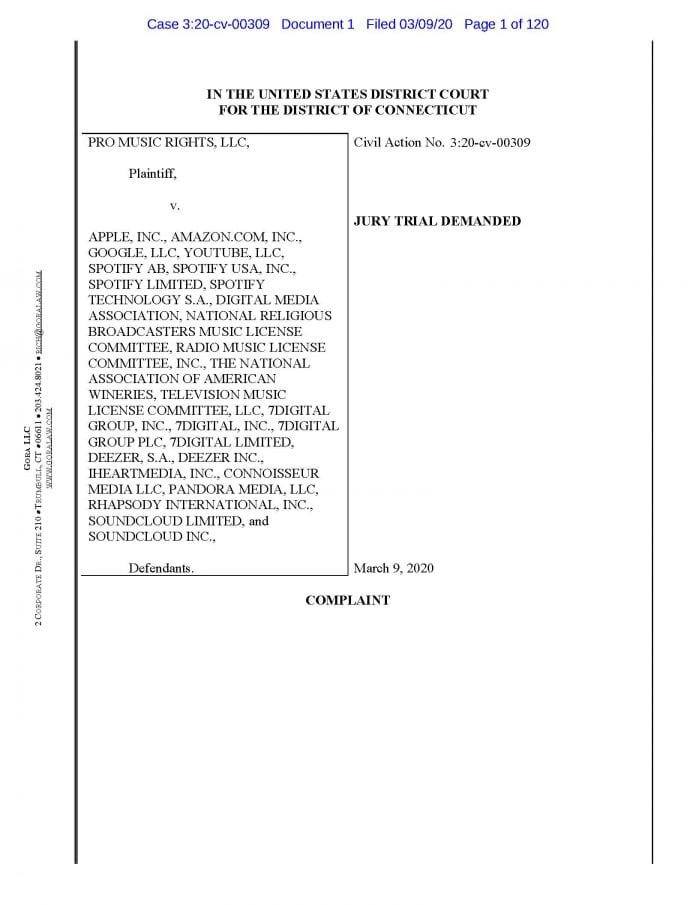 Naples, Florida, March 9, 2020–Today, Pro Music Rights, LLC sued the entire music industry for running an illegal cartel for the performance rights of musical works. “We have to be aggressive against the music industry, just as Global Music Rights is forced to do against the Radio Music License Committee,” said Jake Noch, a pioneering visionary in the performance rights organization (PRO) space.

“They have to explain why they are boycotting Pro Music Rights and fixing prices for performance licenses,” Mr. Noch adds. “We already sued Apple, Amazon, Google, YouTube, Spotify, 7Digital, Deezer, iHeartMedia, Rhapsody and SoundCloud in New York federal court for copyright infringement, and they too have to tell the public why they are refusing to deal with Pro Music Rights.”

“Pro Music Rights has made numerous attempts to offer a license to its repertory. Despite these efforts, the cartel engaged in a group boycott and refused to deal with us,” Jake continues

Noch said of the antitrust lawsuit, “Litigation was not our first choice but something had to be done to stop the buyers from bullying PMR out of the market in flagrant violation of antitrust laws.” He explained, “We kept going back to the buyers to offer them a public performance license. Radio, T.V., music steaming services – they all collectively and uniformly ignored us in a group boycott for the past two years. WineAmerica even refused to accept our mail! We decided that enough was enough when the buyers continued to play our songwriters’ music even after we had placed them on notice of their copyright theft. We had wanted to work things out but their brazenness was a slap in the face. We realized the buyers never intended to do business with PMR, and they have been running a cartel in the industry.”

“They must be stopped, we will stop them,” Noch says.

Noch concluded, “The buyer’s cartel must be disbanded. They have strangled the rights of songwriters for much too long. Not only by not paying songwriters at all, they have reaped the benefit of below-market rates achieved through their monopsony power. There is no such thing as free market competition among buyers in the purchase of public performance licenses and that reality directly harms songwriters, not to mention their fans and fans-to-be.”