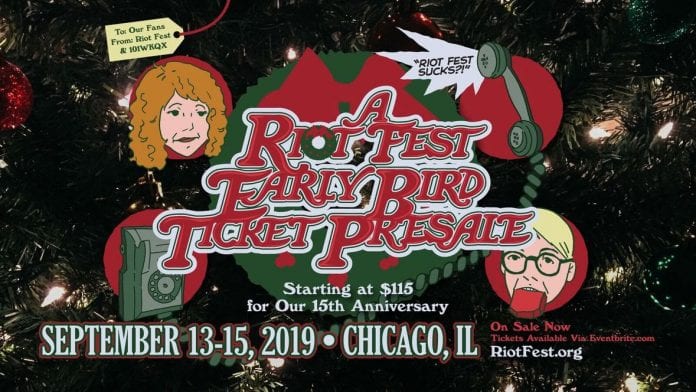 Tickets for the 15th Anniversary of Riot Fest go on sale tomorrow (Thursday, December 6) at 9 a.m. CST via Eventbrite.com via https://riotfest2019.eventbrite.com. In keeping with Riot Fest’s holiday tradition, here’s the 2018 video!

Although Riot Fest organizers are being tight-lipped about the plans revolving around the 15th Anniversary, founder Michael Petryshyn (“Riot Mike”) had this to say:

“If someone would have asked me during the thralls of the very first Riot Fest if it would be around some 15 years later, I would have surely—with blenched eyes—shook my head. But, somehow, with plenty of ups and downs, we’ve been able to throw this party year after year. And if nothing else, that’s a testament to the fans who support us. They’re by our side….always have been. So, I’m going to make sure that Riot’s 15th Anniversary is going to be special and filled with surprises.”

From its first year onward, the fest has prided itself on bringing together diverse line-ups, unexpected band reunions, and some of the best young bands in punk, rock n’ roll, hip-hop, reggae, metal and more to ever-growing audiences. Iconic bands like the Misfits, The Replacements and Jawbreaker have reunited to rock the festival in past years, cementing the fest’s reputation for dropping jaws with its lineup announcements.

Riot Fest is also known for its carnival rides, sideshow performers, amazing food and beverage options, and year-round concerts across Chicago. And, it is still 100% independently owned.

Introducing Surge Powered by Break Out: A Game Changing Solution for Creating Interactive Audiences from Anywhere in The World