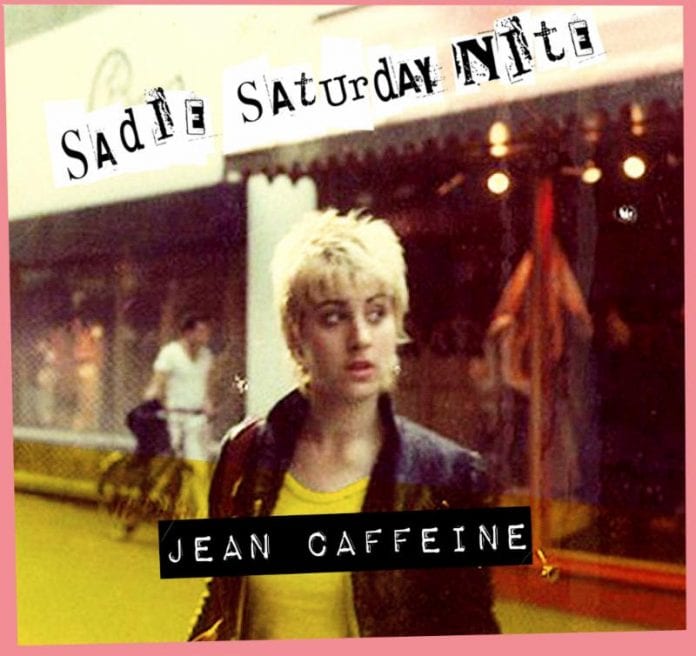 From drumming to all girl bands to honky tonking, singer/songwriter/musician Jean Caffeine has lived nine fascinating lives. Her life adventures vaulted her from drumming for the San Francisco all girl punk band The Urge, to New York in the 80’s, where she was recruited by founder Ann Magnuson to drum for Pulsallama, forming Clambake with Holly George Warren and two former Austin punkettes, to moving to Austin, where she currently resides, where she fronted her y’allternative country band, Jean Caffeine’s All Nite Truckstop. Now, to celebrate her early punk roots and the 40th anniversary of the California punk rock scene, Jean, described as a “cross between Brenda Lee and Patti Smith” by the “Austin American Statesman”, is proud to announce the release of “Sadie Saturday Nite”, a concept album on vinyl about Jean’s coming of age in the San Francisco punk scene, tomorrow, 9/1 on Joe Records. This is her first record since 2011’s “Geckos in the Elevator”.Jean got hooked on rock n’roll memoir writing when she took workshops with Pamela DesBarre, the author of “I’m With the Band”. At a certain point she lasered in on her punk past. Once the project was further along, she attended some workshops with local Austin author Spike Gillespie. Jean says, “The decision to focus on the punk part of the memoir that turned into ‘Sadie’ was kind of random. For a long time I didn’t want to think about my punk past. It seemed dark and I couldn’t remember a lot of it. I was really young, and really impulsive. I thought the memories had been erased, blacked out, but once I started writing, so much came back. It felt like I was watching a movie of my former life. The show started to chronicle a journey I don’t think I realized I had.”

The “Austin Chronicle’s” Greg Beets reviewed “Sadie Saturday Nite” and said, “Caffeine’s folk-infused storytelling captures both the heady and foreboding elements of Bay Area youthdom in the Summer of Hate.” The album was originally created as a one woman, one guitar player show, which she performed at the Hamilton Fringe Fest, Buffalo Infringement, the Hyde Park Theatre, and a City of Austin Arts Cultural Arts Division sponsored project at the Hole-in-the-Wall. “SadieSaturday Nite” morphed into an album, which features Austin-based musician Josh Robins from the Invincible Czars. “Josh is a creative genius!”, Jean says. “He workshopped the show with me, co-wrote several songs, added wonderful guitar parts to songs, and basically gave me great input along the way.” Other musical guest stars include Thor Harris of Swans and Thor and friends.

Highlights of the album include the first single and video, “All Girl Band”, which chronicles Jean’s tenure in three all female bands, including Pulsallama. “Each verse of the three verses is a shout-out to each of the all girl bands I was in.” She continues, “When my punk band The Urge played The Hong Kong Cafe in Hollywood, we were told by the owner that we were the worst band she’d ever heard and that Bill Murray had just walked out. If people aren’t gonna like you, you might as well go big!”

“Sadie Saturday Nite” also includes “Wimp”, a cover song by the California Mexican American punk band The Zeros, featuring Javier Escovedo. “It’s been a favorite of mine since back in the day. The Zeros actually shared the bill with us at that ill-fated Hong Kong Cafe show in Hollywood!”

Other album tracks “Finnella’s Finish Baths” and “Winterland (Talking Blues)” were initially tracked and produced in San Francisco with acclaimed singer-songwriter/guitarist/producer Chuck Prophet. “They were on my last album as songs, this time I am repurposing them with spoken word elements. I always was a huge Patti Smith fan so some of her spoken word sensibility probably filtered down into me.”

A new version of the song “It’s Not Nice Without You”, which was originally on Jean’s second solo disc released in 2000, “Idee Fixe”, was re-recorded. “There is a real tender part of my one woman show where I do some of this song so I thought I’d re-record it. The guitar player who plays on it is Mike Trebilcock, who’s not well known in the States, but in the 90’s his band the Killjoys won a Juno in Canada and got a lot of video airplay. Mike and I played a ton of folky/punky/rootsy shows when I lived in Canada and I still return and play with him. Mike was always interested in my stories and his encouragement was integral to me working up the show. Mike also plays and sings on “Winter of Hate”, a song about the disillusionment of seeing the Sex Pistols swan song at Winterland.” Jean is currently working on a video for the track which will be available in mid-to-late September.

From The Urge to Pulsallama to Clambake (whose unreleased EP was mixed by Alex Chilton), after years behind the drums, Jean released her debut solo album, “Knocked Down 7 Times Got Up 8” in 1998. She then fronted Jean Caffeine’s All Nite Truckstop and played “electrified porch music and garage country” for six years in Austin’s honkytonks, beer joints, back porches and alternative lounges. The band’s self-titled debut CD was released in 2001 on the Blue Million Miles label in Germany

Jean released her second solo album, “Idee Fixe”, in 2007, and “Geckos in the Elevator” in 2011, both to an enthusiastic response. In addition to music, she is also a visual artist doing printmaking and collage. She collaged the inner sleeves of the new album in the style of the New Deseases, the zine she produced in the late 70s. She did some animation work on director Richard Linklater’s film “Walking Life”, and also made a cameo in the movie “Slacker” as “Roadkill”.