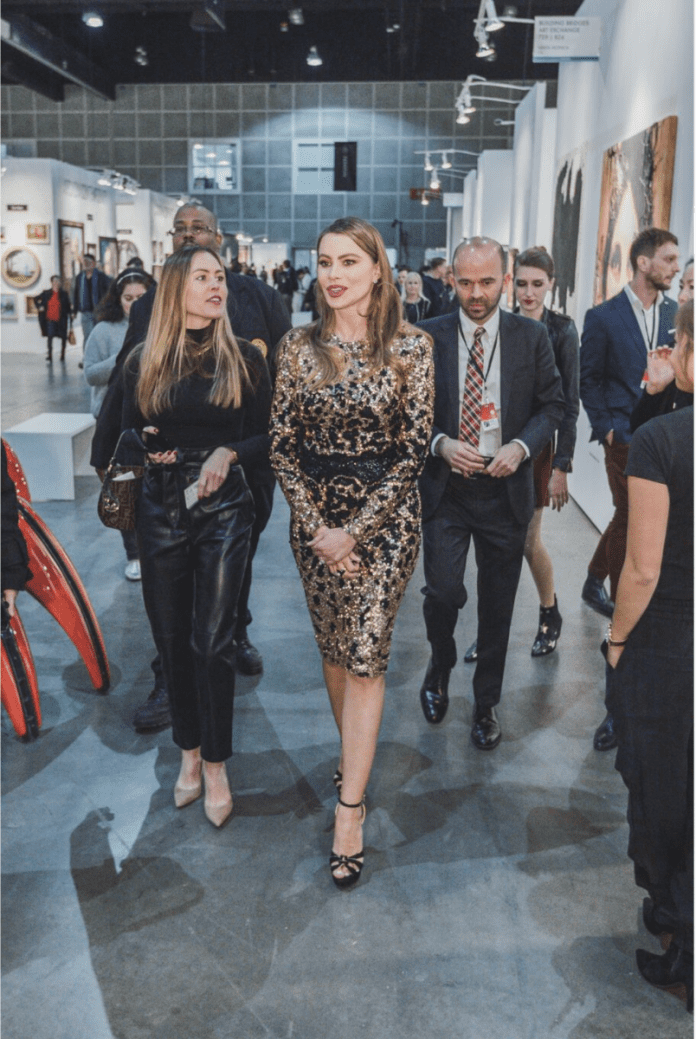 On Wednesday, February 5, 2020, Hollywood, fashion, and artworld stars alike gathered at the Los Angeles Convention Center for the Opening Night Party of the 25th annual LA Art Show, kicking off the largest year of art and cultural programming in our city’s history. A portion of proceeds from ticket sales went to benefit the lifesaving mission of St. Jude Children’s Research Hospital.

The VIP attendees were treated to a sneak peak of this year’s programming, which features over 130 galleries, museums and cultural institutions from 23 countries. Highlights include Walker Fine Art’s MC Escher Experience, featuring his complete series of his iconic self portraits, which have never been exhibited together before. Walker Fine Arts possesses the world’s largest collection of Escher’s work, and many of the pieces included in the LA Art Show have never been shown in California. The showcase also features an interactive photo-booth where patrons can insert themselves into Escher’s iconic sphere self portrait. Kazu Hiro’s ICONOCLASTS exhibition, featuring photo realistic, larger than life sculptures of the heads of Abraham Lincoln, Salvador Dali, Frida Kahlo, and Jimi Hendrix drew admirers before they even entered the art fair. Kazu is nominated for an Oscar for his special effects makeup in “Bombshell,” starring Charlize Theron, Nicole Kidman, Margot Robbie and John Lithgow. With the Oscars taking place this same weekend, the LA Art Show also launched the FASHION section this year, featuring a retrospective of Sue Wong and her legendary gowns, many of which have been worn on the red carpet for the Academy Awards and Golden Globes.

The programming in this year’s DIVERSEartLA drew a crowd with the spectacle of the floor-to-ceiling MOLAA Pride Flag created by artists Leo Chiachio and Daniel Giannone. Next to this was Viktor Freso’s “The Birth of the Niemand,” featuring 16 larger than life statues that patrons could walk amongst and pose for photos with. The Japanese American National Museum booth drew patrons in with Taiji Terasaki’s “TRANSCENDIENTS: Heroes at Borders” exhibition, an immersive meditation on the atrocities of the Japanese-American concentration camps during World War II, and a celebration of the heroes who fight for equality and democracy for other marginalized communities to this day.

Attendees were wowed by the breadth of art featured in the new European Pavilion section of programming, featuring over a dozen galleries from Spain, Italy, the UK and beyond, in celebration of the profound influence that European art has had on the world.

Throughout the evening, attendees were entertained by roaming performers from Cirque du Soleil’s Volta, There Could Be a Monster Inside You performance by Spain’s PSJM Collective (part of this year’s DIVERSEartLA programming), live sculpting by Ichitaka Kamiji, presented by Zeal House, and live ink painting by Japanese calligrapher Sogen Chiba, presented by Gallery Kitai. Renown muralist Robert Vargas completed a new mural honoring the late Kobe Bryant.

For six years in a row, the Opening Night Premiere Party has served as a benefit for St. Jude Children’s Research Hospital. Thanks to generous donors, families never receive a bill from St. Jude for treatment, travel, housing or food – because all a family should worry about is helping their children live. All attendees of the Opening Night Premiere party are supporting the lifesaving mission of St. Jude: Finding cures. Saving children.®

The first day of the LA Art Show opens to the public at 11am on Thursday, February 6, with a busy schedule of panel discussions at the Dialogs LA booth, performances, and more. Learn more about each day’s programming at https://www.laartshow.com/daily-programming/.