Home News The History and Resurgence of Tenor Guitars 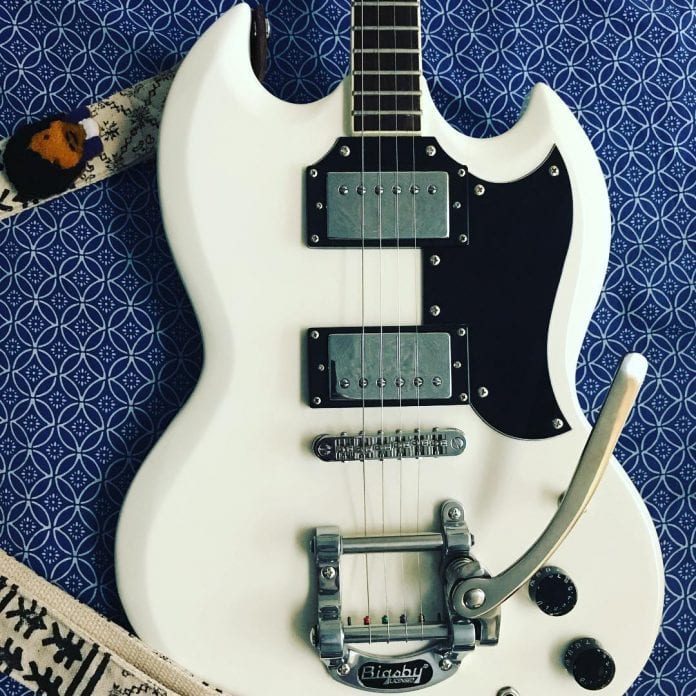 These four-stringed instruments may look like short-scale basses at a quick glance, but they’re not low-end machines at all. They’re called tenors, and they have as much in common with banjos as they do guitars.

In the early 1920s, jazz was quickly becoming one of the more popular forms of music in the United States. Tenor banjos were common in a lot of early jazz, but guitars were gaining popularity in the genre, so tenor banjo players were in the market to make an easy transition to this other fretted instrument.

Guitar builders like Martin had a solution — the tenor guitar.

Tenor guitars are built to have a similar nut width and scale to tenor banjos, and they’re made to be tuned the same — in fifths. They enjoyed some popularity early on, but as tenor banjo players moved on to standard six-string guitars, their use became less frequent.

Thanks to the Dixieland jazz and folk revivals in the ‘50s and ‘60s, tenor guitars saw a short mid-century resurgence. The Kingston Trio’s Nick Reynolds was a leading influence of the new popularity of tenor guitars, in particular, the Martin 0-18T flat top acoustic he frequently played.

As the folk revival faded, so did the popularity of the tenor guitar for a second time. Martin Guitar, which had continuously built acoustic tenor guitars since the 1920s, halted regular production in the ‘70s.

Recently, tenor guitars, especially electric models, have become a more frequent sight in independent music. Warren Ellis, who performs with Nick Cave, has a signature model with Eastwood Guitars, which Amanda Shires has been spotted playing.

Back in 2006, Neko Case was featured on the cover of the second issue of The Fretboard Journal with her collection of acoustic and electric tenors.

In her interview with Jason Verlinde, she talks about the difficulty she had finding an electric tenor to push her sound in a live mix. “I realized on tour that I was having a hard time being heard amongst my amplified brethren and I thought I could really use an electric guitar.” She eventually was able to find electric models from Gretsch and Gibson, but there weren’t a lot of modern, affordable options for players.

It’s not that tenor guitars weren’t being made at all. Martin Guitar, which halted regular production of tenor guitars decades ago, never stopped offering tenor guitars through their custom shop. In the past 20 years, Dan Brown has noticed an increase in demand, estimating they’ve built 50 in the past 12 years at Martin through the custom shop. But custom orders from a brand like Martin or any other skilled luthier are often prohibitively expensive.

Recently, brands have been adding tenor guitars to their standard production line. In addition to acoustic makers like Kala (who primarily builds ukuleles, another sister instrument to tenor guitars), affordable electric tenor guitars are being manufactured by brands like Eastwood Guitars, who boasts over a dozen variations of electric tenors, including a baritone and a mandocello.

Eastwood Guitars made their first tenor, a Warren Ellis signature model, back in 2010, and the demand was immediate — and surprising. “I did not have high hopes for its success and I was not a tenor player at the time and did not understand the market, but … the more models we offered, there was more demand for it,” according to president and founder Mike Robinson. “Sales outperformed our expectation ten times over … There was a pent-up demand for these instruments that had not been addressed before at this ‘affordable’ price point.”

It’s difficult to pinpoint the reason for the resurgence of tenor guitars, but their appeal is understandable. They’re unique instruments with numerous benefits that appeal to a wide variety of players, men and women alike. According to Dan Brown from Martin Guitar, “Tenor guitar customers are very loyal,” adding that they’re especially willing to ‘pre-order’ if necessary to get one.

Mike Robinson from Eastwood guitars mirrored that sentiment. Eastwood Guitars frequently offers pre-orders on their guitars, and these pre-orders have driven the production of their tenor line. “We simply propose a design, and we only make them if there’s enough demand. Time and time again, customers have backed all of those projects.

But why do tenor guitars have such a loyal fan base? A big reason is simply that they’re often tuned in fifths and have four strings.

Tenor banjos aren’t as common as they were in the 1920s, but violins, mandolins, cellos, and violas are all tuned in fifths, making it an easy transition for players who are looking for a new sound, but aren’t interested in learning an entire new instrument. Amanda Shires is best known for her violin playing, and she’s been known to play a tenor guitar on stage as well.

Like any stringed instrument, tuning is completely up to the player. They can be tuned in fourths like the top four strings of a guitar, or in an open tuning, like the Open G tuning that’s common for five-string banjos.

They’re also a great fit for many musicians — physically.

Some players with smaller hands (especially women and younger players) or who have had wrist problems occasionally have trouble navigating a standard scale, six-string guitar. Tenors have a much shorter scale, often shorter even than a Fender Mustang or Duo Sonic and have a nut width smaller than a five-string banjo.

That’s what drew Neko Case to the instrument. In a 2006 interview with The Fretboard Journal, she said, “For years before that I had tried to play six-string guitar, but I have really tiny little hands and I could never really get going enough for it to sound like music. It was really hard for me to stretch my fingers like that. I just remember picking [the tenor] up and my hand fitting around the neck so perfectly.”