Home News Guitar: The Instrument That Rocked The World 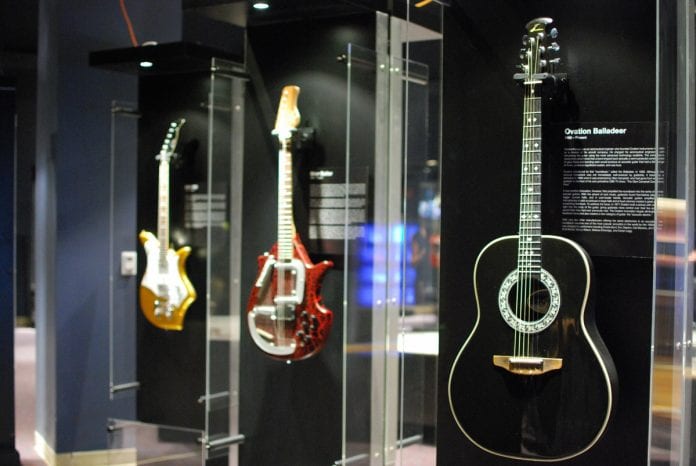 Museums and guitars usually are not words you find in the same sentence! But while in Bozeman, Montana this summer, a special traveling exhibit about the history of the guitar was recommended to me, so I hit the Museum of The Rockies one afternoon for a fantastic tour of the beginnings of the guitar through now!

Walking into the museum, you are first greeted by a giant guitar laying flat across the length of the room, 43.5 feet long, that everyone can actually play; mostly just plucking the strings, but is super fun for all ages! It was fun seeing toddlers crawling on this giant-sized guitar!

With plenty of interactive stations, such as a kind of xylophone with different “keys” made from various kinds of wood that guitars a made of, with mallets you can use to hear the different sounds from each type of wood, to guitars that anyone can just pick up and play, this exhibit is more than just a learning experience. It is so much FUN! Kids of all ages were visiting this exhibit and enjoying being able to pick up a guitar, actually, hold it and make some noise. Along with a nice acoustic guitar, the exhibit also provided an electric guitar with an amp which really attracted so many people! Here are a couple of the young girls who could be our next guitar goddesses! (They are sitting in front of a giant mural of a huge number of famous guitar players that include Bonnie Raitt and Nancy Wilson!)

There were so many interesting, fun, and surprising items there to look at, including an original Martin Parlor Guitar from the 1840s and a Gibson L-1 Flat Top, manufactured since 1926.

Other incredible guitars displayed were B.B. King’s “Lucille” and “The Rock Ock” 8-neck guitar that can actually be played!

Learning the history of the guitar plus getting to look at photos of our guitar heroes and heroines was magical. This monitor had an old video of Chet Atkins doing his famous finger-picking style, and there were other videos in the room showing different guitar players playing their various styles from all genres and eras of music performance.

The display of the luthier’s workbench was fascinating as was an original Silvertone guitar whose case is also the amplifier!

One of the favorite displays though received the most vocal expression from everyone looking at it! It is the famous 1970s to the present day “Air Guitar!” Yes! There it is.

This fabulous fun exhibit will run through September 2018 at the Museum of The Rockies in Bozeman, Montana, then moved to and displayed at the Cincinnati Museum Center in Cincinnati, Ohio mid-September 2018 through January 2019.

You can read more about this exhibit at The National Guitar Museum site –
http://www.nationalguitarmuseum.com