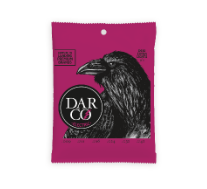 I have the Epiphone Inspired by John Lennon 1965 Casino Outfit that’s been sitting around for a while because I’ve been having some trouble getting a sound from it that I really enjoy. I picked up a pair of the revamped Darco strings at the Martin booth while at Winter NAMM, so I decided to give them a try on the Epiphone. Preferring light strings, I chose the D930 9s which are extra light. After I completed the string job, I sadly put the Epiphone back where I keep it preferring some of the other guitars in my collection, such as my Gretsch and Rickenbacker models.

For this review, I picked up my Epiphone, tuned it up, started playing some of my favorite songs, and WOW! I did not know what I was missing. Sometimes when you put extra lights on a guitar, you get some sloppy bends and maybe even some less-than-solid sounds. I think that’s the reason that many guitar players prefer to go with a heavier gauge like 10s or even 11s. But I can tell you that is not the case with these 9s by Darco. The playability is smooth, and they lend themselves to fast action and awesome bends. The sound is crisp and clean. I don’t usually play at the middle position of my pick-up switch (both pickups), but I think that’s where these strings sound best on my Casino. Luckily, my Casino will be back in the roundup for quite a while with these new strings as I have found the sound I’ve been missing.