Electro-pop singer-songwriter Betty Moon introduces the music video for “Crazy (What You Make Me),” on Guitar Girl Magazine.

The song is the last track on Moon’s latest album, Hellucination, released a few months ago. It seems fitting for the final track on the album to be Moon’s very last release of 2019, prior to the New Year and new music being polished in the studio, even now.

With nine albums and myriad singles notched on her belt, Moon never fails to produce original, infectious music made up of elements of rock, electro-pop, R&B, and soul, all capped by Moon’s sensually alluring voice.

Originally from Toronto, Betty Moon’s stellar career started while she was in high school, when Moon sold more than 10,000 home-produced records. This unprecedented feat caught the attention of the big labels, of which, one, A&M/Universal, offered Moon a recording contract, resulting in the release of her self-titled debut album.

Betty Moon turned out to be more than anyone bargained for. Weathering occasional setbacks and making the most of opportunities, Moon’s musical talent and business sense eventually made her a force to be reckoned with: her talent landed her on this year’s Grammy ballot, while her business ability gave rise to Evolver Music.

Moon’s voice, alluring and rife with voluptuous textures, riffs on how her paramour is driving her over the edge of sanity into the abyss of craziness, as well as vice versa.

The video, directed by Moon, depicts Moon wearing a straight-jacket in an empty room. The back wall of the room rotates through a variety of vibrant murals, providing the visuals with a dazzling kaleidoscopic effect.

“Crazy (What You Make Me)” pulses with retro rock and pop filaments, as the video emphasizes the sleek panache of the song’s dynamics. 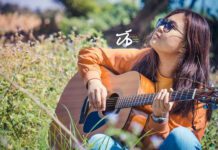 Johanna Dadap Shines on “The World’s Gone Up In Smoke” 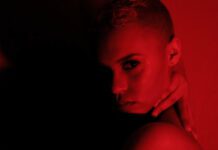 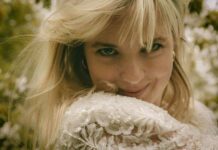