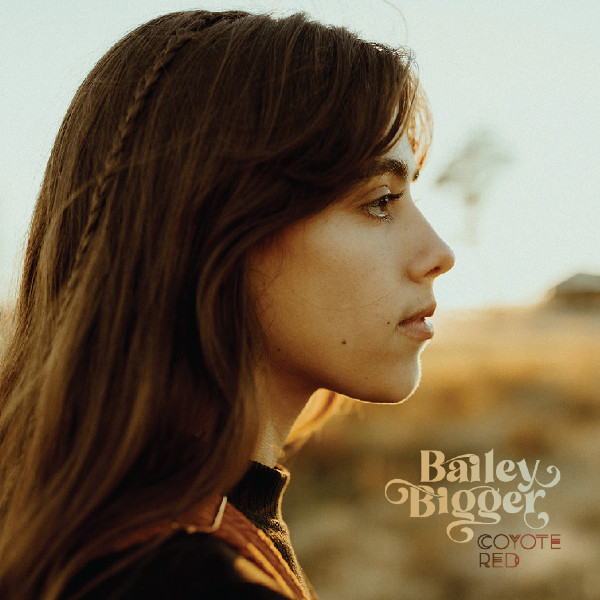 Hailing from Marion, Arkansas, Bailey began playing guitar at age nine, followed by writing songs a week later. By the time she was 14, she was writing and performing seriously. Since then, Bailey’s shared the stage with The Avett Brothers, Sierra Ferrell, and Sturgill Simpson. In 2020, she released her debut EP, Let’s Call It Love.

Remarkably gifted not only as a songwriter but also as a singer, Bailey’s voice has been likened to Buffy Sainte-Marie. In point of fact, her voice is reminiscent of a blending of Judy Collins and Joni Mitchell.

Encompassing 10-tracks, entry points on Coyote Red include “You Somehow,” on which Bailey’s voice conjures up savors of Judy Collins’ “Someday Soon.” Relaxed and indulgent, the melody rides a delicious side-stick snare topped by gleaming guitars, along with a gently sparkling piano.

“Black Eyed Susan,” a light and bouncy tune, features a downhome-flavored melody highlighted by sumptuous coloration. Yet like all the other songs on the album, the icing on the musical cake is the gorgeous voice of Bailey Bigger, silky-smooth and lustrous.

The title track, arguably the best track on a superior album, rolls out on shimmering layers of guitar, giving the tune a soft beauty akin to the Eagles’ “Tequila Sunrise.” A bit constrained, on this track Bailey’s tones enclose traces of feathery crackles, imbuing the lyrics with ozone-like mists.

Oozing with bluesy Americana flavors, “The Levee” delivers a melancholic tale of lost love, riding a measured rhythm hollowed out by a dense, fat bassline. A stunning piano solo injects the harmonics with despondent hues.

The last track, “Mississippi You’re On My Mind,” exudes tangs of gospel, blues, and Americana as Bailey’s exquisite tones infuse the lyrics with deep wistfulness.

Wow! Conveyed on the opulent voice of Bailey Bigger, Coyote Red goes beyond superb and enters the realm of superlative. Coyote Red is a must-listen-to album.