Dorothy Martin, the band name and singer-songwriter of the Los-Angeles based band, Dorothy, have recently finished an eleven-date tour as the opening act for rock band, Greta Van Fleet, along with their sold-out upcoming after party show together at Lollapalooza on Aug. 4. The band will also be opening for Joan Jett on Aug. 8 in Cedar Rapids, IA. Dorothy and the band have been on their Freedom Tour 2018 promoting their sophomore album, 28 Days in the Valley, produced by Linda Perry (4 Non Blondes, Pink, Gwen Stefani).

Their latest album features the lead single, “Flawless,” which is currently climbing the Top 20 charts on Billboard‘s Mainstream Rock Songs. Purchase 28 Days in the Valley here.

While having completed 35+ tour dates thus far, Dorothy will head out to other West Coast cities like Las Vegas, Fresno and Pomona, Calif, and multiple cities in Texas. Dorothy have several festival dates too, including Summerfest, Arroyo Seco Weekend, Lollapalooza and many more. Tickets for their tour dates can be purchased here.

Your sophomore album, 28 Days in the Valley, is deeply personal and spiritual. How difficult was it to pull the lyrics and music out of you into this soul-stirring record?

Dorothy: Sometimes, when you think too hard, it can be difficult to write. Sometimes the ideas flow directly to you as if you’re channeling something (either from the ether or your subconscious). Either way, writing is very fulfilling, and I try to be as honest as I can. I love when lyrics pour out fast as if someone else is speaking them to my mind. That’s how “WE ARE STAARS” was written.

You and your band worked with producer (and songwriter and music maker extraordinaire Linda Perry), whom you’ve mentioned “pulled the lightness out of me, both personally and musically.” Can you elaborate on that?

D: Yeah, she told me to lighten the f*** up. I became more comfortable being vulnerable and looking inside myself for the truth. She helped me grow and evolve as a songwriter and artist.

Since as far back as you can remember, what drew you to music and to sing originally?

D: I listened to a lot of my dad’s old vinyl collection. I was really drawn to oldies, classic rock, and blues music. Music made me feel free and inspired. I think a lot of people can relate to how much music improves their lives. 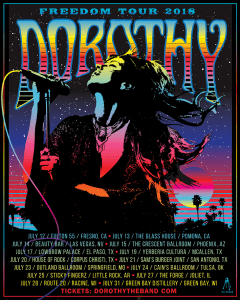 You guys did a string of shows with the Greta Van Fleet boys whom I adore, and you have a show in August with the indomitable Joan Jett! How have these experiences been for you and the band so far?

D: Touring with GVF is so much fun. I’m amazed at how kind and humble those boys are. Their fans have been loving and accepting as well. As for Joan Jett, I’m still pinching myself.

Besides writing and singing your own music, do you play any instruments, or have previous experience playing any?

D: I use acoustic guitar and keys to write. I have an old acoustic guitar at home, but I was strumming my manager’s DCX1E, and it definitely had some magic in it from when Bill Corgan used to write songs using it.

D: Women are in a more empowered position than ever. Those who had no voice before, and fell prey to abusers in positions of power, have the loudest voice now thanks to social media. I think we are making great progress in not just the music, but entertainment industry as a whole. I would like to see more women, in the rock genre, at the top. I know it’ll happen.