The French and American married duo that makes up Freedom Fry have gained momentum and traction in a short amount of time with their music. They have over 50 million track streams on Spotify and have received spins on popular radio stations like KCRW, KEXP, KROQ, WXPN, and BBC, among many others.

Currently making their home in California, the music of Freedom Fry reflects the state they live in; full of sunshine and plenty of warmth. Their music has attracted music supervisor’s, who have placed several of their songs in popular television shows like Netflix’s “Love,” Showtime’s “Shameless” and “Grey’s Anatomy,” to name a few.

The duo just released their debut album Classic, and chatted with us about it’s creative process, including the writing and recording of it, and how music draws the couple closer to each other.

Your debut album, Classic, was just released on Friday, June 1. Congrats! While you guys previously have released several singles from the album, what was the creative process behind the making of the album?

Freedom Fry: Thank you! It feels good to have it out in the world. We have certain times of year when we’re writing more than others. Usually in the winter when things slow down a bit. When we get in that mode it’s almost like turning on a faucet of song ideas. We entertain all the melodies that come to us and try to record the ones we think are best.

We started to realize that we were beginning to amass a group of songs we felt strongly about that fit together nicely. It was leaning a bit more folk than some of our other releases, but we didn’t fight it, we just explored it. It felt a bit new, it felt a bit old-school. Then we wrote the song “Classic” and it occurred to us that that word kind of sums up what we were going for. A timeless production approach. Live instruments. String arrangements. We tried to steer it in a direction that wouldn’t sound dated ten years from now.

What was the creative process like in writing and recording Classic?

FF: Almost every single song began on the acoustic guitar in our living room. We made a point to ourselves to not do our usual thing of writing over drum beats. We finished the songs from top to bottom in our house before taking them into the studio. That alone felt like a retro approach in this day and age.

From there we put down a scratch acoustic and scratch vocals and began to build the tracks on those elements. We took the Pro Tools tracks to our friend Kiel Feher’s house and he played the drums in his studio on all the songs. The trumpet on “Classic” was played by Stewart Cole of Edward Sharpe and the Magnetic Zeros. We tracked that at his house.

The string arrangements by Phillip Peterson were tracked by him in his Seattle studio. The group vocals were done at WAX LTD in Hollywood. Almost everything else was done in our home studio, The Cactus Garden.

Since you guys are married, has music always been something that draws you together?

FF: From day one that was what connected us. We met on a music video set and we were singing songs to each other in-between takes. Flirting through music. Then we started dating and formed the band very shortly after. Each song feels like a child we created together. They’re our babies. We get attached to them because making them is very personal for us.

You guys have a couple of release shows. Do you plan to have a mini or full-tour also?

FF: Yes, we’re looking for opportunities to take the album on the road. As an indie band we’re always trying to find tours that don’t put us financially in the hole. So sometimes things like that take a minute to present themselves. In an effort to not wait around we’re also planning to play in support of a documentary we’re releasing in the Fall. The documentary follows us on the first tour we ever did with Stromae in 2015.

Do you guys use any specific gear when you play?

FF: Our sound is basically Taylor Acoustics and Fender Electrics… Stratocasters. Strymon and Diamond pedals are always on the old pedalboard. They just sound SO good. We have a beautiful 1965 Gibson 12 string that winds up on a lot of our recordings and we just got a Victoria amp and are absolutely in love with it. 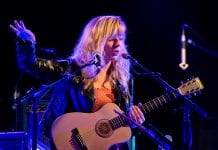 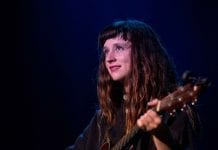 Waxahatchee performed at the Neptune Theater on July 24, 2017