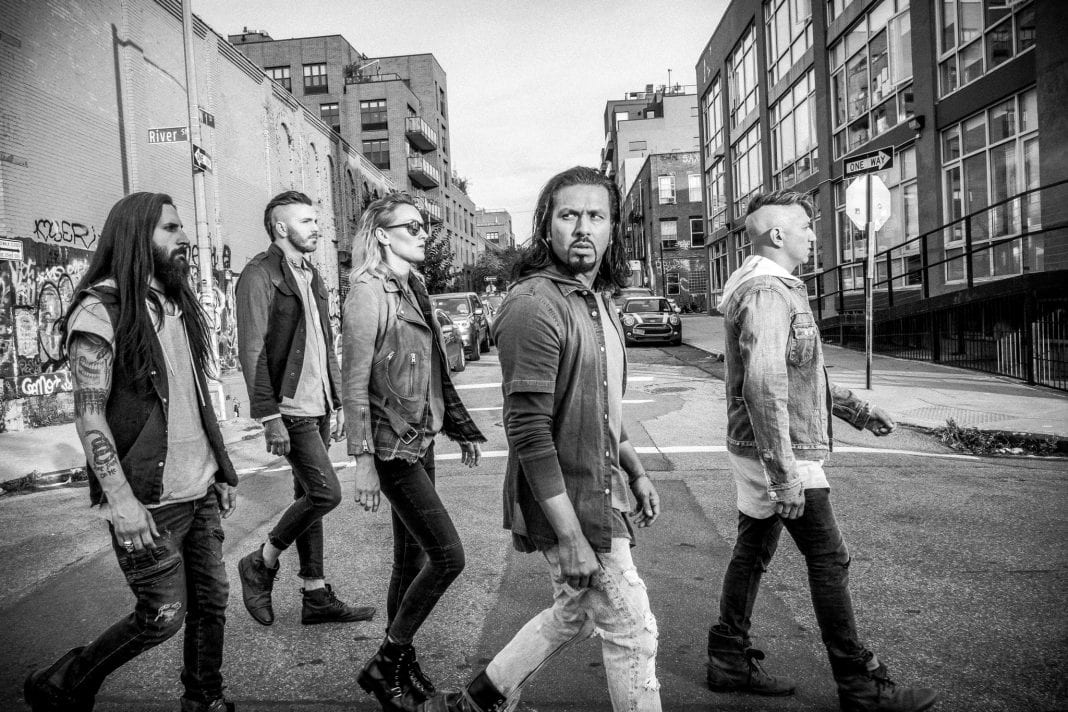 Michigan rock band, Pop Evil, have been relentlessly touring in support of their self-titled LP released on Feb. 16 of this year. They have released three singles, thus far, this year, with “Waking Lions,” “Colors Bleed” and most recently, “A Crime to Remember.” “Chasing Lions” has also landed the number one spot on the Mediabase Active Rock airplay chart. They are currently touring with Poison on there “Nothin’ But A Good Time 2018” tour, with headline and festival dates scheduled well through September. Full tour dates and ticket information is available here.

While on the road, Pop Evil’s drummer took some time to discuss sharing a bus with a bunch of guys (it’s not that bad), her history with playing drums and other instruments, and being involved with the latest self-titled LP recording of Pop Evil’s new album, and much more.

What’s it like being the only girl sharing a bus with three other guys?

Hayley Cramer: (Laughs) It’s not just three guys it’s 10! Band and crew all travel together. I don’t think it’s necessarily a girl/guy issue. It’s more whether an individual is cut out for living in such small quarters and in close proximity to multiple people. I’ve known guys who leave this career because of not liking life on the road. I personally love it. But it’s not for everyone. You have to be very mindful of the other people around you 24/7 and also self aware. Learn not to get annoyed at stupid things and always try to bring positive vibes to your team even when you’re super tired, etc.

You were previously the drummer in the all-girl rock band, McQueen…was it hard to transition as being the only female to Pop Evil?

Hayley: I’ve been in many bands from the age of 14. Some known and some unknown. I’d say I’ve worked with more male musicians than female ones so I didn’t find it too much of a change.

What’s your history with playing drums? Did you always play the drums, or did you start out playing a different instrument?

Hayley: I started playing piano at the age of 5. From there I worked my way through various different instruments but fell in love with drums at the age of 11. When I first sat at a kit I immediately knew that this was exactly where I should be and what I should do with my life.

Are there any other instruments you play or like to play other than the drums?

Hayley: I still play the piano. I played all the piano parts on the current Pop Evil album. However I don’t crave to perform piano in the way I perform drums. Piano, to me, is a personal hobby and I want to keep it that way. It’s one of my favourite ways to relax in my downtime.

You guys are currently on tour promoting your self-titled album, which was released in February of this year. What was it like being involved in the writing and recording process?

Hayley: We had a great time writing and recording this album. We spent 6 weeks in a house in Michigan writing together and then 6 weeks at Sound Emporium studios in Nashville laying down all the drums, bass, piano, organ, percussion and rhythm guitar parts. We then moved to Sphere in LA for vocals and lead guitar lines. Working with the late Kato Khandwala was one of the most life changing experiences I’ve ever had. My drumming is forever enhanced due to spending the weeks together in the studio. Everyday, experimenting with sounds and grooves. He was an incredibly clever and inspiring man.

What gear do you use while recording, and in concert?

Hayley: I’m currently endorsed by SJC drums and Zildjian cymbals. I did however use a mixture of drums in the studio. Which were a combination of DW, SJC, Sakae, Ludwig and Roland Electronic drums

What do you want girls to know that look up to you as an influence/and or are encouraged by seeing you on stage?

Hayley: My hope is that the next generation of girls not only in the music industry but in all industries know that they can go for, and achieve, anything they set their mind too. There’s still work to be done on equality but the path is definitely a little clearer now.