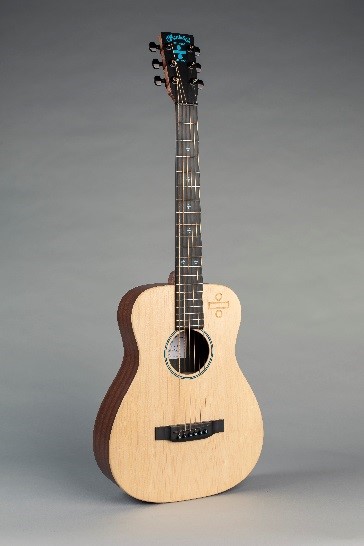 Nazareth, PA (Summer NAMM, Booth 801) – June 22, 2017 – C.F. Martin & Co.® (Martin Guitar) and Ed Sheeran have joined forces once again to deliver the third in a series of Ed Sheeran Signature Artist Edition guitars. The newest installment from Martin Guitar celebrates Sheeran’s long-awaited third album ÷ (Divide). In 2013 and 2015, Martin Guitar and Sheeran unveiled their first and second collaborations, with each guitar custom designed to celebrate the artist’s first and second albums, respectively. His fans bought them up in record time. The latest model has been available for pre-order since April 21st and will be available for delivery beginning summer 2017. To find an Authorized Martin Dealer to pre-order the model, go to http://www.martinguitar.com/.

After selling millions of records and taking a year-long creative hiatus, Ed Sheeran, has emerged with a new chart-busting album and his latest Custom Martin guitar. Sheeran designed the guitar with the luthiers at Martin, a collaboration that has produced the very tools that are instrumental to the Grammy Award winning artist’s signature sound. Sheeran’s newest signature model stays true to his love for Martin’s LX1E Little Martin, which offers unparalleled tone from a small body guitar, and continues with his mathematical-themed album cover art which adorns the guitar’s headstock and the solid Sitka spruce wood top. The guitar also features a matching blue rosette, around the soundhole, and is constructed with mahogany high pressure laminate (HPL) back and sides. The model comes stage-ready, equipped with Fishman Sonitone electronics, Martin SP Acoustic strings and a padded gig bag.

“Ed Sheeran’s immense talent and innovation have earned him much deserved respect and popularity from fans and fellow musicians alike”, said Chris Thomas Director of Marketing for C.F. Martin & Co. “Standing alone on a huge stage with nothing but a small guitar and a loop station is a unique and admirable approach to touring with such mega hits. It’s clear that Ed loves what he does and gives it all back to his fans each night in the sold out arenas. We are honored to be a part of it and pleased that Ed’s Signature Martins serve him well.”

As if there aren’t enough reasons to snatch up this guitar, Sheeran is once again donating 100% of his royalties from the sales of each guitar to East Anglia’s Children’s Hospices (www.each.org.uk), a UK-based charity in his hometown. The organization, whose Royal Patron is The Duchess of Cambridge, supports families and cares for young people with life-threatening conditions and provides services across several UK counties, including Suffolk, where Sheeran was raised.

“We’re so grateful to Ed for once again choosing to raise money and awareness for EACH in this way.” said Graham Butland, EACH Chief Executive. “He’s a fantastic ambassador and highly valued supporter, as he continues to show generosity not only through guitar sales but also through clothes donations, performances and more. A big thank you to Ed, C.F. Martin & Co and all those involved in the Signature Edition project. As with the previous two guitar sales, this will provide a real boost for the children, young people and families we support.”

C. F. Martin & Co. (www.martinguitar.com) has been creating the finest instruments in the world for 184 years. It continues to innovate, introducing techniques and features that have become industry standards, including X-bracing, the 14-fret guitar and the “Dreadnought” size. One of the world’s leading acoustic instrument makers, Martin guitars are hand-made by skilled craftsmen and women, who use a combination of new design and techniques, along with those introduced by the company founder.

The company is also known for producing high-quality, popular acoustic guitar strings. These include Martin SP®, comprised of three unique product lines (SP Lifespan, SP Acoustic and SP Flexible Core) all containing the industry’s strongest and most stable core wire to hold tunings better and stand up to rigorous practice and performance schedules.

Martin guitars and Martin strings are the instruments and strings of choice for musicians around the world, from the icons of rock, pop, country, folk and bluegrass to those just beginning their careers. They can be seen across all segments of pop culture, from television to movies, Broadway, books, online, and gracing the covers of popular magazines on newsstands everywhere. Connect with Martin and Martin Strings on Facebook, Twitter, Tumblr, YouTube and via www.martinguitar.com and www.martinstrings.com.

About East Anglia’s Children’s Hospices (EACH)
East Anglia’s Children’s Hospices (EACH) supports families and cares for children and young people with life-threatening conditions across several English counties. Their care and support is tailored for the needs of all family members and delivered where the families wish – in their own home, at hospital, in the community or at one of three hospices.

EACH delivers a wide range of services through short-break care, emotional & psychological support, symptom management, care at end of life, bereavement support and many activities & therapies.

For both families accessing care, and those who have been bereaved, EACH is a lifeline at an unimaginably difficult time. They rely on voluntary donations for the majority of their income.

EACH Royal Patron: HRH The Duchess of Cambridge. To contact EACH visit www.each.org.uk.