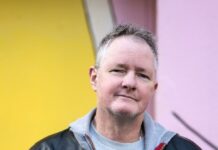 Austin, Texas based husband and wife duo The Ghost Wolves released their new music video for “Strychnine In My Lemonade” from their new album TEXA$ PLATINUM.  Comprised of Carley Wolf on vocals and guitar with husband Jonny on drums, the duo was formed in 2010 and has been making get strides on the music scene with their eclectic performances, relentless international touring, and collaborations on art and fashion.

TEXA$ PLATINUM was produced by Mike McCarthy at his private studio in Austin at the end of 2016. McCarthy has produced albums for artists like And You Will Know Us By The Trail Of Dead…, Spoon, OBN III’s. The record was mastered by Howie Weinberg at his Los Angeles facility. Weinberg also mastered Nirvana’s Nevermind album, as well as records for the Beastie Boys, The Clash, White Stripes, U2 and many others.

Check them out HERE.