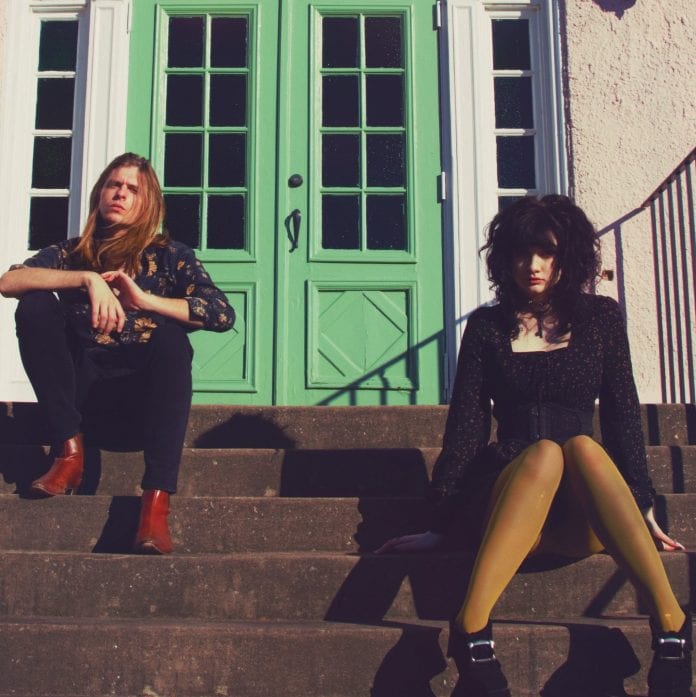 Dubbed “Tennessee’s Strangest Duo,” Cameron Briley and Hunter Cross are the brilliant minds behind The Skeleton Krew. Together they bring to life an entrancing mix of Americana, Blues, and Psychedelic Rock with gothic storytelling. And their unique style has not gone unnoticed.

Since releasing their EP The Fall in 2018, Briley and Cross have won four Tennessee Music Awards and have toured throughout Tennessee and Alabama.

Recently, Briley chatted with us about playing the bass, The Fall, musical philosophies, and danced around a few secrets she shares with Cross.

What type of bass do you play?

So my main bass right now is an Eastwood National Reissue, which is like a reissue of all those old fiberglass Sears and Roebuck or Montgomery Ward Guitars.

And you use Elixir strings as well, right?

Oh, yeah! Elixirs are a hundred percent my favorite.

They’re just so easy, it’s like butter, they’re just slick and easy to play, and they’re comfortable and they last forever. I got the same set on that I played all summer and they still sound fantastic.

Now I read that you used to play flute and percussion. How did you also end up playing the bass?

Well, I always wanted to play bass, as I would rather play bass. But then it was sort of a situation where I had asked for, gotten, and decided I didn’t like so many instruments that it was like, you know, you’re going to play what you have for a little while because I knew I wanted to play something. I just didn’t know what!

I finally decided I want to play the bass. I played flute in my school, and then percussion I played for a little while just for fun. And then I finally got a bass when I was 14, and that’s what I settled on.

What was it about the bass?

I was always really attracted to the rhythm section, and I always thought that meant I’d be a drummer or a percussionist. But in playing the drums and playing things like marimba on rhythmic instruments, I kind of realized I wanted to also be a little melodic. My middle and high school band director had a bass guitar in his room, and I just kind of fiddled around with it and I was like, “Oh! This is really cool. I think I’d really like to do this.”

So music has always been a big part of your life then?

Yeah, my family has a lot of musicians and entertainer type people. My grandfather was a professional wrestler. My dad was in a band. My mom’s stepdad is a musician — he’s a saxophonist. So, yeah, music just runs in the family. And it’s something in the water here in Jackson. I think everybody here are musicians. It’s kind of like a Rockabilly-Nashville!

What about the band name The Skeleton Krew?

My frontman, Hunter Cross, that was primarily him name wise. He’s really creative with stuff like that, so because we’re just two people, we are a skeleton crew. And the fact that it’s spelled with a K — he won’t tell me why. I tell people it’s because of the keys [that we wear]. But there was already a band called Skeleton Keys. But every time I say this, he’s like “No, it’s not that. It’s not that!”

So the keys, I see you’re wearing one. What’s the story behind them?

So our skeleton keys, I can’t reveal everything, but we may or may not be a little bit of a secret club or a secret society with our little keys. We always know who’s a member of our little inner circle if they’re wearing one, even if we don’t know them personally. Super secret!

So like you said it’s just the two of you, but when you’re in the studio, you bring in drummers as well.

Yeah. So it’s he and I, and then when we go into the studio or when we play an electric set, we’ll hire out drums and keys. Recently, we brought in a cellist. So that was really cool! We just hire out whatever we hear in our heads when we listen back to kind of fill in the gaps.

So your EP The Fall came out in 2018. What was it like being in the studio recording that?

So that was a really fun experience. Definitely a learning experience because that came out when I was 21 years old and Hunter was 23 years old. So we were really, really young. We started out really, really young in the grand scheme of things. So it was the first time we had really sat down with a really clear idea of what we wanted. Patrick Foley produced The Fall for us, and he’s continuing to produce our stuff now. So it was like our first real-life professional studio experience, and it was just really educational and we’re really proud of it.

Getting into your music, what some of the biggest themes you tend to draw on when you guys are creating?

I would say the biggest word that comes to mind, and the big buzz word that we give everybody is Southern Gothic. So when you think about Southern Gothic, you think of old churches, nighttime, the fall, the Spanish moss, and the graveyards. It’s just themes of that nature sort of mixed in with the really heavy rockabilly culture that comes from Jackson.

Are there any stories that are worked in your music?

I like to tell people what Hunter essentially tells me. We don’t tell people what the songs are about. We like to let people hear what he has to say [as the primary lyricist], and what I have to say, what we both have to say, and apply that to their own lives. I think if we came out and told everyone what it all means, it would mean less.

So last question, what advice would you give to, say, teens who want to get into music? What is a piece of advice you can give?

Don’t be afraid. Just do it. It’s okay to be bad because let me tell you when I was 15 years old when I first started playing and I recorded in a studio for the first time, I was bad.

And I would also say that you’re always going to feel like it doesn’t matter how good you are. You’re always going to feel like it’s only a matter of time until somebody figures out that you’re not good or you’re not actually talented. That’s not going to go away. You just have to ignore it, because, at the end of the day, that’s not true. That’s just something that your brain tells you. So just do it. Just go out and do it. Play what makes you feel moved. Doesn’t matter what it is.