Home Interviews Interview with Female Rocker and Warrior Malina Moye on a Mission to... 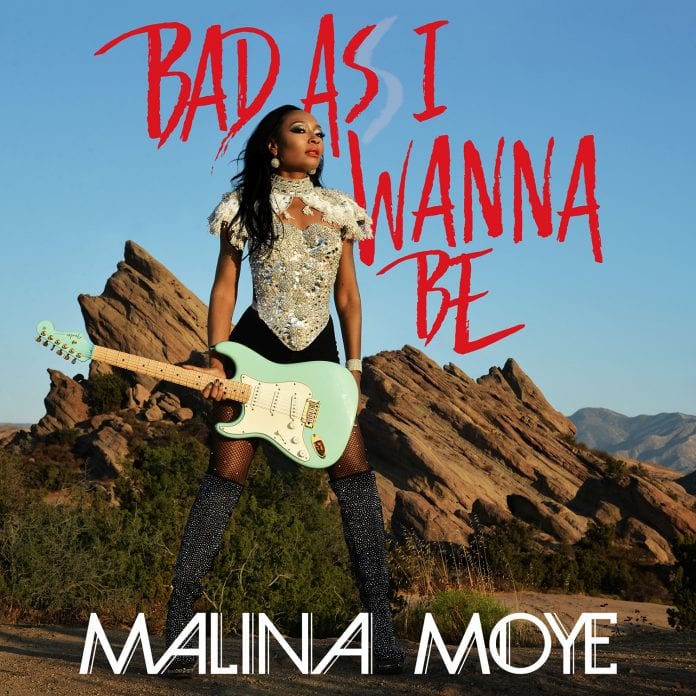 Malina Moye is a a unique rocker who blends traditional music genres including rock, soul, and funk into her own unique sound.  A left handed Fender player who plays her instrument upside down (like Jimi Hendrix did)…and if you are a right handed guitar player , you know that is a confusing concept to even get your head around.  But, she does it and does in well!

Now, with her new album “Bad As I Wanna Be” scheduled for release in March 2018, GGM had a chance to catch up with Malina and she shared with us her inspirations as a young developing artist, her love of the’ 60s era music and sounds, her new album, and challenges she and other diverse females face in the music industry today and shares with us advice for young aspiring female artists on how to overcome and rise above.

Can you share with our readers your early inspiration to become the person you are and what you think is your calling as a female musician who rivals some of the great lead guitar players of the ‘60s and beyond?

Wow!! Thank you, that’s an incredible era of phenomenal artist and musicians to rival (lol). I think I’m just a fan of the notes, the music, and always blown away knowing that putting them in sentences can create emotions and connect with people. I always wanted to be an entertainer. I love everything about it. I think my calling is to be as authentic and real as I can be and live in my truth. By doing this in life and on stage, maybe it will allow a few others to find the same freedom.

“Bad as I Want to Be” is quite a statement…you are a lead guitar player, a song writer, and a thought leader for female artists that love to rock.  Who were your early influences and what do you attribute to your success at this stage of your young career?

At first I just want people to understand that you are enough and you don’t have to prove yourself to anyone but yourself. But now, the title itself is starting to have a life and power of its own, which I think is really cool. Be your own superhero. #celebrateyou. Be as ‘bad as YOU wanna be.’ Love the skin your in. With my influences, I’d say my parents. They instilled in my brothers and me that hard work, persistence, belief, and focus are essential to any type of success. The main thing is to never quit.

You are a left handed guitar player, and you play what looks like an upside down Fender Stratocaster like Jimi Hendrix (at least when you look at the head stock), but the body is designed for a lefty…what kind of collaboration went in to creating your Fender instruments?

I think after years of playing you start to see what helps you become a better player. The great thing about being in the Fender family is they want you to be the best you can be and will go to great lengths to help you achieve that. My favorite Stratocaster is a left-handed body with a right-handed head stock, but strung in reverse. I play them upside down. My pickups are DiMarzio and my string choice is Dean Markley. I’m naturally left-handed.

“My goal is to take the music that influenced me, let it inspire my writing, but evolve the music into something for today’s audience.”

At a time where what some people are saying the guitar seems to be fading from the music landscape, you seem to be sounding an alarm that it is not dead, and all people have to do is listen to your powerful vibe and blend of ‘60s rock icons and late funk bands to realize this may not be true.  How do you see yourself fitting in to the musical landscape?  You know, are you rock, funk, soul, or something unique that is you, and something that we can all embrace that is new?

Thank you for the compliment, I like to think maybe the world needs to see and hear music wrapped in a different package. My goal is to take the music that influenced me, let it inspire my writing, but evolve the music into something for today’s audience. There are so many color tones to each genre and I think that’s what makes music interesting and hopefully something fresh, yet radio friendly.

“And, please, take the same effort looking through social media and turning over rocks to highlight diverse women who are playing as well.”

We know that there are challenges being a female lead guitarist in this traditional male-dominated space, but not only are you female, you’re African American…tell us about the challenges these two identities have presented to you.

Excellent question. Yes, for me as one of the first black women breaking through the wall currently, I’m focused on several obstacles. But you already see the absence and the fight women in general have to deal with in the music industry—now add the African American part to it. With that, I don’t really see my purpose as some arduous challenge necessarily, but more as a mission to redefine the status quo.

For instance, on the “Rock” side, the world has a vision of what they think Rock looks like and sounds like. I’m saying to those Rock artists and the media that shines a light on those artists, hey, redefine what you’re used to, and find an artist who your audiences wouldn’t ordinarily see, and let them open up for you. This trickles down to program directors, playlists, and so on, opening minds along the way.

I see a lot of the guitar magazines and think wow they sure do have a lot of guys. Don’t get me wrong, it’s wonderful some of them are now covering a few girl players, but what about the many other diverse female players who aren’t even considered for high profile Rock gigs because a part of society thinks they would never be interested in playing this “type” of music. Or for example, those editors saying, “our readers won’t identify with a dark, female bass player from Brazil.” I simply say, you might be surprised and they may love her.

Kudos to those few editors who include diverse female musicians. Now I’m asking to please highlight and promote, or as I like to say, give “equal playing time” in those magazines. This is very important. How do you think young musicians are ever going to see what’s available and possible if they’re not represented? And, please, take the same effort looking through social media and turning over rocks to highlight diverse women who are playing as well.

One of the best things anyone can do is change and evolve with the times. So many are saying the guitar is dying, yet so many people are picking up the instrument to play. We are in the social media era of the most YouTube covers, rock bands, guitar solos and any video tutorial you can find by a simple key stroke. I’m just trying to do my part by showing up and being the best I can do no matter what and hopefully make it a little easier for the next person.

How would you define your genre, I mean, I hear everything from Hendrix to The Chambers Brothers’ “People Get Ready,” and it’s all good!

I’d say, let me turn it around and ask YOU. Did it move you or resonate with you? That’s all that matters. But because the industry and media like to have a label as a point of reference, I would consider the new record as Rock with elements of soul, funk, and RNB. The goal with this album is to use those elements in my music and make it contemporary for today’s market.

We, along with all of your fans, are looking forward to your new album Bad As I Want to Be due out in March.  What can fans expect?

I’m excited that your excited! I hope it’s my style and music that makes you move, but also think. As a songwriter I love to put hidden messages in my songs—kind of subliminal, especially when you hear songs like “Enough” and “Betta Than You.” I’m also excited that I got a chance to team up again with multi-platinum producer Bjorn ‘Polar Bear’ Soderberg who ‘gets’ my sound then makes it radio friendly.

And, lastly, what advice do you have for young aspiring female artists today wanting to pursue a career in the music industry?

I would say now is a wonderful time to be in the music industry and entertainment as a whole. There are so many women who are standing up and demanding change. In the era of social media, the ability to create your own brand, put it out there, then gain a following is powerful. Actually it’s essential and it can get you in the ears of listeners and in front of the media faster. The time is now!!! We need a good justice league of heroines! The more the merrier!  Everyone counts and plays a part.

Check out her new video on Bad As I Wanna Be!

You can also catch Moye as February’s featured artist in our
Guitar Girl Magazine 2018 Calendar.