Home Interviews Interview with Jackie Venson on Guitars, Berklee and her Truth in Music... 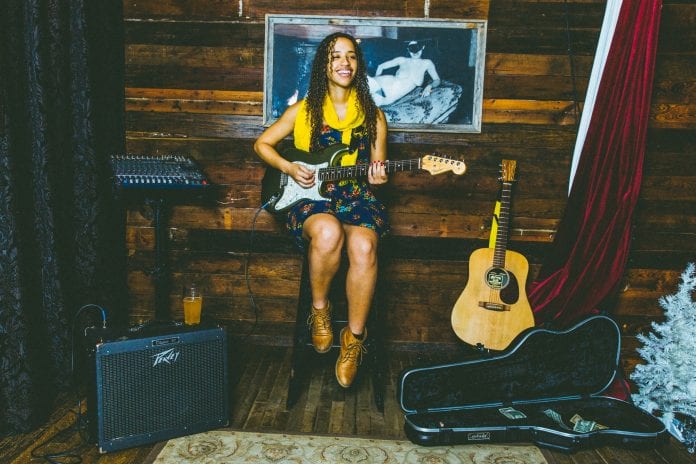 Austin native Jackie Venson began playing piano at the early age of eight and grew up on classical music ultimately attending the acclaimed Berklee College of Music. It wasn’t until after Jackie graduated from Berklee that she decided to pick up the guitar and began a new musical career.

With heartfelt songs written and performed with such sincerity, Jackie performs with style and grace. Her exceptional instrumental skills on both piano and guitar and her velvety smooth voice can be heard in her bluesy jazz tunes like “Show My Light” and “Beauty of Love,” while a raw, soulful and powerful sound comes through on her blues rock song “See What You Want,” and yet a pleasing acoustic performance shines through on “Always Free.”

GGM:  You were originally a classical pianist that began playing at the young age of eight and then ultimately picked up the guitar. Tell us a little about your background and how you got involved in music as I understand your family was and still are very encouraging?

Jackie:  At first it was very hard for me to learn how to play the piano. My mother actually had to sit down with me the first two years I played and teach me the songs one by one so my teacher wouldn’t be disappointed that I didn’t practice. Fortunately she knew how to read music from childhood! After a couple of years of hand holding I finally got the hang of learning songs on my own, my teacher let me pick songs that I liked, and I really did enjoy the lessons. The songs got more and more challenging and I began delving into some serious classical music (Rachmaninoff, Liszt, Chopin). When I went to Berklee they weren’t too thrilled with my classical skills, they preferred jazz. After three years of wandering through school, wondering what I was going to do, I picked up guitar so I could start with a clean slate.

GGM:  I read where your college experience wasn’t quite to your liking which led to a hastened graduation. Tell us how that experience unfolded and was there a major turning point for you during that time?

Jackie:  Honestly I just wasn’t prepared for what it was versus my expectation. I was just out of high school and far, far from home (and the nice sunny weather), also I just had the misfortune of meeting too many unpleasant people and not enough cool people. It wasn’t until my later years at the college did I really have friendships that still last to this day. Honestly everyone’s experience there is different, some people loved every second! Perhaps I just had to go through that to end up where I am now. This thought was the turning point during my last semester. I was disappointed in myself for letting the experience get the best of me and diminishing my spirit so I decided to take on a new challenge and start my life over. “I’m graduating, I’m going home and I’m playing guitar gosh darnit!”

GGM:  Can you describe your music for us and who were your musical influences, and was there any one person or band that changed your world?

Jackie:  Whitney Houston, Amy Winehouse, Shoshana Bean and pretty much any singer who sings with depth and skill. These are the folks that had me interested in performing music at an early age. I’ve always been a sucker for singers and I always will be – it’s why I started singing. Stevie Wonder is a huge songwriting influence as well as Kendrick Lamar. For guitar I’m just gonna leave it at Buddy Guy and BB King – they are a world of their own. Honestly it’s hard to name all my influences, I’m influenced by everything!

GGM:  Let’s talk about your gear, what guitars do you play and what’s your set-up for performing?

Jackie:  I play a 2012 Fender Strat American, I typically prefer a Fender Blues Deluxe or a Peavey Classic 30. I use the Boss RC-50, Boss DD7, Boss DS1 Keely Modded, and the Boss OC-3.

GGM:  Can you share with us your latest musical endeavor and your album The Light in Me?

Jackie:  My latest endeavor is the continuation of my YouTube series “Truth in Music.” I have some more singles and videos coming up, I also will be printing some new Deluxe Edition and BSides CDs – I’m looking forward to getting those out there. The album The Light in Me is where I’m leaving folks off while I grind grow on the road. I’m always writing and I am working on an album but it will be a little while before it’s out. This next album is very important to me and I want to take my time.

GGM:  The YouTube video for the blues rock song “See What You Want” sounds great and has such a cool psychedelic vibe. What was the filming process for the video?

Jackie:  We filmed in front of a projector playing a video full of crazy VJ loops. Then in editing we messed around with the colors. Was a lot of fun!

GGM:  Besides music, what other hobbies and interests do you have?

Jackie:  I love my dog, I love horseback riding, playing video games, and chillin’ with my friends.

The top 3 songs on my playlist are:

If I could perform with anyone it would be: Lauryn Hill
My favorite song I’ve performed is:  Show My Light
My first gig was: High School Talent Show in ATX
In one word, music to me is: Energy

For more on Jackie Venson, visit her site HERE.