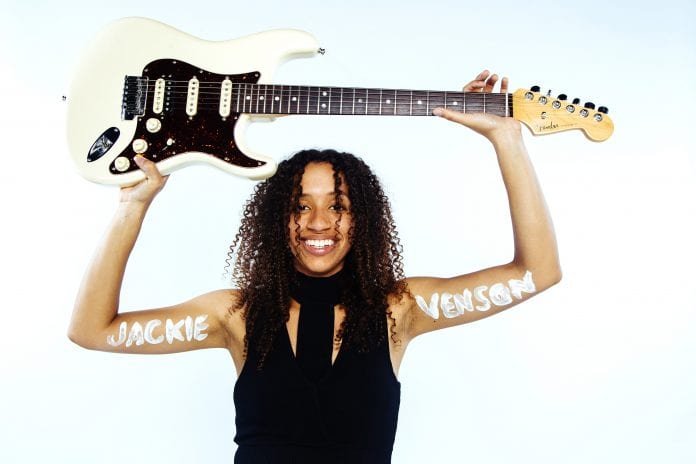 Austin native songwriter and guitarist Jackie Venson recently released her new EP Transcends which was produced by Michael Ramos (John Mellencamp, Los Lonely Boys, Paul Simon) and mixed by Boo Mitchell (John Mayer, Mark Ronson, Mississippi All Stars). This 5 song EP is a perfect blend of blues, funk and jazz with a slight touch of pop, and follows previous albums The Light in Me in 2015 and Jackie Venson Live in 2016.

We interviewed Jackie in 2015 about her background in music and you can read there HERE to learn more about this talented young lady. She is an exceptional guitarist, vocalist and songwriter which is evident in her new EP.

Fresh off touring with Gary Clark, Jr., Jackie took the time to fill us in on Transcends.

Transcends is your latest EP, just released a few weeks ago, which was produced by Michael Ramos and mixed by Boo Mitchell.  Tell us about this EP and the inspiration behind the music. To me, it’s a combination of blues, funk and jazz with a slight touch of pop.

I think you nailed it, it definitely combines those genres. The inspiration behind the music was that love is universal and is the thread that holds everything together. I really wanted to focus on the songwriting for this project and to begin being more known as a songwriter rather than a chick who can shred.

Joining you on the EP are Rodney Hyder on drums and Alan Uribe on bass.  Were they instrumental in the writing process?

I wrote the music and lyrics to the songs however the parts they came up with on their instruments are awesome and definitely add the energy and groove.

Is there any one particular song on the EP that resonates with you and, if so, why?

“Transcends” is a special song to me. When I perform it live I feel so free and it also is one of the few on the EP that feature a full-length guitar solo.

You also just finished a couple of shows with the legendary Gary Clark, Jr. How was that experience?

We did 10 shows together and it was truly a magnificent experience. Being able to see how his team all work together to make the shows happen and also being in front of his large and super excited crowds was an experience of a lifetime.

When we last spoke back in 2015, you were gear set-up for performing was a 2012 Fender Strat American, with a Fender Blues Deluxe or a Peavey Classic 30 amp, a Boss RC-50 looper, and Boss DD-7, Boss DS-1 Keely Modded, and the Boss OC-3 as pedals.  Are you still using the same set-up or have you made any modifications?

Definitely got some changes. I now play a 2016 Fender Strat Elite Series, I use a Fender Blues Jr or a Deluxe if it’s available. For pedals, I use Boss RC-30 and I’m still with the DD-7 and DS-1 Keely Modded. I’ve since left behind the OC-3.