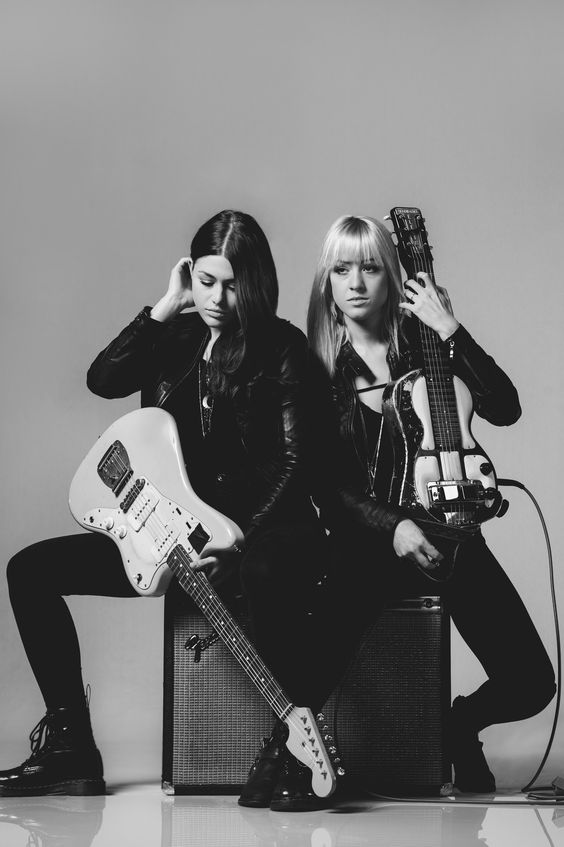 Sisters from the small town of Calhoun, GA outside of Atlanta have been experiencing great strides in their music over the last decade. Originally called the Lovell Sisters as a trio with older sister Jessica, the sisters later regrouped in 2010 as Larkin Poe (made up of Rebecca and Megan Lovell), a named steeped in history based on their great-great-great-grandfather,  who was a distant cousin of Edgar Allan Poe.

Classicaly trained in music at an early age by their parents, these sisters took that background in music and transitioned into a style of their own that they call “swampadelic.” Rebecca and Megan combine their musical instruments and lyrical compositions into an Americana, rock-infused, Southern soul album of 12 songs called Kin.

With this latest release  on Restoration Hardware’s music label,, the sisters have once again proved their success in writing great music and are currently touring with Conor Oberst to support their new music. They took the time to share with us their background, their music, and more.

I read where you describe your music as “swampadelic.” For our readers that don’t know you, please fill them in on Larkin Poe.

We’re two rock’n’roll sisters from Atlanta, GA! Larkin Poe was the name of our great-great-great-great grandfather on our father’s side of the family. Since Rebecca and I are sisters, we wanted to take on a band name that has familial significance. Larkin Poe, born in 1833, was a teamster in the 5th Georgia Cavalry during the Civil war and, to us, he is a figure that represents our deep southern roots and the folklore of our ancestry. Interestingly enough, he also was a distant cousin of the great poet and storyteller Edgar Allen Poe, a connection which we sometimes use as an excuse for our songs that may stray into darker territories. We’ve always enjoyed experimenting with a lot of different genres of music, but now with Rebecca taking up more electric guitar and Megan powering through on the lapsteel, we’ve landed on “roots rock and roll”; its gritty and dirty without losing our Southern roots.

Growing up in a small town in Georgia, what was your first exposure to music?

As children, we were heavily involved in classical music at the behest of our mom, but we also grew up listening to the music our dad was cranking in the car and on the home stereo. He instilled in us a deep love for the classics like Pink Floyd, Fleetwood Mac, the Allman Brothers, Crosby, Stills, Nash, and Young. Later in our teens, we delved into Roots and Americana music; incredible musicians such as Jerry Douglas, Alison Krauss, and Bela Fleck became our lifeblood. American roots music and southern rock is really prevalent in the deep South, where we grew up, so we feel lucky to have taken on that heritage.

Your family was obviously supportive and had you in music lessons at a young age. What instruments do each of you play?

We both started playing classical violin and piano from age 4. In our teens we threw off the classical training in favor of more americana instrumentation. Rebecca picked up mandolin, acoustic guitar, and, most recently, a harder-rockin’ electric guitar. Megan focuses on the slide guitars: dobro and lapsteel.

What was the first musical project you were involved in?

The first band we were involved in after our split from classical training was called “The Lovell Sisters”. We played Americana roots music with our older sister, Jessica, for about 5 years; touring the U.S. and overseas, playing everything from The Grand Ole Opry to Bonnaroo! After The Lovell Sisters disbanded in late 2009, there was never a question as to whether or not we would continue making music together – we had to; the urge to make music is not something you can just turn off. The split came just at a time when we were beginning to experiment with songwriting so it was the perfect opportunity for us to dig deep and create something totally new and different. The name change was another way for us to wipe the slate clean and start fresh.

Who are/were your musical influences that helped mold you to create the musicians you are today?

Bonnie Raitt; The Allman Brothers; Elvis Costello; The Indigo Girls; Led Zepplin; Johnny Cash; Ray Charles; Michael Jackson; Richard & Linda Thompson; Jeff Buckley… we could go on for hours. New artists, old artists – there is something to be learned and taken from anyone who has ever genuinely wrote, played, or sung a song from their soul. Right now, are biggest musical obsessions are Jack White of The White Stripes, Led Zeppelin, and the Arctic Monkeys.

Your latest album Kin was released last Fall. How have your fans reacted to the new album?

We’ve been blown away by the support ‘KIN’  has been receiving, especially for a debut. It’s been getting great reviews by well-respected publications. We feel deeply lucky to have met so many wonderful, supportive, appreciators of our music and are especially thrilled that our audience has followed us through our many musical transformations… That element of trust between the artist and the fans is wonderful and we look forward to growing through the next projects.

Share with us a little about the writing and recording process for Kin and has it differed from your previous work?

During the “early years” of Larkin Poe, it was always challenging for us to successfully write songs with one another. In retrospect, sibling rivalry probably had a lot to do with it. Leading into ‘KIN’, we decided to buckle down, put aside our different creative processes, and write together. Once we made the commitment, it was surprisingly easy! There’s so much of our communication that is wordless, so we can arrive at the same musical or lyrical conclusion almost simultaneously – it’s a pleasure; one of the biggest perks of writing as sisters. Going into the studio we really had no idea how the album would turn out… This was our first time in a “real” studio working with a producer, spending more than five days recording. We definitely learned a massive amount from the experience and will approach the next record with a different perspective. You roll with the punches, experiment, and learn from your mistakes. It’s a long winding road!

What was the inspiration behind the album?

The inspiration behind the album was to find our voice. We love so many different types of genres, instruments, sounds, etc, it can be easy to get lost in the possibilities. We really focused in on being authentic with KIN, and, while genuineness, vulnerability, and rawness are a work in process, we came closer than we ever have in finding our voices with KIN.

Do you have a favorite song from the album?

It’s hard to pick a favorite! I love Stubborn Love because it’s our “sister song” and it’s so truthful. Perform the song ‘Banks of Allatoona’ live is such a blast. It’s one of those songs that’s never the same from night to night. We might take a 2 minute solo or a 10 minute one; it really give us a chance to jam out and we love songs that keep us on our toes, new and fresh every night.

Larkin Poe has had the opportunity to work with artists like Elvis Costello and Kristian Bush. What’s one of the best lessons you’ve learned working with these artists?

We’ve been incredibly lucky to have been involved with some truly amazing artists in our career so far. Touring with living legends such as Elvis Costello, Conor Oberst, and Kristian Bush has given us enough inspiration for a lifetime. Being the leaders of a band ourselves gives us a unique perspective of being a hired gun, and being a hired gun gives us a unique perspective of being a band leader. It’s a positive vicious cycle that gives us a front row seat to how the greats do it. The thing all these amazing artists have in common is passion. They love what they do and keep themselves extremely busy doing it. They’re always elbow deep in some musical endeavor (sometimes two or three at the same time!) and “no” is not a word in their vocabulary. With an industry as tough as the music industry, perseverance and outright stubborn passion are essential.

As sisters who are so close in age, is there any sibling rivalry and, if so, how do you deal with it?

Working with family certainly has its pitfalls and challenges, but in our case we wouldn’t have it any other way! We may have experienced sibling rivalry in our teens, but now we’re closer than ever and have each other’s backs. As sisters who have spent the past two decades working and making music together, our ability to communicate nonverbally with one another is eery. Whether we’re sitting down to write a song or make a business plan we both instinctively know what the other is going to do, like we’re on the same brainwave. Conversely, knowing each other so well and having so many shared memories and experiences, makes it very easy to know exactly which buttons to push when we’re having an argument. We always work through the rough spots, though – love remains through thick and thin.

You’re heading back out on tour with Conor Oberst. What can fans expect?

Fans can expect a whole lot of Larkin Poe!! We’ll be part of Conor’s band (electric guitar, mandolin, lapsteel, and backup vocals), but we’ll also be opening the show as Larkin Poe. It’s going to be so fun!

Currently on tour, be sure to check their site to experience a show near you.  http://www.larkinpoe.com/