Home Interviews Legendary: The Badass with The Bass, Suzi Quatro

The moment she answered the phone, I knew this interview was going to be different.  Her tone was casual and sleepy, as it was already evening on her side of the world.

I prepared to launch into my first question with:

“I was doing some research on your work, and I really fell down the rabbit hole-“

The low, husky voice of Suzi Quatro on the other end of the line broke into my spiel.

“When I do interviews myself, I always do my research, because I don’t want to offend the person I’m talking to!”

“Right? That’s exactly how I feel!”

From that point on, I might as well have flung my notebook out the window, because the interview became a conversation, and the idea of me trying to inject the formal trappings of a PR interview into it felt…well, rude.

While many in the US remember her as Leather Tuscadero from Happy Days, in truth, that role was a mere fraction of her achievements. In the UK, Australia, etc., she and her music play now, as they have for the last 50 years. Bass slung around her neck, legs planted firmly, Suzi Quatro always has sung and played her own brand of rock and roll, conventions be damned, even at a time when women simply didn’t do that, and she brazenly paved the way so that they could. 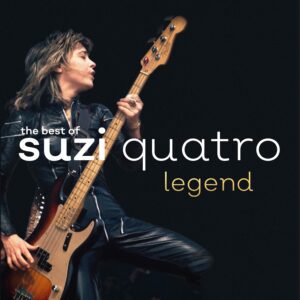 Suzi Quatro is a legend, and so there is really no better title that could have been given to her upcoming release than “The Best of Suzi Quatro: Legend,” a “20 track compilation album personally curated by Suzi featuring digitally remastered versions of all her biggest hits.” At 67 years of age, she has sold 50 million records, toured the world, become an icon, and has shown no signs of stopping. She will be headlining the “Legends Live” Tour in October featuring David Essex, The Osmonds, and Hot Chocolate.

And don’t expect her to wax nostalgic—because this is an artist who has carried the past with her up to the present, never allowing it to grow stale. When questioned about whether putting this compilation had “taken her back,” she replied that she plays these songs consistently in her current sets. She speaks passionately about her responsibility to the audience: to give them what they want in terms of old and new hits, to entertain them consummately, and to always, always, treat the calling with respect.

She spoke bluntly about her disdain for the Rock and Roll Hall of Fame, and their choice to induct Joan Jett before her. A good friend of Joan’s, Suzi knows first-hand the impact she had on Jett’s development as an artist, and so the induction seemed a bit cart-before-the-horse to Quatro and many of her peers. “I can’t take it [The Rock and Roll Hall of Fame] seriously anymore,” she declared.

Her directness will no doubt have a great impact on her students—Dr. Quatro plans to begin giving classes soon. She received her honorary doctorate in music from Anglia Ruskin University in Cambridge, UK, in October of 2016, and it’s not something she takes lightly.

I ask her if she has any words of wisdom she’d like to impart to the upcoming generation, and she emphatically DOES: “Be professional. This is a job. This is a calling. Learn your craft.”

When questioned about what she would specifically say to the women, she replies:

“Never think of yourself as a “girl musician.” You are a musician, period. I never did gender—don’t do it now.I’m a me-ist. I do me.” She pauses thoughtfully. “Don’t try to hide your femininity, but always have your line that mustn’t be crossed.”

I tell her that I’m furiously scribbling her words down, and she chuckles: “I’m very quotable!”

Suzi Quatro knows who she is. She is forthright and unapologetic and respectful of her place in history—even as she continues to create it.