Multi-layered and diverse musician Nik West is one of the best-known bassists in the world of music. West is perhaps best known for performing with the late and iconic funk-master himself, Prince, along with Quincy Jones and Dave Stewart of the Eurythmics. West has also graced the small screen on “Glee” and “American Idol” in numerous recurring appearances. She has shared the stage with such legendary musicians as Bootsy Collins, George Clinton of Parliament Funkadelic, and current favorites John Mayer and Sugarland.

For this issue of Guitar Girl Magazine, it’s only fitting that Nik West graces our cover. She is widely sought after for her talent and her unique, funky rhythm and bass lines. She has been heralded by her peers and music journalists with such adjectives as “energetic, inspirational, colorful.” She has also been featured on the covers of multiple magazines. Music icons Prince and Steven Tyler had this to say about her:

“Holy Funkadelic, I felt this girl’s energy the first time I was in her presence, I knew there was something special about her with that hair” – Steven Tyler

West took a short break from touring the UK to speak with us about her music, playing bass, her upcoming wedding—she was recently featured on TLC’s “Say Yes to the Dress”—and much more.

One of the many qualities that is obvious with West and her music is that she genuinely loves singing and performing, especially to diverse audiences. “I love bringing all of my music to life. Visuals, story-telling, and, of course, I love to entertain. I get to know audiences all around the world, and each inspires me to do something a little different each time. From crowd-diving to improvising on a new song.”

Why the bass, we asked? It’s evident she loves the instrument, which is evident any time she performs. She says, “I love the groove of bass because it makes the booty move! And when booties are moving, everyone is happy! Bass for me is a love affair, a stress reliever.”

Her latest single is fun and upbeat. Called “Purple Unicorn,” a name that seems influenced by Prince himself, West says, “This single was actually written by my sister. She was playing around in the car one day and started saying, ‘I’m the Purple Unicorn.’ Everyone was already saying that about me and my image, so we went with it. The music video was all of my concept, and I wanted it to be fun and purple!” This single is one of many on her upcoming album, which West says she just finished recording.  “Right now, it’s being mixed and mastered. I’m so excited because there are a lot of catchy tunes that I know people will love” West collaborated with her bass hero Larry Graham, plus included the talents of Macy Gray, Cindy Blackman-Santana, Buddy Strong of the Dave Matthews Band, and many more.”

West filled us in on the back story on meeting Graham.  “Larry Graham is my bass hero. Prince wanted to introduce me, and he was shocked we had never met. Every time I was at Paisley Park, we talked about it, and he called him a few times while I was there, but he wasn’t available. So, we kept missing each other. It wasn’t until Prince passed that Larry reached out to me. He told me that he loved the way I played. He said, ‘many bass players have a million notes under their fingers and in their head, but we don’t feel what’s in their heart. You play with all of your heart, and that’s why I want to work with you.’ He told me that he was crowning me Queen of Funk and I would be the new funk hero. I took it and ran with it! I was just so shocked that he had been watching me for so long.”

The album was recorded in Minneapolis in just one day thanks to the prework between Graham and West.  She tells us, “Larry already had the concept for a song. He had already written the choruses, and my job was to write the verses and record one of the bass lines and bass solo. He and I produced it.”

We also chatted about recording techniques, sound, and tone from our popular Tone Talk Column:

When it comes to recording, are there certain recording techniques you prefer in the studio?

I’m very simple—have a great pre and a great mic and get going. I don’t use a lot of effects or autotune. I like to get it right as if I’m doing it live. I recorded most of my bass lines at home and many of the background vocals. For lead vocals, full band takes, or drums, I record those in commercial studios. I worked with Cindy Blackman Santana and Larissa Basilio on a song called “WE CAN DO IT.” Cindy and I recorded that at Tarpan Studios in the Bay Area. She’s a pro and recorded all of her drum parts in two takes. I had the studio reserved for a few hours, and she did it all in 12 minutes!

For one, I play the same basses, and I know how to dial in my tone on pretty much any amp. I use pedals in some songs which I take along with me, so everything sounds the same. The biggest thing is KNOWING how to dial in your tone no matter what you’re given in backline. I’ve become very good at that. Because all amps are not created equally.

My definition of tone is the sound that comes from my fingers first. I know this is slightly different than guitar…but for bass, most of it is in the fingers. I can give my same bass and amp sound to another bassist, but it would sound different. I always know that a bass is good for me when I play it, and it feels and sounds good before even plugging it into an amp. Of course, your string choice and amp is an extension of making the tone even better—or worse. Over the years, tone has changed “commercially” because the player’s mentality and basses have changed. Today things sound more juiced up and in your face. Players want to try new things, and companies offer many more options. Back in the day, it was just Fender. Bass stayed more in the background and people didn’t change their strings so much, and that created a cohesive sound on many of the old records. But Fender does a great job of offering the original sounding basses as well as the new juiced up ones—which I play!

Not only is West touring overseas and getting ready for her new album release, she’s also preparing for her wedding. Of being featured on “Say Yes to the Dress,” she says, “it was “CRAZY! There were so many beautiful dresses to choose from, but none of them would work for my off-the-cuff style. I had to get one custom made from scratch, and it was the first time the show had done that. I’m so happy with the results, and what was seen on TV was just the beginning. After doing the fittings and alterations, with add-ons of what I needed, my dress is perfect!”

For girls and women who are interested in learning or picking up the bass to start playing, West encourages those who do with fervor: “Go for it! Don’t be afraid to conquer any song. Don’t be afraid to jump into any jam session, even if it’s a room full of boys. The only way to become great is by playing with those who are much better than you.”

Pedals: Custom pedalboard that includes the MXR Envelope Filter that was sent via Bootsy Collins, a compressor with settings that I created with TC Electronics, a Danelectro Fuzz, and an OctaBass by EBS. 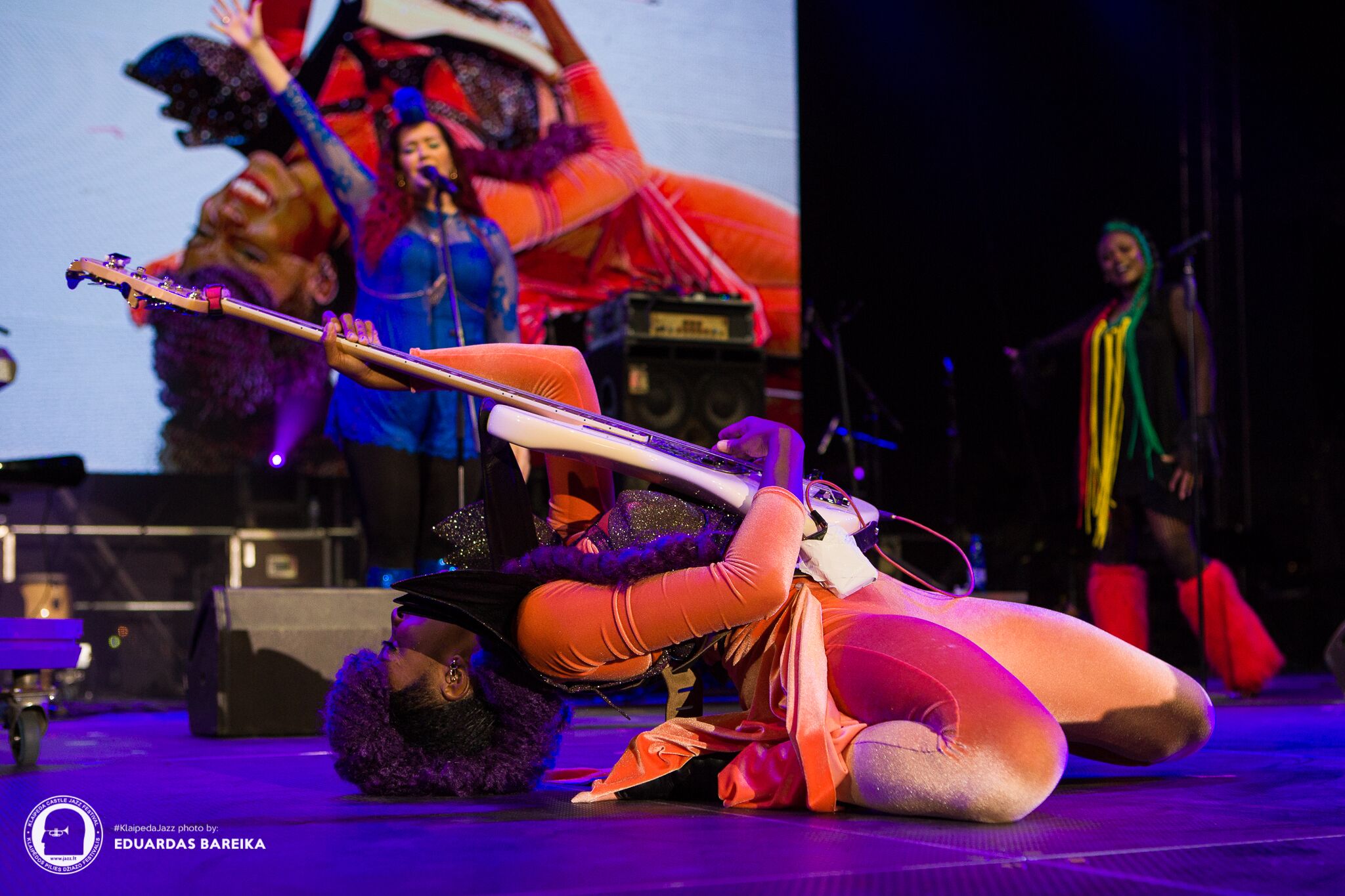 Favorite song to play live: “Prince songs are just so funky and I can’t resist—songs like “Head” and “Let’s Work” are classics and full of groove and not a whole lot of notes. I can get lost for hours in that funk music.”