Lynnay Della Lucé was born in Morristown, NJ and grew up in northern New Jersey. In 2009, she came to Atlanta to pursue better music and job opportunities and quickly made a name for herself in the local scene. She is a multi-instrumentalist playing guitar, bass, and drums as well as a singer and songwriter. Her past projects include Chaos, Rocket 88, Project X, and Ballbreakers (Atlanta’s All-Female AC/DC Tribute).

Along with various cover bands and solo projects, she currently plays in the all-original project Vices of Vanity with bassist Amy Epperley and drummer Hunter Cook. Vices’ music releases include their debut single “Hard Way” (2016), “Loud” (2017), “Zombie” Cranberries cover (2017), and their debut EP “ROWDY” (2018). The band has opened for national touring acts such as Fuel, Otherwise, Through Fire, Righteous Vendetta, and Saving Abel.

When did you first start out playing guitar?

How did Vices of Vanity come to be?

I was introduced to the people that run Women of Rock in Atlanta back in 2016, and when asked if I had a band that wanted to play shows, I said, “Sure I do!” That evening I contacted Amy Epperley who I had been working together on numerous other cover projects and said, “We need to start a band.” Luckily, she was excited about the idea, but we needed a drummer. We tried out a few local drummers but couldn’t find the “right” sound.  Out of the blue, I received a phone call from a drummer I had worked with in other cover bands in the past, and I asked if he was interested in the project. He said, “Absolutely. That drummer was Hunter Cook, and at that moment Vices of Vanity was born.

Who were your first musical influences and your current ones?

What do you like about playing originals versus covers?

I honestly love doing both, but if I had to choose, it would be originals. Covers really taught me how to play, write songs, and get to know an audience. I learned so much from playing covers, and some have really stuck with me because we make them our own. For instance, our version of “Zombie” by the Cranberries has literally become a Vices song in our fans’ opinion. I really do love when we get the opportunity to play both because our originals are like, “here this is me.” Then turn around and play a cover and be like “this is how we connect” and get to know new people in the crowd. It’s like finding a topic of conversation in common with someone new and being passionate about it and connecting on another level. Except we don’t talk…we just play a song that triggers a memory for an audience member.

Do you have hobbies outside of music?

Videography, sporting events, beaches, hanging out with friends, and playing with fire.

What is your preferred equipment?

2016 Gibson Explorer: Its sound is amazing. I don’t know why that particular one stands out, but it is all stock and all rock.

Ibanez DDL10 Vintage Delay pedal: This pedal is from the ’80s, and I’ve owned every delay pedal under the sun, and nothing takes distortion like this guy. In fact, when we recorded “Zombie” on our Rowdy EP, the producer let me use this pedal because he could not match the tone with any other gear or plugins they had in the studio.

How about guitar strings?

What are your plans for the future?

To create more music! There will be a lot more writing and recording in store for Vices of Vanity. We have upcoming recording and album plans, some crazy awesome new music videos in the works, and several regional and national tours set for down the road. Long term, we would like to headline our own US tour and ultimately tour throughout Europe and Japan. I would also like to give back to the great music community we have here in Atlanta by establishing and growing an all-inclusive multimedia company. The company would be geared towards musicians, whether young aspiring talent or already established bands and artists.

What’s your advice for young girls looking to start playing?

I cannot tell you how much I want to help, influence, and inspire young women starting out in this industry. I am part of a company called Jawbreaker Entertainment that is starting to target young women and help them with their musical journey through the industry. But that is a more in-depth topic for another day.

Bottom line, don’t let anyone tell you that you can’t do it … because YOU CAN! Don’t let anyone take advantage of you, harass you, or make you think you are not good enough to “play with the boys.” Do whatever it takes to be you and keep your integrity. Work hard. Play harder. There will be setbacks. Do not let that get you down. Never think you are “good for being a girl.” You ARE amazing, but you HAVE to work at it. Nothing comes easy, but if you keep at it, nothing will keep you down. 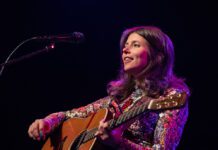 Lydia Ramsey performed at the Triple Door on October 1, 2022