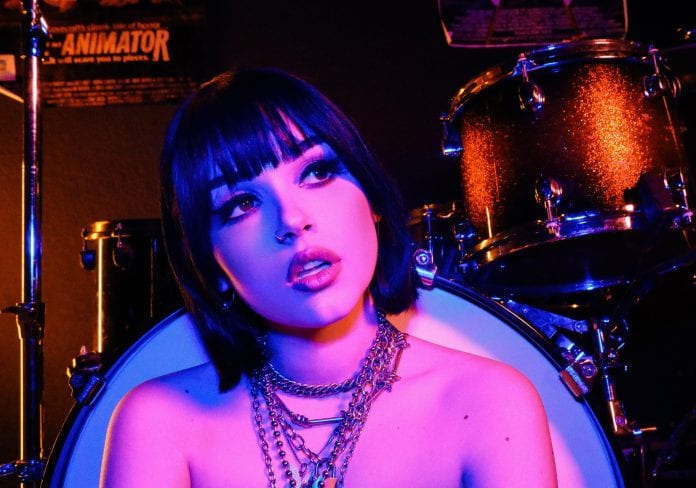 With over a billion streams under her belt, 3.4 million followers on Instagram, and having shared the stage with Sabrina Carpenter, Khalid, The Vamps, and Troye Sivan, Maggie Lindemann is a force.

To help her get used to playing guitar in front of people, Lindemann bravely documented her perfecting the instrument on Instagram. Now, having just dropped the lyric video for her single “Friends Go,” Lindemann is making the guitar a big part of her live performances.

Recently, we caught up with Lindemann to talk about the inspirations behind the track, her super busy schedule, and her pink Fender.

What was it like documenting learning to play guitar on social media?

It was cool. I’ve been playing in the studio for a really long time, like during the writing process. To start doing it, like get more in the public and on stage, it’s been really cool. It’s gotten a cool reaction, and I really enjoy playing and just having it with me on stage and playing it in my songs. So I love it.

What kind of guitar do you use?

That’s awesome. What other ones have you used?

I have a Telecaster, and then I have an acoustic.

How do you feel about inspiring others to pick up the guitar and play after watching you?

So you mentioned that your Fender Mustang is pink. How is that getting up on stage? Do you find the reaction is like, “Oh, man, a pink guitar!”

Yeah, I always see pictures people post of my guitar, and I always see just little comments about it. I think people really like it. It’s so cute. I love it. I think it’s cool because on stage I’ll usually wear pretty dark clothes and big platform heels. So I think when I pull out my little pink guitar, it’s kind of a good contrast. It looks cute and I feel like it kind of evens me out a little bit.

So your lyric video for “Friends Go” just came out. What can you tell us about that song?

So it’s about being with someone or just in a toxic situation that your friends are trying to explain to you it’s toxic, that you should get out, and just letting you know. But at the end of the day, we all do what we want, and sometimes that’s not listening to our friends. And so, as a result, they distance themselves, and you’re kind of just left all by yourself.

What were some of the influences for the track?

So it has a No Doubt kind of vibe. Definitely a little bit more in the rock direction but still pop. I wanted it to kind of have a little bit of an older feel, but at the same time be current.

You mentioned you just finished the music video. Any idea when that’s going to be released?

Yeah, so we just finished it. It was so fun to film. I think we’ll probably be releasing it at the end of the month. So definitely keep an eye out for it. I just got the first cut, and it looks so good. I’m really excited for it.

What’s up next for you after this? Do you have any plans for the rest of the year?

And you’re looking at doing your own headline tours?

Yeah. So I just did a tour with Sabrina Carpenter and I was opening up for her, which was really, really fun. That was kind of my first thing like that. Then I did shows on a UK tour with The Vamps last year. So that was really cool. And I’ve done a few things here and there. I opened for Khalid once, and I’ve done my own pop-ups and stuff, but never my own full tour. So I really want to do that.

That’s awesome. So for those seeing you live, are they going to be seeing you more with your pink Fender? Is that something you’re definitely going to keep around?

Oh, yes, definitely. She’ll be there.