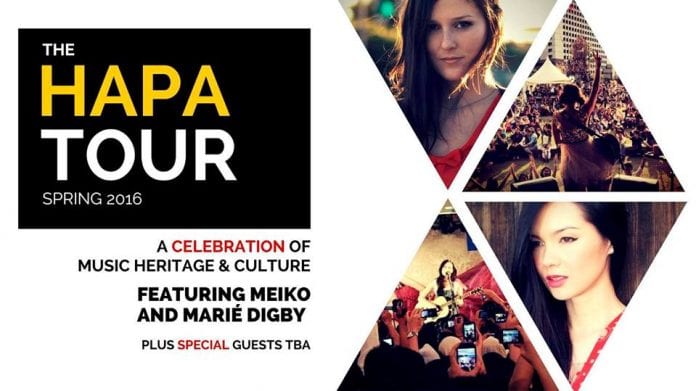 Billed as “A Celebration of Music Heritage and Culture,” the first Hapa Tour is a personal project for singer-songwriters and friends Meiko and Marié Digby. With dates in February and continuing on through March, where they are being joined by up-and-coming hapa artists in each city, the women are sharing their music and bringing awareness to what Meiko calls “Hapa-ness” — the celebration of mixed racial heritage with partial roots in Asian and/or Pacific Islander ancestry. The tour is sponsored by PledgeMusic and the USC Ito Center Hapa Japan Project.

Meiko and Marié Digby have quite a bit in common, in addition to their heritage. Both perform original material, and both have experience as independent and record-label artists. Currently, they are happily independent again and working on new albums. They recently answered questions from Guitar Girl magazine about the Hapa Tour and their upcoming projects.

GGM:  Meiko, when did the idea for the Hapa Tour first come to you, and why was now a good time to make it a reality?

Meiko: I’ve had the idea for a while. As I started meeting more and more hapa singer-songwriters in Los Angeles, a light bulb kind of went off. The more I thought about it, the more I really wanted to do it. I wanted to represent mixed-race pride and represent for all the people who check the “other” box when asked what they are.

GGM:  Did you immediately think of Marié as your co-headliner?

Meiko: I’d known of Marié for years and I have always loved her style. I knew that it would be awesome for us to sort of cross-pollinate our fans! Plus, she’s half-Japanese, so she definitely knows what’s up!

GGM:  Marié, what was your reaction when Meiko approached you about this?

Marié: I was ecstatic at the idea of being a part of the Hapa Tour! I’ve known Meiko for many years through the famous singer-songwriter venue in Hollywood called the Hotel Cafe. She actually bartended there, and I performed low-key sets from time to time. I’ve always been a huge fan of her songs and voice, so this is really cool to get to share a tour with her.

GGM:  Is this the first time that the two of you have performed on the same stage?

Meiko: We played a show together before in San Francisco and it was amazing. That was when I decided to hurry up and make this tour dream happen!

GGM:  Are you going to perform together as well as separately?

Meiko: Separately as of now, but we might figure out a song to do later in the night!

Marié: I’d absolutely be down for that!

GGM:  Where do you see similarities and differences in your styles and sounds?

Meiko: We’re similar in the fact that we’re both girls with guitars, but our style is really different. I think we complement each other perfectly.

Meiko: I’m performing solo and acoustically. I’ll probably have my Gibson B-25 Reissue with me.

Marié: I’ll be playing most of the shows solo, but I’ll have my guitarist for a few of the cities. For the most part, I’ll have my Gibson Hummingbird and a Roland Fantom Keyboard. It’s a very simple setup.

GGM:  You have experienced the music industry as signed artists on record labels and independently, and you have both pointed out the creative freedom of being independent. How did reclaiming full control of your careers help you grow as songwriters and recording artists?

Meiko: It’s a huge weight off of my shoulders. I don’t have a team of people interfering with my creative choices. It’s extremely freeing, and as much as I loved some of the people I’ve worked with at labels, I wouldn’t want to go back to that way of doing things, ever.

Marié: The majority of my career was spent on a major label. There are ups and downs to every scenario — major, independent, and everything in between. The nice thing about being independent is not having anyone to answer to, and having full creative control. But it also takes a lot of discipline because you are truly your own boss.

GGM:  You have new albums in the works. What can you tell us about those projects?

Meiko: My new record is halfway finished. The songs have all been written, and I’m just waiting to record a few more and get this puppy out into the world. It sounds like butter. More acoustic, and more introspective and shoegazey.

Marié: I’m currently writing new songs for an upcoming album. I’ve got a batch of about 20 already, but I’d like to write another 10 to 20 before I pick my favorites. It’ll definitely be a more raw, acoustic-sounding album.

GGM:  Why is the Hapa Tour important for you, for hapa artists, for audiences, and for the music industry in general?

Meiko: As far as I know, no one has really done a tour like this before. I look at it as an opportunity to promote awareness and positivity toward people who come from mixed heritages. A lot of us are here because our grandparents wanted a better life. It’s a beautiful thing that doesn’t really get talked about. I, for one, am the product of my grandmother leaving Japan after the war to follow the American Dream. She came here, learned English, and started a successful barbershop business in Georgia. I’m so proud of her for taking that risk, and I think about the alienation/pride she must have felt during that time. I guess I’m doing this to honor her in a way. I think she’d be proud.

Marié: Being Hapa is a big part of my identity, the way I grew up, the tastes that I have. I think it’s a unique perspective that most of us Hapas share, and it’s cool to be celebrating our mixed ethnicities. This particular tour is hopefully just the start of something that can grow into something much bigger.

For more on Meiko, visit her site HERE.

For more on Marié Digby, visit her site HERE.