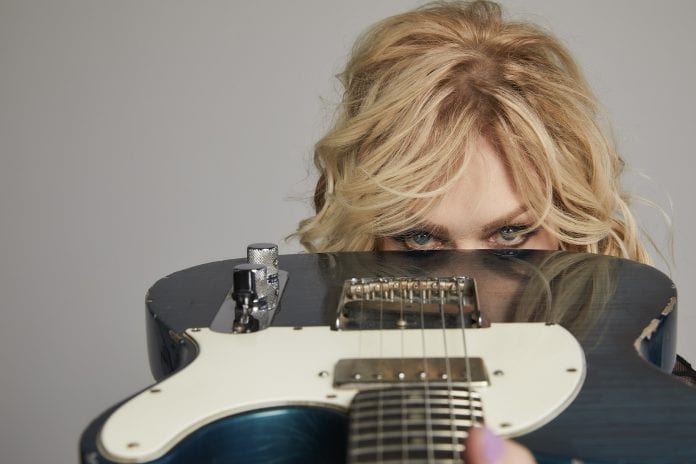 While Ann Wilson has been on the road performing her “Ann Wilson of Heart” show, sister Nancy Wilson has been busy forming a band called Roadcase Royale and recording their new album First Things First due out today via Loud and Proud Records. Nancy, together with R&B singer Liv Warfield from the late Prince’s New Power Generation band, have teamed up with former bandmates to create the new “rock and soul” band. With Wilson on guitar and Warfield as the vocalist, other band members include Ryan Waters (lead guitarist), also a former band member of the New Power Generation, along with Heart members Chris Joyner (keys), Dan Rothchild (bass), and Ben Smith (drums).

The name of the band, Roadcase Royale, came to the group during a backstage meeting they had last year. Wilson said, “When I came up with the name Roadcase Royale it was an interesting symbol to me since the big heavy-duty road cases that our amps drums and guitars travel in are much like the musicians they accompany on the road. Strong and regal looking yet all scuffed up and dented, covered in funny stickers that tell the story of a crazy traveling circus.”

We chatted with Nancy on her newest venture which she described as “a dream come true” and one she’s “really excited about.”

Liv and I first met each other when Liv’s band was opening for Heart at the Hollywood Bowl last year when we were touring. We hit it off backstage while getting to know each other. It just felt like we were supposed to be best friends. Then she said, ‘I want to rock like you rock’ and I said, ‘well, I’d like to be more funky like you are.’ So, we said, ‘why don’t we talk about getting together and try to do something?’ It just came out of a really natural place of friendship, and we made sure that we got together!

She and her guitar player Ryan from Prince’s New Power Generation came to New York and we had drinks with them and talked and brainstormed about whether we have any songs. Do we have things we could finish writing? And we all did. Rick (Nielsen) from Cheap Trick, who we were touring with at the time, was also there and we were showing him some video of Liv on the Jimmy Fallon show. He said, “Whoa, man, you’ve gotta do this thing. You’ve gotta get together and make a rock and soul band.” We all said, ‘OK, let’s do this! Let’s go to LA after the Heart tour and get into a rehearsal studio and start writing.’ And, so, between Chris, Dan, Ben and me, together with Liv and Ryan, we made that happen between other things, somehow, and within a couple of weeks we basically had almost a whole album finished.

The band’s chemistry; developing and defining their style

It’s such a natural thing the way that we work. We are all very experienced players and producers and writers and a couple of good singers. It was like a flash mob (laughs)! Six people and we know what we’re doing, so let’s do this. It’s just so satisfying and fun to get with people that really have the same work ethic and no one is trying to ego out or be the leader. Everyone is just giving each other their space and supporting each other in the musical workplace.

It’s really kind of shocking in a way to me because in most rock units there’s somebody that’s always trying to make everybody else feel like a side man, you know what I mean? In this band, there’s no side man – everyone’s a partner. That’s the way we move forward now from the way we started; we decided we’re all equal partners, share in all the writing, and it’s working really well. It’s kind of a dream come true I have to say (chuckles).

It’s really a cool thing for me as a guitar player with this band because I’ve got these incredible players – I have Ryan for instance as the main guitarist who has really got this capability of if I want to lay out, he knows how to set the stage with a simple rhythm. He’s a really good rhythm player – and he can shred! But if I want to sit out and sing, he can just lay the rhythm down for me in such a simple way that I don’t have to do everything myself. It’s the way we carry on conversations with each other as the two guitar players. We’re not talking over each other, we’re kind of listening to each other really well.

Chris is just the same way. He knows when to lay out and when to really support as a keyboard player and then Dan is a top-level player. He plays Moog bass, keyboard bass, and he plays a few different types of bass sounds that exactly characterize what the songs want to be.

So, it’s really a lot of experience and know-how thrown together in this band. I’ve played with Heart forever with a lot of different players too, and there’s been some amazing players! I love the feeling of the experience where if I break a string and have to change it in the middle of the song and lay out, the song wouldn’t suffer because these guys are good enough to just keep going and make it great. It’s one of those kinds of things. 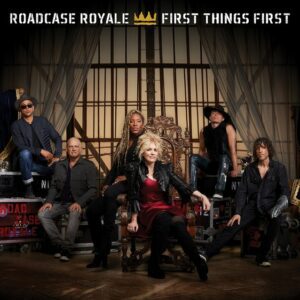 It’s actually cool in a way that thanks to Heart there’s all these beloved songs, a few of which we’re totally going to rock on the album and we rock live, as well. It creates this transitional sound that’s going to be familiar to Heart fans. We also have some new original stuff from Roadcase Royale that’s really exciting at the same time. So, I think it’s a very cool way to fashion the first album.

Another thing about our writing is that for me, I was definitely going through some loss – I was feeling some loss and some grieving – and so were Liv and Ryan with the loss of Prince. A lot of that went into our writing and our lyrics and our melodies and our parts, you know? That’s where some of that blues comes from, too. We were going through similar things emotionally when we were writing.

It will be offered in CD form, as well as downloads and streaming, and we’re hoping to do a vinyl, too. I must say I’m really excited about it!

Singles “Get Loud” and “Not Giving Up”

“Get Loud” was penned by one of my longtime collaborators, Sue Ennis, who has done a lot of work with us for Heart and I really liked her words. I took it to the band and me and Liv kind of crafted the words some more with melodies to one of Chris’ riffs and grooves. It came together so fast. We knew that there were some big women’s marches coming up at the time and we shot it out and it became a bit of an anthem for some of the big marches. We were really proud of that because I’ve seen women’s marches in the ‘60s, and then the ‘70s and beyond. I am always trying to be a champion for women and young women advocating for human equality and empowerment and pushing forward on women’s issues.

And for “Not Giving Up,” we kind of joked about the wall trying to go up at the time and we were like, how insane is that? We were basically just kind of commenting.

We’re not really a political band so to speak. The next single that’s coming out, and we’re making a video for, is called “Cover Each Other” and it’s a song that people will really latch onto. It’s a lot more about being there for each other; if your friend is falling you catch them.

I’ve said this a few times in the past. If I was going to give one piece of advice for up-and-coming girls or people that are trying to make it as a guitar player in the music business, I would say “turn back if I were you!” (Laughs) But, actually, that’s kind of been my joke because the real advice is if you’re passionate, if you can become proficient, if you work hard, if you learn from everyone and everything else that you hear from everyone you play with and everything you listen to, and be insatiable, be invincible, be doggedly determined, and don’t take no, then I would say keep going.

The band will play several headline dates and will be opening for Bob Seger & The Silver Bullet Band Silver Bullet Tour.  To find out more, visit roadcaseroyale.com.