Home Interviews Raye Zaragoza: “It’s time to rise up, turn off the television,... 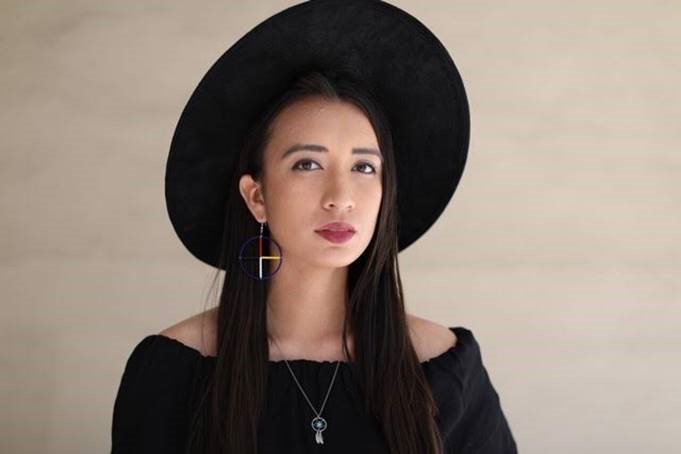 Zaragoza’s past single, “The River” was awarded No. 2 protest song in Paste magazine, as it was a response to the Dakota Access Pipeline. Her debut album, Fight For You, provokes emotion and passion while providing soothing tones of social consciousness.

Zaragoza is a symbol for modern America, and her music has been featured on Democracy Now! She tours across the United States and Europe, as she continues to be an icon for freedom, creativity, and unity.

Tell us about your early musical inspirations, and when you started singing?

I started singing when I was five or so! My Dad was on Broadway as ‘Chief Sitting Bull’ in “Annie Get Your Gun,” and I used to sing all of those songs with him. He used to give me and my siblings quarters (or a dollar if we negotiated) to sing “Annie Get Your Gun” songs at family get-togethers or dinner parties – I have seen old videos of us singing, and they are pretty terrible! By the time I was 10, I was in all of my school musicals and had been in an Off-Broadway show. When I was 11, I started a cover band with my friends and we played Avril Lavigne & Vanessa Carlton covers at a restaurant called “Purnima” on 54th Street in NYC, where I grew up. I always loved singing, but it wasn’t until my late teenage years that I started singing my own songs.

How does your Native American heritage contribute to your music?

My background has completely shaped the way I look at the world, which inevitably influenced my music. I grew up seeing the world through the eyes of an immigrant woman and an indigenous man (mom and dad), and it has shown me both the great injustices and great vibrance life can bring. My background inspires me because it makes me feel like a messenger for the stories that came before me on both sides of my family. Although my Dad did a great job of incorporating our Native heritage into our upbringing –  we were not as close to our heritage because of the American assimilation tactics of the early 1900s, and my grandmother’s experience of being taken to a boarding school and being raised by another family. Now as an adult, I am learning so much about what it means to be Native American, and to use my voice to fight for indigenous rights.

When did you start learning guitar?

I started learning guitar when I was twelve and had a huge crush on a boy in my class who played guitar. I thought if I learned how to play guitar he would like me…

I play a Seagull! I love Seagull guitars and they have been so supportive of my music.

“It’s time to rise up, turn off the television, and take a stand.”

What is one of the biggest themes in your latest video, “American Dream”?

“American Dream” tells the story of my family and challenges the outdated concept of the American Dream with its white picket fence and house in the suburbs, because it’s never been truly inclusive of all American people. In the last year alone, the American people have been under a constant barrage of distressing news, a “fake news” war waged by our President against the free press, and day after day our country feels increasingly divided. Hatred and fear have an overt national presence like nothing we’ve seen in our lifetimes. It’s time to rise up, turn off the television, and take a stand. The days of apathy are over—either we do something about the injustice happening around our country, or we admit to being a part of the problem. We can rewrite the American Dream into a new storyline that looks out for all of us. It’s a big task, but as the chorus of the song says, “Change is a choice, and it can start with me.” So, ultimately, the biggest theme is – It is time to take action.

Do you prefer singing live or in the studio?

I much prefer singing live! I have been performing on stage in musicals since I was a little kid – so live performance has always been my first love. My first experiences in a recording studio, I left crying! Singing in a studio was so foreign to me, and I had no idea how to give a good performance in a tiny booth with a microphone so close to my face. I have gotten much more comfortable since then, and had an amazing experience in the studio recording ‘Fight For You,’ but it took me years to get there.

What was your favorite part of your Germany Tour in January of 2018?

There were so many amazing parts of touring in Germany this January… but I think the #1 highlight was winning ‘Best Music Video’ for the ‘Fight For You’ video at the Indianer Inuit Film Festival in Stuttgart, Germany. There were so many incredible videos, and it was such an honor that mine was chosen. This was the first “official” music video that I ever released, and I self-produced and directed it, so it was very exciting to see it win an award.

Do you have any upcoming creative projects?

Madison Malone and I are recording a studio version of our song, “Red Moon, High Tide.” The original acoustic recording and video received 300K views on Facebook in the first couple weeks and was very well received. The song is an outcry for mother earth in regards to the recent California fires and last year’s hurricanes. I will also be going on tour opening for Dispatch this summer! I am really excited about that.

“Songwriting has made it possible for me to cope with all of my feelings and all of my frustrations with the world around me.”

Where do you turn to for inspiration in your songwriting?

I look at the world around me, and how it makes me feel. I look at the earth, the sky, the news headlines, and the people I meet when I travel. I’ve always been hypersensitive – I think I needed songwriting. When I was a kid, I had so many feelings – I was always crying! Not even crying because I was sad, I just had so many observations and dreams that I didn’t know what to do with – so I cried a lot. Songwriting has made it possible for me to cope with all of my feelings and all of my frustrations with the world around me. I think as an artist, we have to capture both the most beautiful parts of life and the darkest.

What is your best memory that combines social justice and music?

My best memory that combines social justice with music was when I met a woman who had been working at the Standing Rock media tent for months and she let me know that they would listen to “In The River” before they would go to an action. She said it “kept them peaceful” and reminded them what we’re fighting for. I started tearing up after she told me, because in that moment – I truly realized the power of music in social movements.

How would you encourage others to find their voice?

I would encourage others to start in their local communities and start to build awareness amongst their friends. I have monthly events at my apartment where my friends and friends of friends can come and share conscious art or speak their mind about current issues. It’s a great way for people to get started as an activist, and learn from others. There are so many incredible conversations that happen at my little events, and many people get inspired to take action on issues that they didn’t realize even existed. So starting small in your community is really key. So often we get discouraged to take action when we think on a large scale – but activism is something that can start amongst our smaller communities and then grow as we grow.

If you could tell your fans one thing, what would it be?

I would just tell them how grateful I am for them, and that I truly couldn’t do it without them. My supporters funded the ‘Fight For You’ album, and have made it possible for me to be an independent artist.