Home Interviews Rissi Palmer on the release of her new EP The Back Porch... 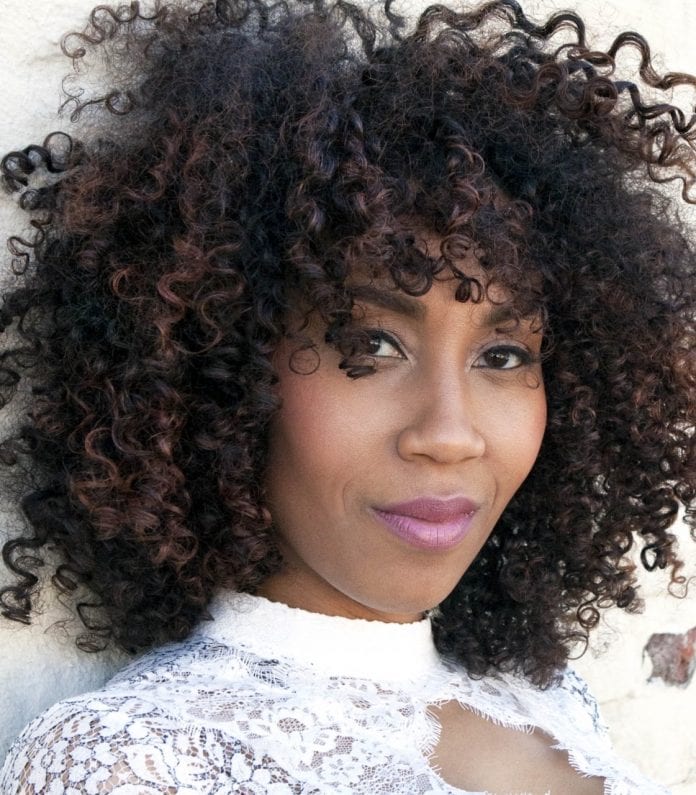 Rissi Palmer made her mark in country music with her hit singles from her 2007 self-titled debut album “Country Girl” and “Hold On To Me,” which climbed the Billboard Hot Country Songs chart to Nos. 54 and 59, respectively. This feat made her the first African-American woman since Dona Mason in 1987 to chart a country song.

Rissi followed up with her children’s album Best Day Ever inspired by her daughter Grace. And now she says it time to pay homage to her mother, grandmother and great-grandmother with fond memories of their life growing up in a small town in Georgia.

She worked with Grammy award winning songwriter/producers Drew Ramsey and Shannon Sanders on her newest release which dropped yesterday called The Back Porch Sessions – a compilation of five songs that beautifully and artistically showcase Rissi’s music she calls Southern Soul. And who knows, maybe her daughter will carry on her mother’s love of country, soul and R&B music as she can accompanies Mom on the beginning of “Sweet, Sweet, Lovin’.”

“Rissi’s new project is a transparent and seamless reflection of who she is as a person and an artist, says Ramsey in a recent press release. “The Back Porch Sessions starts at the very center of Rissi’s soul and radiates out to the world from there. The songs, the sound, all of it, are just true to who she is and I don’t know of another vocalist that does what she does. It’s that right mix of soul, twang, and church.”

“I’ve known Rissi for a while now,” adds Sanders in the release. “She’s been through a lot in the industry, but her voice, her writing—everything about her is stronger now and that speaks to who she is as a woman, an artist, a human being. Rissi is so proficient and soulfully connected—she’s ‘the perfect storm.’”

Rissi fills us in on her musical background, writing and recording of The Back Porch Sessions, progressing from the piano to guitar,  juggling motherhood and performing, and a few special highlights from her career.

Your new EP The Back Porch Sessions just released this month. Tell us about the music on your new EP.

I call this project my “conversation starter.” This EP is my first new “adult” music in nearly 7 years (I released a children’s project in 2013 called Best Day Ever), and I wanted to bring something to change and start the conversation over again about my artistry. This project has been in the back of my mind for since my first album in 2007. The music is a mix of all the things I love and am inspired by– country, R&B, and soul. It’s Southern Soul. I wanted it to feel good because I feel good. It’s “drive around with the windows rolled down” music.

What was the inspiration behind the music on The Back Porch Sessions?

The inspiration behind The Back Porch Sessions was my great grandmother’s home in Summerville, GA and how the sounds and life there shaped me as a person and an artist. Summerville is a small town between Atlanta and Chattanooga and she lived in this sweet little house. Behind her was a big Church of God and you could hear them singing every Sunday. The radio station in town played a little bit of everything so you were likely to hear Al Green and Johnny Cash in succession. I would sing for whoever stopped by for quarters and candy! I wanted to capture that joy and freedom of the little girl singing on her granny’s porch and listening to anything and everything on the radio. That’s what this whole thing is all about…

What about the writing and recording process – how did you pull together the writers, musicians and producers?

I knew exactly who I wanted to work with when I decided to make this EP happen. Shannon Sanders and Drew Ramsey (India.Arie, Robert Randolph, Lyle Lovett) produced three songs on my debut album and I’ve been in love with their style and sound ever since. They were the only ones in my opinion who could bring this to life. Once I knew they were on board, I had to raise the money! I did a KickStarter for this project and my supporters showed up in a big way. It was nerve wrecking but we got it all in late April 2014. Shannon, Drew, and I started pre-production in June 2014. I had songs that I knew I wanted on and had been saving for the project but wanted to see if we could come up with a few that were even better…we did! We ended up writing two new songs in two days. We recorded over the course of a week in August 2014.

Where do you draw your inspiration from for your music?

My life is my biggest inspiration, specifically my husband and my daughter. I wrote Best Day Ever entirely about Grace and now The Back Porch Sessions about my grandmother, great grandmother, mother, and husband.

Of the five songs on the EP, is there any one that stands out from the rest?

Hmmmmm, they’re all my babies but I think “Sweet Sweet Lovin'” stands out the most because it is the most exemplary of the southern soul sound we were trying to convey. It’s the first thing you hear and the statement piece of the project. Plus my 3 year old is singing on it so that’s pretty awesome!

Do you feel your music has changed over the years since your hit “Country Girl” in 2007?

Definitely! I think you can hear hints of my current direction in “Country Girl,” but that was a very specific statement for that time. I have grown up, matured, experienced a lot of life since that project. I think I’m a better singer and writer than I was then.

What’s your background in music and how did you get involved in country music?

I grew up singing everywhere I could…at home, at church, everywhere. I was fortunate to be in a home where music was front and center. Neither of my parents were musicians but they had a crazy music collection. There was some of everything, Phoebe Snow, Earth, Wind & Fire, Kenny Rogers, Andre Crouch, you name it, they had it. Country music was something I gravitated towards because I loved the songs. The writing was so honest and captivating. My mom liked Patsy Cline so I fell in love with her before I even knew what “country” was.

When did you first learn to play guitar and did you take formal lessons?

I started playing at 18 after years of playing the piano. I took formal lessons and had great teachers but didn’t really “get” until a man named Calvin Loatman started working with me. He was an extraordinary player and person and was so patient with me. He made me love it. He was my accompanist for years when I first started out.

Who were your early musical inspirations and were there any particular strong female artists that had a major impact on your music?

I was and am inspired by songwriters who sing and play.  People like Phoebe Snow, James Taylor, Bonnie Raitt, Dolly Parton, India.Arie, Patty Griffin. Those are the people I study and aspire to be on the level of.

Now a mother with a four year old daughter, how do you juggle motherhood and touring?

Strategically! My husband and I have to sit down with a calendar every month and basically plan every day. Being home with her and being involved in her activities is important to me so I pretty much plan my life around hers. She and her dad are my priority. Luckily, my husband’s work is really flexible so he can travel with me and work at the same time. I typically try to play over the weekends and come home right after the gig so I can be up with Grace and take her to school. It’s a juggling act but we’ve got it down.

You performed at the White House at a tree lighting ceremony back in 2008. What an honor. How was that experience?

Going to the White House was a pretty awesome experience. I remember asking my manager over and over, “Are you sure they want me?” Clearance was pretty straight forward; they checked your social security, driver license, etc. I was clean but it made me anxious. I started thinking about every parking ticket I’ve ever had and being nervous about stuff I didn’t even do! The President and First Lady were seated on the stage while I was performing so that was pretty nerve wracking…especially the huge men in black standing next to and in front of them. The thing that sticks with me about that show is that it was FREEZING and it’s rough trying to sing when it’s cold. I was more worried about my voice than anything honestly. After the performance, my manager and I were invited to a reception in the White House. I got to take a pic with the President and First Lady and the food was fabulous! We were sequestered to a particular section of the house so I didn’t get a full tour but got to see the room with Jacqueline Kennedy’s portrait and a couple other rooms.

You recorded a cover of Jordin Sparks and Chris Brown’s “No Air” and put your “Country” twist on it. Great job! How did you approach that process?

Thank you! “No Air” was something I was urged to do by my label at the time. They wanted a cover and they chose that one. Nathan Chapman (Taylor Swift, The Band Perry) and I went into the studio trying to figure out how we could make it sound completely independent of the original. I think we accomplished it as best we could.

The top 3 songs on my playlist RIGHT NOW are:

If I could perform with anyone it would be:

My favorite song I’ve performed is:

I used to close my show with a version of “Piece of my Heart” that never fails to get people up and dancing.

One thing people don’t know about me:

I love to cook. It’s a skill that I have perfected since getting married and now I love to do it for people. I come from a long line of women who cook for the people they love so I guess it was my destiny.

In one word, music to me is:

Life…it’s the air I breath…

To find out more about Rissi Palmer and to buy her music, click HERE.

The Back Porch Sessions Track Listing: