Home Interviews Roses & Cigarettes: How a love for a song inspired the duo’s... 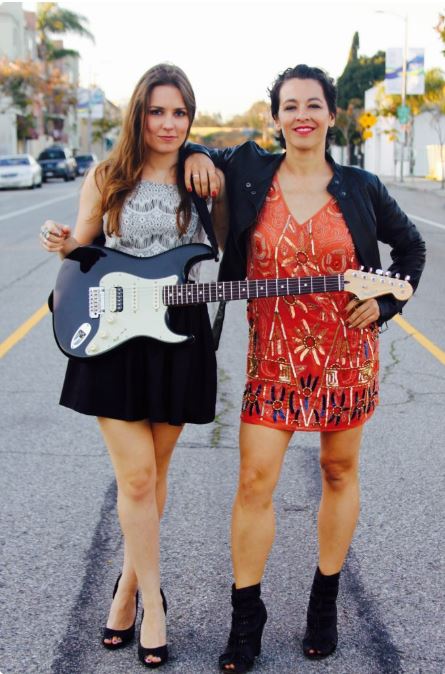 The LA duo, Roses & Cigarettes, is made up of singer Jenny Pagliaro and guitarist Angela Petrilli and they bring a mix of Roots, Rock, Americana, Country and Pop, a sound the band describes as ” a perfect recipe for the classic California sound” to the LA music scene. Inspired by a wide variety of genres from Fleetwood Mac, the Eagles, and Bonnie Raitt to Patty Griffin, Sheryl Crow, and Miranda Lambert, these different styles are reflected in their music.

Roses & Cigarettes released their self-titled debut album in 2015 but suffered a temporary setback when Pagliaro was diagnosed with breast cancer. After extensive treatment, the duo has returned to writing and touring with the release of The Acoustic Sessions EP earlier this year. Pagliaro says, “I have to take care of myself and stay healthy – that’s my priority, but my music and the band will be an important part of that healing process.”

Currently on tour supporting the EP, Pagliaro and Petrilli shared with us the story behind the band name, Petrilli’s guitars, their songwriting process, and what’s next.

How did the name Roses & Cigarette’s come to fruition? Is there a story behind the name?

Roses & Cigarettes is the name of Jenny’s favorite Ray LaMontagne song. When we first met, we bonded over our mutual love for his music, and Angela always thought that song title would make a cool band name, thus Roses & Cigarettes was born.

I completely gutted the guitar…the only thing original is the body which has been repainted with a pink to white sunburst I like to call “Petrilli Pink.”

Angela, what specific gear do you use and what drew you to the guitars you use?

As far as acoustic guitars, I play Martins. I love how they sound! For our most recent EP, Acoustic Sessions, I used my 2010 Martin OM 28 reissue. That one is my studio session guitar and the main guitar I write with. I also play a Martin 000-17E Black Smoke at our live shows and when we are on the road.

When it comes to electric guitars, I am a Fender gal! I’ve got three Stratocasters: my 2016 American Pro HSS Shawbucker, a 1999 American Deluxe SSS, and a “Frankenstrat” I built myself. It was originally my first electric guitar! I completely gutted the guitar…the only thing original is the body which has been repainted with a pink to white sunburst I like to call “Petrilli Pink.” Pat Wilkins of Wilkins Guitars in Van Nuys, CA made my vision a reality with the paint job on that Strat. He’s an artist! The guitar also has a Jimmy Vaughan signature slight V neck, and I installed Lindy Fralin Vintage Hots pickups. It’s a beast of a guitar and I love it dearly!

I’ve also got two Telecasters: an American Standard and a Mexican Tele as my five string, open tuning guitar just like Keith!

I have one of Fender’s new Mustang 90 with two P90 pickups. It’s a super fun guitar to play that sounds so different from a Strat or Tele.

I’ve always been drawn to guitar because I’m a huge fan of searching for great tone. At the end of the day, great guitar tone comes from your hands and searching for your voice as a guitar player is one of the best quests us guitar players have in our journey as musicians! When we find a guitar that perfectly complements our personal sense of tone, we’ve hit the musical jackpot! I look forward to using all of these on our next full-length album.

Jenny, how long have you been singing? I know you had some setbacks. What has compelled you to continue?

I don’t remember a time when I wasn’t singing! There has always been something inside of me that knew I wanted to do this for a living…knew I wanted to share the talent I was given. Now, more than ever, I feel like I have a message I want to get out there and writing songs and being able to sing them is such a gift.

The beautiful, warm tone of a Martin is something that is unparalleled.

Angela, during the Museum Sessions for Martin Guitar, which model were you playing and how do you feel the Martin sound impacts a live recording?

I am using a Martin 000-17E Black Smoke. It’s a great guitar – easy-to-play neck, great tone, and travels great. It’s only getting better with age, too! The beautiful, warm tone of a Martin is something that is unparalleled. You can literally hear the love and care that went into every instrument.

At the end of the day,
whatever serves the song best wins!

Jenny, would you consider yourself a singer-songwriter? How does the songwriting process flow, do you write together with Angela, or separate and then collaborate?

I do consider myself a singer-songwriter. The songwriting process varies but it usually goes one of two ways; either Angela gets an idea for a guitar part and sends it to me and I develop lyrics and melody. Or I get a song idea in my head (generally I hear almost an entire chorus) and we build the song from there. It’s INCREDIBLY collaborative and supportive. If one of us has an idea, the other supports that idea and we build it together. At the end of the day, whatever serves the song best wins!

While based in LA, how do you both feel your Americana roots congeal with the city of Los Angeles?

Los Angeles is such a diverse city with so much to offer in the way of live music! There is definitely an Americana/Roots-Rock scene in Los Angeles and we have been lucky enough to meet a lot of great musicians to collaborate with within it. We always say to find your people in LA, everybody has something different so find what resonates with you. 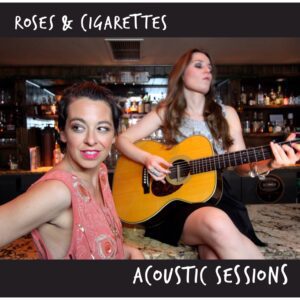 What can we expect of Roses & Cigarettes in the near future? We know you just recently completed the “Acoustic Sessions” tour. How did it feel to be back on tour?

We are loving being on tour! There is nothing more fun than being able to travel and play music. This summer we will be traveling to Nashville, playing the She Rocks Showcase, also some shows all around Los Angeles, and concentrating on recording our second full-length album!

HEAR US on Soundcloud