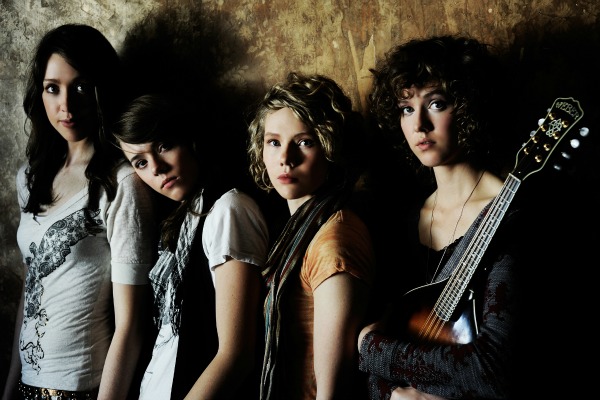 Born and raised in Fort Collins, Colorado, the multi-talented members of SHEL developed a passion for music at an early age, growing up with a professional songwriter father and an artist mother. All four sisters are classically trained musicians who began playing in church, and then in their father’s bluegrass band, before setting out on their own. Working with Grammy-winning producer Brent Maher, they released two EP’s, Try to Scream and When the Dragon Came Down, and a full-length album, Paint My Life [2012].

Violin, bass, and guitar player Sarah Holbrook is the band’s graphic designer and videographer. Keyboardist and piano player Hannah, the oldest of the four, released an instrumental five-song solo EP, Late Bloomer, in 2012. Youngest sibling Liza plays drums and percussion. Eva, on mandolin, cello, guitar, and bass, is involved with arrangements and production.

SHEL recently completed a new album, The Laboratory Sessions, which was released to fans via PledgeMusic. The crowdfunding project gave Pledgers an opportunity to listen in on the creative process via exclusive content, commentaries from SHEL, demos, alternate versions of songs, videos, and fully produced tracks. The commercial release for the album is to be announced.

Eva and Sarah Holbrook spoke to Guitar Girl about their new album, life on the road and in the studio, and the responsibilities that come with success.

How is The Laboratory Sessions the next step for SHEL?

Eva: The past year we’ve been writing and recording like mad while keeping a rigorous touring schedule. In coming up for air we’ve found a set of songs that we’re very proud of, but that won’t fit on one album. That’s how we came up with the concept for this project. We wanted our fans to have all the songs we’ve written, in addition to the album itself.

Fans have come to know and perhaps expect a certain sound and musical approach from SHEL. Does that create a comfort zone for songwriting, does it create a challenge to explore new directions, or is there a bit of both?

Eva: As a band, you have to continually reinvent yourself if you want to survive, but that’s really the point of being an artist, to explore as much as possible, capture life in new subjects, sounds, and melodies. It’s our job to create an experience. I think all that any audience expects from an artist is quality. You can do whatever you want as long as you do it with integrity. Our first official release was very experimental. The essence of our work is a sort of musical wanderlust, and I think our audience identifies with that.

How did the past two years of touring prepare you to write and record another album?

Eva: One-on-one conversations with fans provided a great deal of inspiration. Our time was also pinched; with so much energy going into travel and performance, it made creative downtime a rarity that we looked forward to. We ended up writing a lot in the car and cramming in recording sessions when we were home. I would say it stretched us and helped us better understand what we’re capable of.

In addition to your musical ideas, did performing live and receiving audience feedback give you a sense of what does or doesn’t work and which creative directions you want to pursue?

Eva: It definitely did. We’ve developed a very intimate relationship with our audience that allows us to test out new songs live. Their wonderful enthusiasm has encouraged us immensely. That’s why we’re releasing everything we’ve recorded to our fans. We’ve talked to so many different people about their favorite song after a show that we couldn’t leave anything off the album without feeling like we’d be disappointing some wonderful folks.

When the shows end, your physical instruments are put away, but your vocal instruments are with you at all times. How do you protect them in an environment of clubs, hotels, road food, changing temperatures, travel, and travel fatigue?

Eva: Lots of water and sleep. Rest whenever you can. If it’s a loud club, we try to reconvene at a quieter spot. We avoid road food by stopping at grocery stores and picking up nuts and fruit, maybe some deli meat. Most places sell organic food now, which helps a lot.

When you not only work and travel together, but also have spent your entire lives together, how do you continue to challenge each other onstage and in the studio?

Sarah: I think spending so much time together lends itself to challenging each other onstage, in the studio, in the kitchen … wherever. When you’ve lived life with someone as much as we’ve lived life together, you really get to know each other’s strong suits. Understanding what everyone is good at, and respecting that, makes it easy to call each other up when someone is needed to take over a particular project.

How has working with Brent Maher helped you grow as songwriters and recording artists?

Sarah: It absolutely has! Brent has shared so much wisdom with us over the last few years. It’s amazing listening back to when we first started working together. We were so green! We’re still growing, but it’s very rewarding to realize that the music is growing with you. Brent has been monumental in helping us grow.

Young women are a segment of your fan base. Is that something you take into consideration when you express yourselves via lyrics, interviews, videos, wardrobe, and social media?

Sarah: Definitely. Our motto is “keep it classy.” We realized pretty early that we had younger fans, and it’s a topic that comes up before every tour, especially when it comes to wardrobe. We always want to encourage anyone and everyone to be themselves.

Part of the proceeds from the pre-order of The Laboratory Sessions will be donated to Heifer International, whose mission statement is to end world hunger and poverty. How did you become involved with this organization?

Sarah: Heifer International has been one of our favorite organizations for quite some time. I remember someone gave a goat on my behalf instead of giving me a Christmas gift one year, and I just thought that was the coolest idea. Ultimately, I don’t NEED whatever gift they would have gotten me instead of donating that goat, but someone really needed that goat. When it came to picking an organization, this was absolutely unanimous.

You all cite the Beatles as one of your primary musical influences. If SHEL could have played and harmonized on any Beatles album, which one would you have chosen and why?

Sarah: I think it would have been Yellow Submarine. It was our favorite album growing up, and probably the most influential!

For more on SHEL, visit their site HERE.