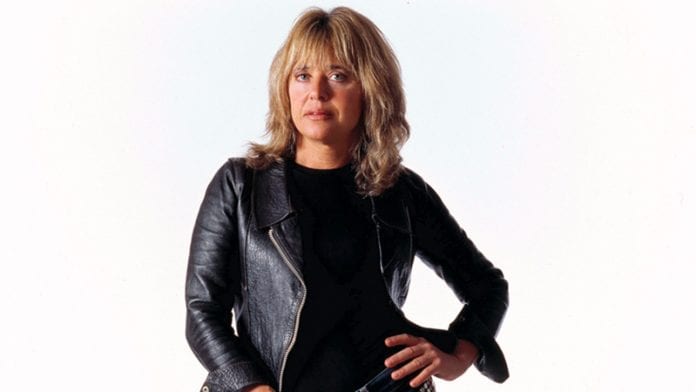 Suzi Quatro is an icon – the first female bass player to become a major rock star. She has influenced everyone from Joan Jett to Chrissie Hynde.

Born in Detroit, Suzi started playing as a teen with her sisters in The Pleasure Seekers and later in the hard-rock group, Cradle. In 1971 she moved to England at the urging of producer Mickie Most  (The Animals, Jeff Beck, Lulu, and Donovan). She was cast in the smash television series “Happy Days” as Fonzie’s rocker pal, Leather Tuscadero and had a 1973 #4 hit with the song, “Stumblin’ In,” a duet with Chris Norman.

To date, Suzi Quatro has sold more than 50 million records worldwide and is still rocking hard after nearly 50 years in the business. And as long as she’s having fun, she has no plans to retire. “When I turn my back on the audience and shake my ass, and there is ­silence,” she says, “I will stop.”

Suzi will be the Keynote Speaker and Woman of Valor Award honoree at the First Annual MEOW Con, October 24-26, 2013.

This interview appeared on meowonline.org and is used with their permission.

It has been said that you are not the archetype but the prototype of a female rock bass player. That’s a very powerful and true statement! Where did you get the inspiration for your signature “look” and sound?

Hard to pin point it, but there was a band out of New York called the Blues Magoos. They had a hit with, “(We Ain’t Got) Nothin’ Yet.” I was 14 and just beginning. I saw them live at The Chessmate, a club in Detroit. Had to lie to get in. Anyway, Ronnie Magoo, the bass player, had it low-slung. He was actually riding it. I knew this was the look for me. Then [James] Jameson of the Funk Brothers and Motown influenced me playing-wise the whole time I was growing up. And finally when we played with Canned Heat in 1968, I saw my first-ever interesting bass solo. Voila. Enter Suzi Quatro.

What would you characterize as your big break?

For sure, when Mickie Most saw me in Detroit in Cradle in 1971 and offered me a solo contract. This was it for me. My road to fame began.

Do you think your career would have been different had you remained in the US?

Jac Holzman of Elektra Records offered me a solo contract the same week as Mickie. So I would guess success would have come my way whatever. But Jac wanted me to go the Joplin route, which wasn’t really me. I was always a rocker.

What do you think are the biggest obstacles people face in doing music as a career in general and what obstacles have you had to face?

Biggest obstacle I would guess is all the rejection and never a guarantee of success at the end. I guess for me it was maintaining my success, keeping true to myself, keeping my feet on the ground, and never, ever taking an audience for granted.

Where is your favorite place to perform?

I love, love, love, playing in the USA, especially Detroit, New York and L.A. I love Australia, Japan, and Germany. I really love it everywhere. Can never get enough.

How did you get started with your radio show?

I was asked for years and years, since I had my first hit, to do radio. Apparently I have a good radio voice. I was finally persuaded to do a show in 1999. My stipulation was that I could say and play what I like. And it went from there.

You mentioned that a gig you recently played in Russia was the best of your career. What was it about that particular show that was so different for you?

It is so hard to describe. It went from high to higher and highest, spiritual, really. I had to keep stopping, walking to the front of the stage and getting huge bouquets of flowers from fans. There must have been 100 piled up on the drum riser. I’ve never seen such happy faces on so many people. I went back to my room and actually cried that I was able to give so much happiness. It really humbled me. As you can see, I am still affected by it.

Are you still in touch with anyone from the cast of “Happy Days”?

Yes. We speak every now and again. Both Henry Winkler and Ron Howard gave me great quotes for my autobiography, “Unzipped.” Garry Marshall did too, but his was not used.

You’ve had a long partnership working with Mike Chapman. Can you talk about your collaboration?

Mike and I have been on the same page since day one. We respect each other. Mike pulls great vocals out of me and I trust him. We will probably always work together. He is a big talent and a wonderful guy. I simply love him.

What was it like to write a memoir? Did it come easily or was it challenging to write?

I have a very good memory and I am a fast typist. I have my ‘ego’ room where everything is: videos, DVDs, scrapbooks, etc., so if I have a lapse, I could pull out whatever I needed and refresh. Once I came upon the idea of writing it in two people, Little Susie from Detroit and Suzi Quatro, it flowed. Of course the sad parts were difficult because it brings it all back up. My main criteria was to be honest but not hurtful. I think I accomplished that.

Can you talk about the one-woman show you’ve done, which was based on the book? Sounds awesome!

It was absolutely fantastic – a dream come true. I’ve wanted to do it for 30 years but I’m glad I waited. This was the right time. I put it all together: script, DVDs, pictures, music and arrangements. It takes you right through my life starting with me playing Beethoven on the piano (honest!) and ending with me in the jumpsuit. It was so, so satisfying to be able to finally do this. I will do it again next year.

What is your favorite component of your career – acting, playing, writing, radio, the studio?

I am first and foremost an entertainer, but I would have to say rock and roll is my home and everything else stems from there. I guess second would be acting, if I had to choose. But I love it all, which is why I have done it all. I don’t know what I would do if I couldn’t write songs and then record them. I am simply hooked on my job.

What is the key to musical longevity and relevance?

Always staying focused. Take care of your health so you can deliver the goods onstage. Most importantly, leave the performance on the stage, where it belongs. And always remember to appreciate your fans. They are why you are there.