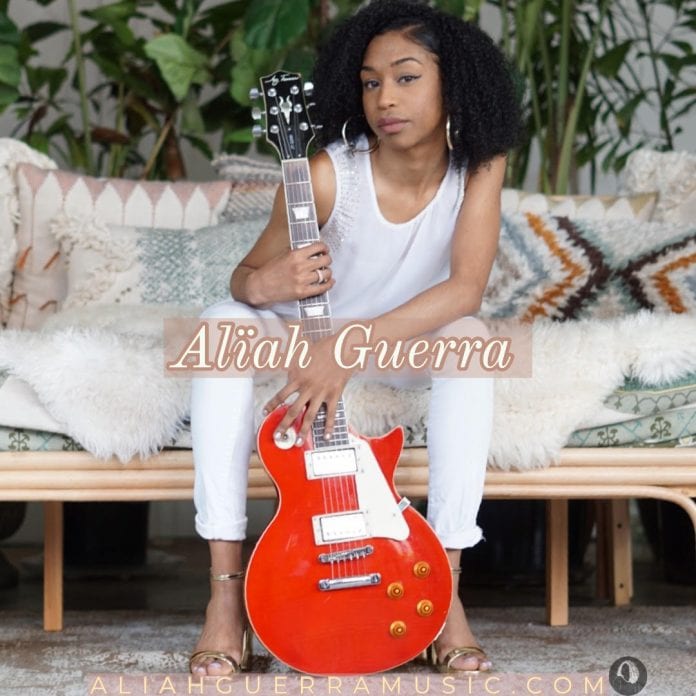 Aliah Guerra is a Canadian Trinidadian Jazz musician (electric guitarist, singer/songwriter, and producer). In the spring of 2018 Aliah independently released her self-produced Soul/Jazz Album “Sounds of a Seed.”

After Completing the 2018 TD SOCAN Creative Entrepreneur Incubator Program and performing for the Canadian Songwriter Hall of Fame Showcase 2019, Aliah had recorded a song at the famous Slaight Studio in Toronto, was mentored by Peter Cadernali (Celine Dion, Tina Marie, & Rick James), and Adrian X (Drake, PartyNextDoor, The Weeknd).

That song (now entitled “Out 2 Cali”) premiered on CBC radio nationwide, was then picked up on to the Montreal Chill playlist (curated by Spotify), and has reached over 90K streams worldwide in less than six months.

After attending several workshops and panels at Canadian music week, and The 2019 OVO Summit, in addition to SOCAN’s hands-on professional music business program, Aliah confidently decided to register her first entertainment and media company. She is now the first female, entrepreneur/business owner of her family.

What is your definition of tone, and how has it changed over the years?
Tone used to be just about guitar sonics. Now, I believe tone is the creation of an atmosphere focused on musical connection. I chose to use my art as a tool for healing by creating an atmosphere that is one with the artist/creator, the art, and the and spirits in the universe.

I’ve learned to enhance the tone of my voice, guitar, and performances by adjusting my environment, to accommodate my authenticity. This way, the healing, message, and art will be best received.

My tone of my atmosphere may include warm EQ, low lights, laid back vibe instrumentation, and smooth jazz guitars.

Tone is the experience as a whole.

Which guitars, amps, and pedals are you currently using and why?
Red JT-220D by Jay Turser (Les Paul style) electric guitar.

I like that this guitar has a very similar tone to semi-hollow jazz guitars like the ones George Benson, B.B. King, and Joe Pass played. It naturally has a really nice low and mid-end and warm tone. So when I perform stripped back versions of songs, the bass comes through creating a more wholesome sounding performance.

I chose it because it sounds rich, yet it was rather inexpensive. Starting out, I didn’t have much money to buy something fancier, but even now, I still believe the fanciest gear doesn’t make you a musician or an artist, it’s our ability to create art despite limitations.

So, I have a collection of some inexpensive instruments specifically because I want to develop my music skill first—and that is priceless.

As a self-taught guitarist and vocalist, I was a bit intimidated by the thought of adjusting pedals and gear while singing. So at first, I didn’t use them in my shows. Over the years, I had just become more comfortable with a stripped-back sound. So, a bit of reverb and chorus was all I want and need on a “fancy day.”

This amp is awesome because it’s got reverb knobs built-in, and a chorus pedal that comes with it. It has two inputs (mic and guitar). It has a naturally strong low-end output, really powerfully, and great for shows.

What about strings?
Not too picky about strings, but Ernie Ball is my personal favorite. I use their Regular Slinky custom gauge nickel wound guitar strings. I’m always plucking. I never use picks, and I find the strings are quite durable over several months. The best part is they aren’t too harsh on the fingertips on the fretboard after playing for hours.

Are there certain recording techniques you prefer in the studio?
I love, love being in the studio because I can truly be a “one-woman band.” Stacking and looping is my go-to technique and tends to spark ideas. My one voice becomes a stacked choir, while I experiment with endless simple guitar effects. Since I am very much so a “chord driven guitarist,” especially for LIVE shows, being in the studio allows me to experiment and take my time with soloing.

How do you keep your sound consistent onstage?
Having an engineer is key, but also be able to closely hear what the engineer is hearing so you can indicate to them when something needs to be adjusted is also necessary. Having monitor speakers on stage is a MUST, and as a soprano and dynamic vocalist, always have in-ear monitors; this can really make or break a performance, especially the bigger the band is. While performing, it’s not always possible to communicate the changes to the engineer right away, so I love being able to have access to control levels of my guitar directly on my guitar. And levels for my mic input on my in-ear receiver clipped into each.

What does your practice consist of?
Yoga, cardio, meditation, vocal warm-ups, running through tunes on guitar day (tab), vocal day (intonation arrangement), and lyrics (learning lyrics). Listening and playing a song hundreds of times. Start learning it from the end to the beginning, to make sure the end and beginning are on point, and all the hiccups in between are smoothed out. The goal is to be able to learn a song inside and out so I can duplicate a great performance of the song at least seven times in a row. This develops my confidence in performing the song, my muscle memory, and it allows me to have more freedom to put my own flare on it and focus on connecting with the music, and ultimately the listeners.

What is your advice for young women who hope to work in the music industry?
Be confident with your genuine true authentic self. Spend time with yourself. Get to know yourself—be patient and forgiving to yourself. There is no single blueprint for this industry or life. Find other women like you. Learn from them, share with them, and uplift and support one another. The world might not “get it,” but eventually they will as long as you keep at it, and stick to your vision.