Home Interviews Tracy Newman: Having Too Much Fun 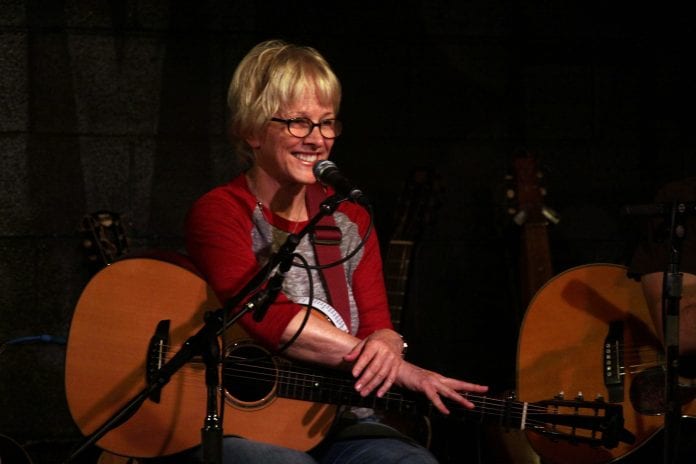 Way back in 1958, a three-man folk group called The Kingston Trio topped the charts with their version of a simple, two-chord standard from the late 19th century entitled “Tom Dooley.” That song not only made folk music a hip enough alternative to the likes of Elvis and the doo-wop of that day, but it also inspired a young woman from Los Angeles named Tracy Newman to pick up a guitar and eventually try her luck at being a folksinger. Tracy gave up a university education during the early 1960s so that she could go busking in the streets of Tucson, Arizona.

Flash forward to L.A. a decade later, as Tracy was already transitioning from folk music to comedy when she helped form an improvisational theatre company called The Groundlings, one of whose original members was her sister, Laraine, who went on to become one of the original “Not Ready For Prime Time Players” on NBC’s “Saturday Night Live.” Tracy and fellow Groundling Jonathan Stark eventually teamed up to write comedy for TV and became staff writers on “Cheers,” “The Nanny,” and Ellen DeGeneres’ mid-1990s ABC sitcom, for which the twosome won an Emmy for co-writing Ellen’s ground-breaking coming out episode. From there, Tracy & Jonathan co-created “According to Jim” starring Jim Belushi, which ran for much of the 21st century’s first decade on ABC, and is rerun constantly on many TV stations and cable channels worldwide.

The perks that come with being co-creator of a hit TV show were such that Tracy, who had been writing songs in addition to TV comedy, decided to retire from the latter to make a return to the fun that came with writing and singing her own songs. Tracy and her current band, The Reinforcements, have been delivering their unique brand of acoustic folk music to clubs throughout the L.A. area and elsewhere since 2005, and have also recorded two albums, with a third on the way.

I recently asked Tracy about how she started The Reinforcements, as well as other topics including her going from music to comedy and back again, and what happened when she sang live about her sister, Laraine.

GGM: For my first question, Tracy, what music did you grow up listening to before you caught on to the Kingston Trio and their recording of “Tom Dooley”?

Tracy: Elvis Presley, The Platters, Sam Cooke. Broadway show albums, like “Carousel,” and one called “Wish You Were Here.” And Judy Garland. I used to sit next to the record player in a rocking chair and listen to Judy Garland and imitate her. It must have driven my mom crazy, because I’m sure I was really shouting. Also, the soundtrack from “Gentlemen Prefer Blondes.” I used to imitate Marilyn Monroe and Jane Russell. My friend Wendy and I once put on a show for her mother, doing all the songs from that. I played Marilyn Monroe because I was blonde; Wendy was a brunette.

GGM: When you left the University of Arizona just as the folk music craze was picking up steam in the 1960s, did you have your share of good and bad days, business-wise, singing on those street corners?

Tracy: I don’t remember much about it. I know there was a radio DJ named David Graham, who really liked my music…or was it just ‘me’ he liked? I don’t know, but I was on the radio a bit back then. I had never written anything, so I was doing other people’s material. I don’t remember any bad experiences singing on the street in Tucson. It was pretty tame. The people there really paid attention. There was a terrific guitar player I hung out with named Michael Cooney. I learned a lot from him. He was in high school at the time.

GGM: Is there any truth to a Wikipedia entry that mentioned you as one of the original members of that great 1960s folk act and TV variety show staple The New Christy Minstrels?

Tracy: If you look at the make-up of the Christies back then, there were always eight men and two women. There was a short period in 1961 or so when the two women were me and Jackie Sparks, (Randy Sparks’ ex-wife – Randy started the group). I had been singing in a duo with Barry McGuire (before his hit record “Eve of Destruction,”) and we were kind of “discovered” together. We used to sing together on weekends at a Mexican restaurant in Westwood, CA, called the El Toril. I was in the group for a month or two…I did the Vic Damone Show with them. When the Andy Williams Show wanted the group as regulars, they needed real singers. I was an alto. So was Jackie Sparks. They needed a soprano. I was let go, as were two or three of the guys. I think they also needed some people who could read music, too. That was not me. Anyway, I was devastated. I loved the group. They put on an incredibly dynamic show.

GGM: Would you consider your involvement in the creation of improvisational comedy troupe The Groundlings a sort of transition from folk singing to a comedy and scriptwriting career?

Tracy: Definitely. I learned how to re-write at The Groundlings. Sitcom writing is all about rewriting. You usually have to figure out how to make an existing scene better, funnier…make the story stronger, etc. I learned that at the Groundlings. At that time (in the mid-’70s), a scene would be created through improv. If it was funny enough, it would go into the show, and then the rewriting process would begin. We’d watch it every night and see what worked and what didn’t work, and figure out how to make it better. In those days, a sketch might stay in the show for a year or two. We didn’t have a new show opening every three or four months like they do today at the Groundlings. We were able to really learn how to rewrite. I’m in awe of the way they work over there these days!

GGM: Following up on that, did you or any of the other Groundlings during your time there improvise or otherwise perform any musical numbers during their acts?

Tracy: Yes. There were quite a few Groundlings who could sing, and some of them were pretty good at coming up with funny lyrics on their feet. Phyllis Katz was a genius at it. She still is. I was the musical director for a few years there, at the beginning, by default really. I had seen song improv done by comedian Robert Klein at the Improv in New York on 44th and 9th. I had never seen it before then. Nor had I ever done it, but that didn’t stop me from having the chutzpah to teach it at the Groundlings!

GGM: When your sister and fellow Groundling Laraine Newman was picked by Lorne Michaels back in 1975 for NBC’s “Saturday Night Live,” did you yourself think that the idea of a comedy-variety show was innovative for its time and that it would last this long?

Tracy: No. The idea wasn’t innovative. “Your Show of Shows” (the Sid Caesar show) was live in the 1950s and very successful. But the way they ended up doing it on SNL was innovative. No one knew how it was actually going to be done. It was, of course, wonderful and exciting. But I would imagine Lorne made it up as he went along. If you look at the early shows, the “Not Ready for Prime Time Players” was only a small part of the show. Most of the hour and a half was made up of guest stars. Guest host, guest comics, guest musical acts, etc. The comedy troupe was truly just support. They quickly became the stars of the show, but that wasn’t how it started. Did I think it would last this long? I don’t think anyone did. No. Not because it wasn’t great, but just because… how could you predict this kind of longevity?

GGM: How did you find time to continue writing songs while writing scripts for TV shows?

Tracy: During most of my TV writing career, I didn’t write songs randomly. I wrote them for the shows. Whenever it seemed like a song could be used, I would write one, so it was ready. Often it wasn’t needed, but sometimes it was. I was there every day, so I knew exactly what might work. If we didn’t have to look around for a song, everyone’s job was easier. I loved getting songs in the shows!

GGM: Would you consider your return to music nearly a decade ago to be the right move for you instead of continuing to write TV scripts?

Tracy: Yes. I co-created “According to Jim” with my partner Jonathan Stark. When you create a network show that stays on the air for a number of years, it’s like winning the lottery, only not that much money, but enough to live well on for a long time. Once I knew I was set financially, it was a no-brainer. I really wanted to start writing songs, and in general, creating something without anyone telling me what to do. I’m having great fun singing with a band. It’s a dream come true.

GGM: How did you form your band The Reinforcements?

Tracy: I was singing on stage alone at the Talking Stick (when it was on Ocean Park Blvd.), and two people from the audience started singing harmony with me. I invited them up on stage. They were Gene Lippmann and Lorie Doswell. We formed a trio. Because they made me sound way better, I called them my reinforcements. Gene is still with me; Lorie left a few years ago to pursue her own career. Rebecca Zoe Leigh took her place. John Cartwright, my wonderful bass player, who was with Harry Belafonte for 35 years, saw us at Kulak’s Woodshed in North Hollywood a number of years ago, and loved the music, so he joined. I don’t remember when Doug Knoll, my drummer joined. But he fit in immediately.

GGM: Since I brought up Laraine earlier, I thought I’d ask how it felt when she got to hear you play your song about her, simply titled “Laraine,” live?

Tracy: She kvelled. It makes her cry. She loves it. She’s very proud of me, as I have always been of her. She’s my younger sister, by the way. She has always made me laugh, but I didn’t know truly how funny she was until I dragged her to an improv class in 1972 taught by Gary Austin. The class eventually became The Groundlings.

GGM: You’re working on your third CD. When will we expect it?

Tracy: It’s actually ready. I just have to get the artwork and package it. Within a year, I’d say. I can’t explain the holdup. I guess I’m just lazy.

GGM: Finally, Tracy, if Betty White can do TV shows, as well as guest star on “Saturday Night Live,” into her 90s, will you continue to be performing when you reach that age?

Tracy: I don’t know. I won’t be quitting in the near future, that’s for sure. It’s too much fun.